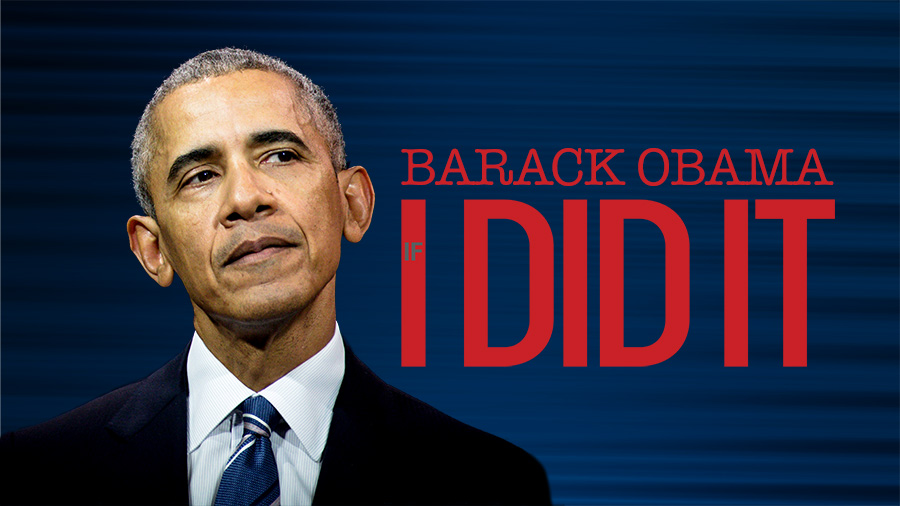 On January 5, 2017, we suffered a sneak attack on America. President Barack Obama and his administration torpedoed our democracy. They hit the ship of state in its engine: America’s sacred tradition of the peaceful transfer of power.

On that day, President Obama officially declared war on his duly-elected successor. He greenlit a black op against President-Elect Trump. One designed to paint him as a Russian traitor and paralyze his administration. Obama declared war on you, the American people.

President Obama as good as confessed all this in a call to former staffers on Friday.

Pearl Harbor at the White House

Let’s step back. Soon enough we’ll get to the soon-to-be-infamous January 5 White House meeting. But first we must tattoo on our minds the words of Lisa Page. Lisa Page wasn’t simply Peter Strzok’s paramour. She was former FBI Deputy Director Andrew McCabe’s top lawyer. Also an FBI liaison with the White House. She was in the thick of everything. And she held the smoking gun. It comes in the form of one message regarding the spy operation aimed at the Trump campaign. Page told Strzok on September 2, 2016: “POTUS wants to know everything we are doing.”

So, did they do that? Did they keep Obama in the loop? Are we meant to think they defied him?

The Deep State Cabal Gets Its Marching Orders

Only one day before, FBI agents had concluded incoming National Security Adviser Lt. Gen. Michael Flynn was innocent of any Russian collusion. They wanted to close the counter-intelligence case on him, called “Crossfire Razor.” Strzok ordered it to stay open. The “7th floor” was involved. That meant FBI top brass. That  meant Comey and McCabe.

Obama wanted to discuss what to do about Trump and the Russian “investigation.” Let The Federalists‘ Mollie Hemingway pick up the story:

It was at this meeting that Obama gave guidance to key officials who would be tasked with protecting his administration’s utilization of secretly funded Clinton campaign research, which alleged Trump was involved in a treasonous plot to collude with Russia, from being discovered or stopped by the incoming administration.

One part of Obama’s guidance? Limiting the information given his successor about the Russia investigation. Margot Cleveland picks this apart at The Federalist.

Or, rather, the only excuse is an equally scandalous one: Obama knew the Russia investigation was a hoax from the get-go.

A Campaign of Illegal Leaks

What happened in the meeting’s wake?

Remember what just-released transcripts from Obama’s top officials sworn testimony tell us. None of them had seen any empirical evidence of any Russia-Trump conspiracy. Zero. Nada.

Yet Obama’s officials and agents spent January of 2017 and beyond promoting that lie. They ran around Capitol Hill and to their media allies. They kept their story straight: Trump had colluded with Russia. Trump was a Russian agent or Putin stooge.

Obama Knew His Men Were Lying to America

Here’s a simple question for liberal friends who doubt Obama’s central role. Are you ready? When stories of Trump-Russia collusion began running 24/7, why didn’t Obama say, “Hold up. There’s no empirical evidence of that!”? Where’s Obama defending the office of the presidency? Nowhere.

All Obama’s key players knew there was no evidence. Each was involved in some way in the Trump-Russia Collusion op. But Obama and Biden didn’t know the whole thing was a sham? No. That’s simply not possible.

Obama was a details guy. He demanded that his minions keep him in the loop. (Repeat this like a mantra: “POTUS wants to know everything we are doing.”)

POTUS (Obama) knew there was no evidence against Trump. Or any of his associates. POTUS knew the Steele dossier was bogus. And that Hillary had paid for it. Yet he let the coup d’etat roll.

Why? Strzok had tweeted Page in August 2016, “The White House is running this.” The Trump-Russia Collusion Black Op was an Obama operation.

Many have long suspected that Obama was neck-deep in this seditious conspiracy. Remember when Trump tweeted in March 2017 about how Obama “wire-tapped” him? And was widely mocked?

What was Obama’s official response? It wasn’t “That is a preposterous lie.” Nor “Trump is delusional.” Nor even a simple, “No spying occurred.” A spokesman said: “A cardinal rule of the Obama administration was that no White House official ever interfered with an independent investigation led by the Department of Justice. As part of that practice neither President Obama nor any White House official ever ordered surveillance on any U.S. citizen.

And now, we also know Obama was directly engaged in an “independent” investigation led by the DOJ.

After the main meeting, Obama asked Yates and Comey to stay. According to Yates, she was shocked when Obama started talking about Flynn’s call with the Russian ambassador Sergey Kislyak. How would he know? Yates said Comey mentioned the Logan Act … which would be used to set the trap for Flynn.

Why didn’t Obama have the normal, patriotic reaction? And blurt out something like this: “You’re going to try and use a 220-year old law that’s never been successfully prosecuted? Against a three-star general who happens to be doing the traditional task of an incoming National Security Advisor?”

He didn’t. Obama didn’t throw Comey out of the Oval Office. He sent him, with blessings, to sand-bag and lie to Trump.

On January 6, a day after the meeting, James Comey went to Trump Tower. Exactly as planned, he briefed Trump on only the “salacious details” of the Steele dossier. He told Trump CNN had the dossier, but was waiting for a news hook to run with it. Miraculously, Comey barely got back to his towncar before CNN ran a story about their meeting. They had their hook. And the sham investigation went public.

So why did the FBI director leave the incoming President of the United States defenseless? The dossier’s release could cripple Trump’s ability to govern and certainly paralyze relations with rival Russia? Comey knew that. Why deliberately hurt national security?

Comey says he, Clapper and Brennan had worked out that strategy after the Obama WH meeting. But Obama didn’t know that was the plan? Of course he did. He’d just gotten done talking to them about keeping Trump in the dark.

If Obama wasn’t behind what happened at Trump Tower, Obama would have been furious. “Who leaked the meeting? Why didn’t you tell Trump the source of the dossier?” In fact, had he not been behind the plan, he would have been honor-bound to call Trump himself.

Susan Rice, on the day of the inauguration, wrote a bizarre email to herself. The goal was to memorialize the January 5 meeting. Three letters: C-Y-A. Rice claims Obama insisted that all his top officers act “by the book.” Rice should have asked which book. (Rules for Radicals, maybe?) As the Flynn documents prove and the transcripts demonstrate, nobody followed our law books. Take just one example. Comey’s trick of sending FBI agents into the White House to nail Flynn without informing WH counsel had Yates in a fury. Distinctly not “by the book.”

An FBI director keeping vital information from a President? Definitely not by the book.

The CIA director lying to the House Minority Leader Harry Reid about dossier was verified? Egregiously not by the book.

Political appointees and officials running to the media, talking about Trump’s dangerous Russian collusion activities and the fear Trump’s team would destroy the evidence. (Remember there was no evidence, by their own admission under oath.) Outrageously not by the book.

The constant illegal leaks? Seditiously not by the book.

The spying on a rival political campaign, the FISA warrants now exposed as complete garbage? Tyrannically not by the book.

But did Obama protest? Was he indignant that his orders to be “by the book” were not carried out? Has he uttered a peep against any of the investigations and revelations made in recent months?

No. Not a sound. Then again, perhaps we’re looking at this wrong. Perhaps Obama was talking about a different book. In this case, a textbook case of a CIA Black Op against a hostile government. Except this time, the government targeted was the United States of America under the duly-elected president, Donald Trump.

Former President Obama has reacted to the DOJ decision to drop the prosecution of Flynn. Did he look at the very clear, indisputable evidence that the FBI set Flynn up? And applaud the decision? No. He did not.

Instead, he told former staffers Friday: “There is no precedent that anybody can find for someone who has been charged with perjury just getting off scot-free.” First off, plenty of people get charged with perjury and not convicted. Second, the government never charged Flynn with perjury. Third, draining your bank accounts and losing your house is hardly escaping scot-free. So much for Obama the constitutional scholar.

Obama continued: “That’s the kind of stuff where you begin to get worried that basic — not just institutional norms — but our basic understanding of rule of law is at risk.”

Former congressman Trey Gowdy was aghast; said it was an “amazing statement.” He demanded:

Where is [Obama’s] respect for the rule of law for the crime that Michael Flynn was the victim of? … Remember, he was unmasked by somebody in Obama’s administration and then it was leaked … that is a 10-year felony, to disseminate classified information. Michael Flynn was a victim of that crime.

Former President Barack Obama said that he approved of what the Deep State did to General Flynn. He expressed zero shock that the Trump-Russia Collusion Hoax was pushed by his top officials even though they admit under oath there was zero empirical evidence. He has confessed his role in bringing it about.

It’s no wonder #ObamaGate is trending. Over 2.5 million tweets over the weekend. As his mentor Rev. Jeremiah Wright said after 9/11, “The chickens are coming home to roost.”