My Amazing Encounter With Muhammad Ali 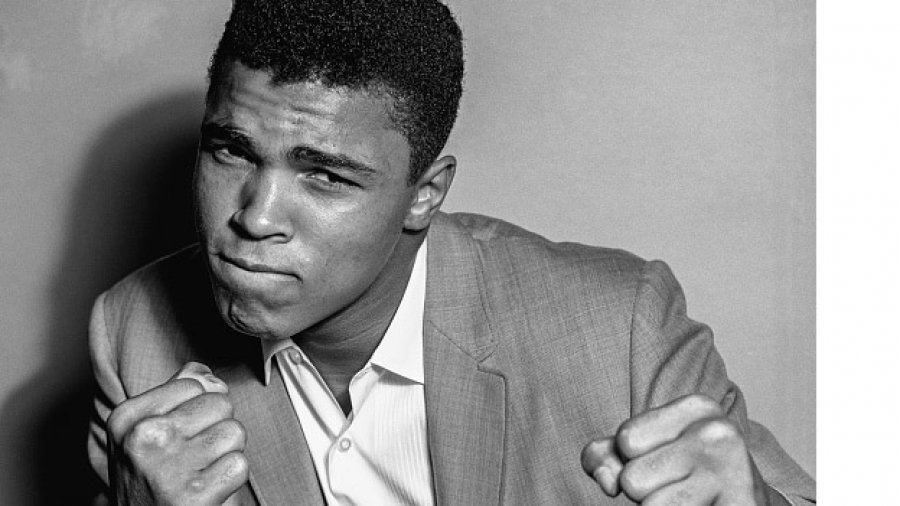 When Muhammad Ali died Friday at the age of 74, I thought back to the day when I was privileged and very surprised to meet with him privately not long before his retirement from the ring. I was in Southern California for an interview on a television network, and I was riding with publicist Duane Ward, one of those people who can open any door and who sees every challenge as an opportunity. We were somewhere between Hollywood and Beverly Hills when the driver pointed to a house we were passing and said, “There’s Muhammad Ali’s house.”

When the driver obliged, Duane said, “James, I’m gonna go see if he’s home; see if he knows you.”

I said, “What? You can’t do that. You can’t just walk up to somebody’s door like that.” But Duane was already out of the car and on his way up the walk.

A few minutes later, he came back to the car and I could see somebody standing at the door of the house.

This is crazy, I said to myself, but I got out of the car and walked up to the front door. As I stepped into the entryway, I saw a room off to the side with a prayer rug set out on the floor.

I shook hands with Ali, and before we even sat down to visit, he said emphatically, “I am the most famous person in the world.”

His boldness knocked me back, but I responded, “I think you’re right.”

As you listen to comments now after Ali’s passing, you hear that thought confirmed by many people. No doubt he was. I have been around a lot of famous people in my life, but being in the same room with Muhammad Ali was clearly something different. I found myself thinking as I stood there in his house, This has to be a miracle.

As we talked, Ali told me that some prominent Muslim leaders had approached him about becoming a Muslim evangelist after his boxing career was over.

The conversation moved away from that discussion, and I began to tell him my life story — about being the product of a rape and growing up in poverty; about nearly killing my dad in self-defense; about my Christian conversion and how the Holy Spirit took control of my life; and how God turned the shyest kid in school into a very bold spokesman. And Ali indicated he had heard me.

As we continued to visit, he expressed interest in some of the parallels between his own experience and mine — the kinds of places I had lived and the pressures I’d felt. I told him I knew what it felt like to be in the minority — as a minority white. Where I grew up in Austin, only 10 or 15 percent of the population was caucasian, with the majority being hispanic and some blacks. I told him about the gang fights, and the fear, and the difficulty of growing up without a dad.

At one point Ali said, “Come in here, let me show you something.” He took me into the room where I had seen the prayer rug and he got down on the floor and showed me how he prayed.

“I’m a Muslim,” he said, “and I do this several times a day, facing Mecca.” This was in the early 1980s, before there was much awareness in America about the Muslim faith. So this was all new to me. He told me all the particulars of how he prayed — how often and how long. And it was obvious that he was very dedicated and sincere about what he believed.

After we returned to the living room, I began to tell him about how sincere I was in my relationship to Christ.

“Jesus is the white man’s God,” Ali said, though he made it clear he had some respect and regard for Jesus as a prophet or a great man — but not in the same class as the prophet Muhammad, to his mind.

We reached a point where the conversation had run its course, and I was shocked to discover that Duane and I had been there for almost two hours. As we stood up to go, I extended my arm to show Ali what my reach would be if I were a boxer. Though he and I were about the same height, six foot three, I’ve always had long arms.

“Could you get inside this jab?” I asked.

With a smile, he put his fist forward and I could see that his jab would not reach either my chin or my chest, because my arms were so long—37 inches to the wrist.

He told me he was so fast it wouldn’t matter — and no doubt it wouldn’t have. We both stood there and grinned at each other.

All this time, Ali was his usual eloquent self — “float like a butterfly, sting like a bee; nobody in the world can keep up with me” — and he could not have been more gracious to his two drop-in guests.

As Duane and I left the house, Ali surprised me by walking all the way out to the car with us.

“You know,” I said, “it would really be great if you were communicating for Jesus.”

“But you are the most famous person in the world, and Jesus can change people.”

He said he didn’t like how Christians were inconsistent and didn’t treat each other right. And sadly, I couldn’t argue with that. But I kept coming back with the love of God, love for Ali, and how much I admired and respected him. I asked if I could say a prayer before we left, and he agreed.

Just before I got into the car, Ali looked me straight in the eye and said, “You know, if I’d met someone like you a long time ago, I might love the white man’s Jesus.”

“You know, I think I’m going to come and hear you preach sometime in person.”

“I have learned to live my life one step, one breath, and one moment at a time, but it was a long road. I set out on a journey of love, seeking truth, peace and understanding, I am still learning.” Muhammad Ali, The Soul of a Butterfly, p. xix.

“Well if you do, I want you to sit on the platform by me. I want everyone to know you’re there. And I would like you to go up and greet the crowd.”

“No, I’m not going to do that. I don’t even really want to sit on the platform. I’ll just sit out front.”

Ali reached out and put his arms around me and pulled me into one of the most loving, meaningful embraces that anyone has ever given me.

“You should be a spokesman for Jesus,” I said. “Be a witness for Jesus.”

He just looked at me and smiled as I got into the car.

I continued to pray for Muhammad Ali for the rest of his life, and I wish I could know what transpired in his mind and in his life after our conversation. I do know that Ali wanted people of faith to get along and treat each other with love and respect. And I know that he did not become the Muslim evangelist that others had asked him to be. He did not accept the offer to travel like the president on his own 747. I can only hope that God touched Muhammad Ali at the end of his life and that the most famous man in the world finally met the greatest man to ever walk the earth, Jesus Christ.