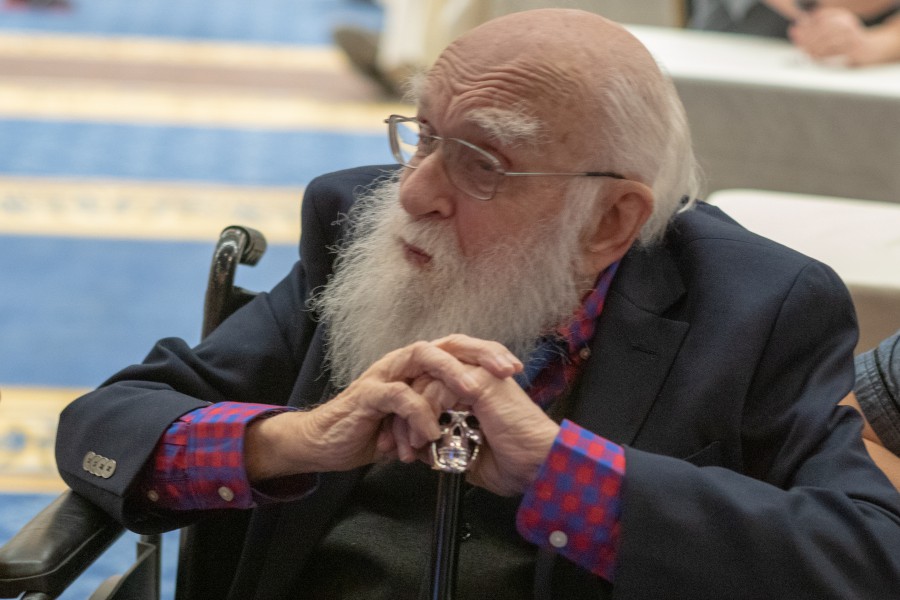 The Wizard of Oz is more believable than Christianity, he said, and more fun too. The magician James Randi rejected any belief in the supernatural and enjoyed exposing the frauds. He has died, at the age of 92.

There were many frauds to expose. He performed a public service. The once famous “psychic” and tv celebrity Uri Geller, for one. He claimed to bend spoons with his mind. It was a trick, and Randi showed how he did it. Geller sued him and lost.

Alas, among the frauds Randi included Christianity, and for silly reasons. Worse, his skepticism led him to an inhumane, even inhuman, idea of others.

Randi declared in a kind of manifesto that “I know and accept the real world.” Real means without God. His idea of the “real world” led him to one of the grosser forms of social darwinism.  He thought, in the famous words of the villain Scrooge, “If they would rather die, they had better do it, and decrease the surplus population.”

He expressed this idea of humanity in his view of drug users, in a post on his website in 2009. Drugs should be legalized, because “drug prohibition is causing far more harm than good.” He could be right about that, but he couldn’t stop there. We shouldn’t worry about the victims. “Those individuals who were stupid enough to rush into the arms of the mythical houris and/or Adonis’s they would expect to greet them,” he says, “would simply do so and die — by whatever chemical or biological fate would overcome them.”

It gets worse. “The principle of Survival of the Fittest would draconically prove itself for a couple of years, after which Natural Selection would weed out those for whom there is no hope except through our forbearance, and I’m very, very, weary of supporting these losers with my tax dollars.”

After claiming that Prohibition didn’t work, he continues: “Any weeping and wailing over the Poor Little Kids who would perish by immediately gobbling down pills and injecting poison, is summoning up crocodile tears, in my opinion. They would — and presently do — mature into grown-up idiots, and Darwin would be appalled that his lessons were ignored.”

He made the same point in his comments in a book called Heretics: Adventures With the Enemies of Science. The journalist Will Storr asked him about the words I’ve just quoted.

“I’m a believer in Social Darwinism,” Randi said. He didn’t want a child to die that way, he said, but adults, sure. “In general, I think that Darwinism, survival of the fittest, should be allowed to act itself out. As long as it doesn’t interfere with me and other sensible, rational people who could be affected by it. Innocent people, in other words.”

As with the first quote, it gets worse. “These are stupid people. And if they can’t survive, they don’t have the IQ, don’t have the thinking power to be able to survive, it’s unfortunate; I would hate to see it happen, but at the same time, it would clear the air. We would be free of a lot of the plagues that we presently suffer from.”

Judging from his comments on legalizing drugs, I don’t think Randi would really hate to see it happen. His kind of darwinism gives him cover to sound more humane than he is. Unfortunate, he says, with a shrug, but inevitable. And, look, it would save the rest of us from a lot of problems. The world improves when such people die off.

It tells us we don’t need to care about others, when caring gives us no evolutionary advantage. G.K. Chesterton saw the cold-bloodedness of social darwinism over 100 years ago. “Darwinism can be used to back up two mad moralities,” he said in his 1908 book Orthodoxy. (I’ve slightly trimmed the quote here.) “The kinship and competition of all living creatures can be used as a reason for being insanely cruel or insanely sentimental. That you and a tiger are one may be a reason for being tender to a tiger. Or it may be a reason for being cruel as the tiger.”

Or as indifferent as the tiger. The tiger needs to eat. He feels no concern for the feelings of the animals he eats. Why should he? He’s a tiger and the animal in front of him is dinner. A tiger who could speak his thoughts might tell you that survival of the fittest should be allowed to act itself out. He is one of the fit. He does not need to care for the unfit. Maybe it’s unfortunate that the unfit get eaten, but it happens. And eating the unfit makes the world a little better.

That’s what James Randi’s skepticism led him to. Stupid people should die. Be a tiger, he says in effect. Don’t be human.

Randi reportedly denied saying the words Storr quoted. But the denial appears nowhere else I can find, including Randi’s own website. I don’t believe him, partly because the quote he kept on his own website is thoroughly social darwinist. Others have raised questions about his honesty. One of his fellow skeptics has said she heard the recording and it is accurate. That a social darwinist would lie about being a social darwinist should not surprise anyone. Lying’s only a survival strategy. The fittest say what they need to say to get ahead.

The picture of James Randi is used under a Creative Commons 4.0 license.