After decades of playing villainous roles on-screen, actor James Faulkner shares the personal impact of portraying Paul, Apostle of Christ in the hit film out on DVD today. 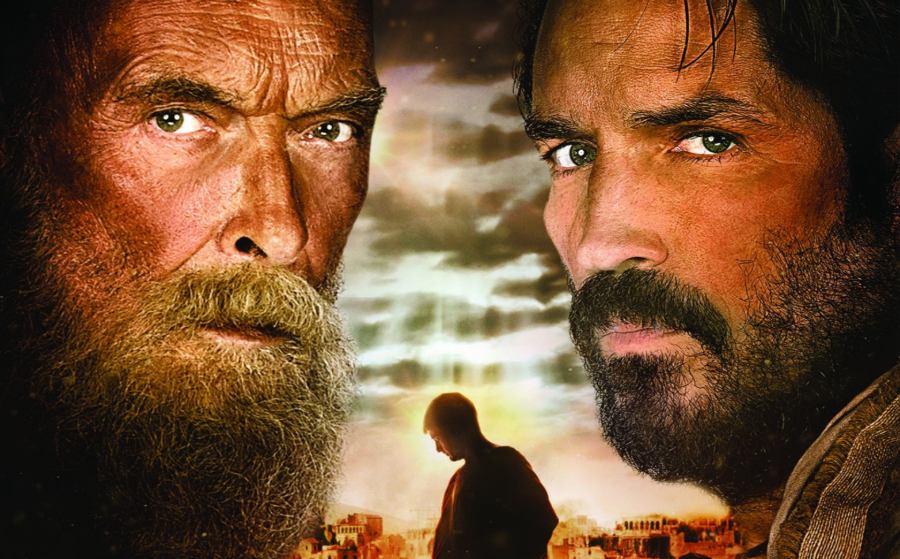 Today, audiences who missed Paul, Apostle of Christ in theaters get another chance to experience it as the film releases to home media. Riding this year’s wave of successful faith-centered movies, the biblical flick earned over three times its small budget.

Paul, Apostle of Christ dramatizes the first-century Christian leader’s later years in prison and his appeals to Roman authorities. Jim Caviezel (The Passion of the Christ, Person of Interest) co-stars as Luke, who covertly connects believers in Rome with their captive apostle. In flashbacks, the film shows Paul’s life-changing encounter with Christ — like the day of Pentecost, a key moment for the early church.

A familiar face portrays the persecutor-turned-preacher: British actor James Faulkner, with over 100 roles in films and TV shows since 1971. “It was really Paul that brought the faith to a wider church, in the face of everything,” he says.

Lately seen in severe and even villainous roles in Games of Thrones and the Underworld films, Faulkner admits playing Apostle Paul presented challenges. The veteran actor spoke with The Stream in a phone interview from London, England.

The Conversion That Shook the World

The Stream: What surprised you most about this project? James Faulkner, as the Apostle Paul.

James Faulkner: It was a wonderful surprise that this script even came to me. I’m an old pro actor after 48 years in the industry. I do the next job, and the next — then suddenly I am confronted with playing Paul.

It gets quite weary playing the tough guy. In Game of Thrones, my character Randyll Tarly was really a piece of work. But there’s another side I am capable of doing, who I am underneath. One reviewer was kind enough to say, It was inspired casting to cast an actor usually known for his harsh roles.

Saul was an enforcer for the Sanhedrin, driven to find and persecute Christians. Then he is struck down and has the error of his ways revealed to him. My wife attempts to do that for me on a daily basis, and I am better for it!

The Stream: How did you overcome the challenges of portraying Paul?

Faulkner: I landed the role on short notice, which was a bit alarming. It’s a real responsibility to play Paul right.

Though my wife couldn’t be with me on Malta, she helped prepare me for the role. She had broken the script down, showing what lines to memorize every day. It was like she cut steps into the mountainside for me, and up it I went.

Paul is a much better man than I am usually allowed to be on-screen! His journey taught me a great deal about myself and humanity. This difficult man is given his redemption in quite an extraordinary way.

The Stream: Filming on the island of Malta, where Gladiator and Troy were shot, what was the daily routine like on-set?

Faulkner: I had been on Malta 38 years prior, filming Ray Bradbury’s The Martian Chronicles with Rock Hudson in the lead role. Being the leading man can be grueling, I found. Our days were usually midday to midnight, sometimes stretching to 3am.

In the morning, I would have two hours with our dialogue coach to prepare the lines for the day. Then off we would go to do all the takes it requires to deliver a few pages of the script. When we finished a day’s work, I collapsed — and did it all again the next day.

Yet with Jim, Andrew, Joanne Whalley and such a great cast, we all felt able to do it.

The Stream: Most of your scenes are shared with Jim Caviezel, who plays Luke the Evangelist. Could you talk about collaborating with him?

Faulkner: Jim is a good, decent, devout guy, and we got along fine.

Two things you have to know about Jim. One, he’s a big baseball fan and once played quite well. Being an Englishman, I know nothing about baseball, though a lot about cricket. Second, our saving grace is that he loves motorcars — as do I. We always had a touchstone. If ever we failed to understand each other, we could talk about cars.

As a practicing Catholic, Jim is a truly religious man. I admire and respect him for that. Our writer-director Andrew Hyatt was educated as a Jesuit. Whereas I’m Anglican lite, you could say. If I had a question about Scripture or some aspect of the Christian faith, I had Andrew and Jim whom I could ask.

Personal Impact — and Responding to Critics

The Stream: Did portraying Paul influence your own walk of faith?

Faulkner: Regarding my own walk of faith, I am not fully resolved as to what to do. I noted I am Anglican lite. I was born three years after the Second World War. Because of the turmoil in the U.K. during that time, I have yet to be baptized.

At age four, one of the first stories I learned was the conversion of Saul. I can recall simple illustrations from a child’s introduction to the Holy Bible. Yet my parents didn’t marry until I was five years old — so a lot got left out in those days.

I still have a number of ends to tie up before I meet our Maker. I have some choices to make, and I wrestle with them as we speak. Let’s just say I welcome the company of devout friends and am open to talking about matters of faith.

By showing what love and redemption look like, I believe this film addresses the hatred in our world. It has certainly impacted me.

The Stream: Some expected to see more of Paul’s world travels in this film. How do you respond?

Faulkner: Paul’s life was action-packed — the shipwrecks, chased from town to town, stoned twice. Wouldn’t it be fantastic to do the whole thing? But that’s another film, or even a miniseries.

There are limits to a 23-day shooting schedule and a budget of five million dollars. The director was wise to contain the story to a pivotal period in Paul’s life in Rome.

We have Luke, who bribes his way into the prison and persuades Paul to tell his life story. He took it down and that became the Acts of the Apostles, with flashbacks to moments like the road to Damascus. Really I defy anyone not to be moved by it.

Sony Pictures’ film Paul, Apostle of Christ is now available via digital services and releases June 19 on DVD and Blu-ray. It has been rated PG-13 for some violent content, related to first-century persecution of believers.