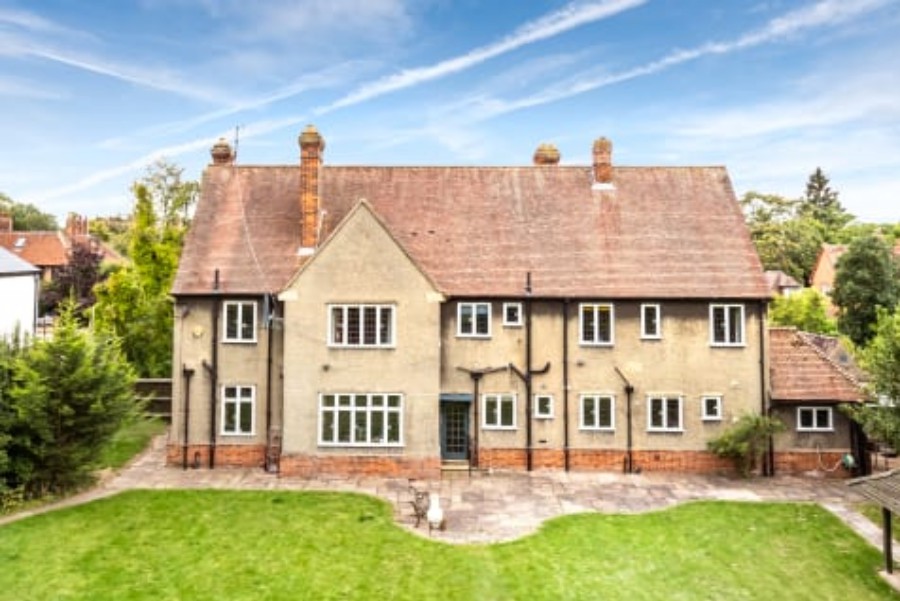 The back yard or garden of the Tolkiens' home in north Oxford today.

You’ll see the quote pop up on the web. It’s the marriage advice J.R.R. Tolkien gave his college-age son in 1941, when he was just about to join the army. The people sharing it often add a goopy description of the Tolkiens’ happy marriage. Here’s the secret to having a marriage just as happy as theirs! It’s the kittens and butterflies view of the Christian life, and it’s rubbish.

These people miss the real lesson. The Tolkiens’ marriage wasn’t exactly happy. Successful, seen over the 55 years they were married, but not happy in the simple sense the writer means, until maybe near the end. They struggled some. What we know suggests ongoing tension and stress as well as pleasures.

Ronald and Edith were very different people, not people you would match if you were asked to pair up a man and a woman. He was a great scholar. She wasn’t well educated and not much interested in ideas. He loved Oxford, she didn’t. He enjoyed serious conversation, she enjoyed small talk. Ronald wanted evenings out with the guys. Edith wanted him home.

He was very religious, she wasn’t. She entered his Church when they were engaged, but not too long into their marriage left it. She doesn’t seem to have cared about the spiritual things that meant most to him on earth. It’s hard to think of a greater, more painful, split of mind and spirit than that.

Not exactly a happy marriage. A minimum of kittens and butterflies. Which makes his advice all the more useful.

They Rescued Each Other

Ronald and Edith fell in love when he was sixteen and she nineteen, when they were both lonely orphans living in the same lodging house. His guardian kept them apart till he turned 21, so that he’d continue his studies, which would give him a living. They reunited, got engaged quickly, and married as soon as they could. They might not have married at all had their teenage romance been allowed to fade out.

Near the end of his life, after Edith died, he told his son Christopher how difficult their marriage had been. “Someone close in heart to me should know something about things that records do not record: the dreadful sufferings of our childhoods, from which we rescued one another, but could not wholly heal wounds that later often proved disabling; the sufferings we endured after our love began — all of which (over and above personal weaknesses) might help to make pardonable, or understandable, the lapses and darknesses which at times marred our lives — and to explain how these never touched our depths nor dimmed the memories of our youthful love.”

In 1941, when he’d been married 25 years, Tolkien wrote his second son Michael a long letter about men and women. He was already a little famous, The Hobbit having appeared and been a hit in 1937. A student at Oxford, 20-year-old Michael was about enter the army. He wanted Michael to be realistic about relation of the sexes.

The romantic idea of men and women, he warned, can take “the young man’s eye off women as they are.” They are “companions in shipwreck not guiding stars.” The idea makes young men “forget their [the women’s] desires, needs and temptations. It inculcates exaggerated notions of ‘true love,’ as a fire from without, a permanent exaltation, unrelated to age, childbearing, and plain life, unrelated to will and purpose.”

That idea of “true love” makes young men and women “look for a ‘love’ that will keep them always nice and warm in a cold world, without any effort of theirs.” Men can feel like leaving when they find that this love hasn’t done that.

The Mistake of Marriage

Tolkien proceeds to describe the way men and women relate to each other, to warn Michael about the dangers of mistreating women to whom he’s attracted. Then he turns to marriage. Women, he says, are naturally monogamous but men aren’t. The male’s “animal nature” means that remaining faithful to one woman is something the man only understands through revelation, as a matter of faith.

We’re too fickle for that. We change too much through life. “When the glamour wears off, or merely works a bit thin, they think that they have made a mistake, and that the real soul-mate is still to find. The real soul-mate too often proves to be the next sexually attractive person that comes along. Someone whom they might indeed very profitably have married, if only —.”

It’s not what we want by nature, he says, and getting what we want by nature keeps us from getting what we really want. In a fallen world, “the best cannot be attained by free enjoyment, or by what is called ‘self-realization’ (usually a nice name for self-indulgence, wholly inimical to the realization of other selves); but by denial, by suffering. Faithfulness in Christian marriages entails that: great mortification.”

An Exercise of the Will

This seems to be the point Tolkien wants his son to understand: “No man, however truly he loved his betrothed and bride as a young man, has lived faithful to her as a wife in mind and body without deliberate conscious exercise of the will, without self-denial.”

Tolkien speaks about sexual temptations. Maybe that’s what you talk about when you write a young man about to risk his life. What he says about great mortification and the deliberate conscious exercise of the will applies to the rest of married life just as much. Especially as men get older and less energetic.

In fact, a man may find being faithful much easier than being helpful or sympathetic or self-denying. I suspect Tolkien would have found it easier to say no to a proposition from a young woman than to say no to Jack Lewis asking him out to the pub to discuss medieval literature or listen to each other’s books. But being away when you should be home is a kind of infidelity. It gives to another something that belongs first to your wife.

“Nearly all marriages, even happy ones, are mistakes,” Tolkien insists in the letter. Both the husband and the wife could have done better. “But the ‘real soul-mate’ is the one you are actually married to. In this fallen world, we have as our only guides, prudence, wisdom (rare in youth, too late in age), a clean heart, and fidelity of will.”

A few years after Tolkien retired, he and Edith moved to a small home in a very middle-class seaside village they had visited on vacations. He had not wanted to go, but felt he owed it to her after all her years sacrificing for him. It wasn’t his world at all. Polite lunches at the hotel and small talk with people who knew nothing of what he knew and loved, while listening to muzak. He wrote Christopher: “I feel quite well. And yet; and yet. I see no men of my own kind.” He missed them, and his old life, very much.

But Edith was happy, his biography Humphrey Carpenter writes. “And consistently happier than she had ever been before in their married life. … She ceased to be the shy, uncertain, sometimes troubled wife of an Oxford professor, and became herself once more, the sociable good-humoured Miss Bratt” of her youth. “She was back in the setting where she really belonged.”

“And on the whole,” Carpenter writes, “life was better for Tolkien himself. Edith’s happiness was deeply gratifying to him, and was reflected in his own state of mind, so that the diary he kept … shows very little of the despondency which often overtook him” in Oxford.

Tolkien found happiness, but it was not easy, and it took a long time. He found it through faithfulness, faithfulness to his real soul-mate.

I’ve quoted about an eighth of the letter. To read it all, call up the book on Amazon’s “look inside” feature and search for the words “the subject of marriage.” That will take you straight to the letter. Catholics in particular will want to read the very end, which puts the rest in its spiritual context.

David Mills is a senior editor of The Stream. After teaching writing in a seminary, he has been editor of Touchstoneand the executive editor of First Things. He edits the site Hour of Our Death and writes the monthly“Last Things” columnfor the New Oxford Review and a weekly column for the English Catholic Herald. He is finishing a book on death and dying to be published by Sophia Institute Press.

I Felt Naked Without It