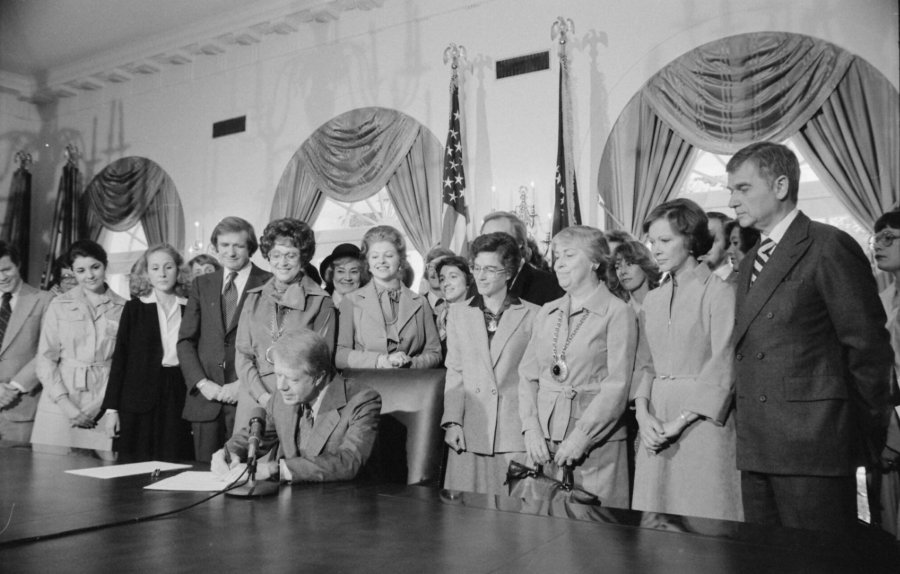 ERA advocates can hold their press conferences, dance their victory dances and tie up the courts in frivolous lawsuits, but the ERA is dead. Pictured: President Jimmy Carter signed an extension of the ratification of the Equal Rights Amendment (ERA), October 20, 1978.

“I am prepared to do everything I can to make sure the will of Virginians is carried out and women’s equality is enshrined in the Constitution.”
— Virginia Attorney General Mark Herring, upon the Virginia General Assembly’s passage of a resolution purporting to ratify the Equal Rights Amendment, January 15, 2020.

Politics today is not much different than entertainment. So much of what happens at all levels of government is about pleasing special interest groups, making constituencies feel good, or making rivals look bad. Sometimes, as with a resolution commending a winning sports team, this is harmless. But other times, the “show” costs dearly in terms of time, money and civic understanding.

The ERA has cost valuable time in the state legislatures that purport to have “ratified” it in recent years.

The current hubbub about the Equal Rights Amendment is a good example of political grandstanding that exacts a high price on our Republic. It has cost valuable time in the state legislatures that purport to have “ratified” it in recent years. It will cost precious funds in pointless lawsuits. But perhaps the greatest cost of all is what it detracts from people’s understanding of a valuable constitutional process.

Article V of the U.S. Constitution is one of our founding document’s lesser-known provisions — and one of its most important. It outlines the process for amending the Constitution.

Article V prescribes two ways in which amendments can be proposed. Congress can propose them when two-thirds of the House and the Senate agree. Amendments may also be proposed at a convention upon application of two-thirds of the states. Regardless of which body proposes an amendment, it must be ratified by three-fourths of the states (38) before it can be added to the Constitution.

Unfortunately, much confusion surrounds the second option for proposing amendments. The “convention of the states” process was familiar to the founders, but has fallen out of use in modern times. This lack of modern experience, combined with the lack of procedural detail in the text of Article V, has led a number of otherwise smart people to conclude that we have no idea how a convention for proposing amendments would operate.

That suggestion is nonsense. We know all the important aspects of convention process from the wealth of historical precedents and founding-era writings.

When it comes to the more familiar process of Congress proposing amendments, citizens who might like to understand are now stymied by activists who refuse to concede points of law that are well-established.

Those well-established principles include the following (among many others):

Each of these points has been decided by the courts. Each is relevant to the current effort to add an “Equal Rights Amendment” to the U.S. Constitution.

The Life and Death of the Equal Rights Amendment

Congress proposed the ERA in 1972. It set a 7-year deadline for the necessary 38 states to ratify it. When Congress saw that the deadline would not be met, it tried to extend the deadline to 1982. A federal court ruled that this was illegal — that Congress is not permitted to change the ratification process once it has begun.

No court has ever ruled otherwise. Simply put, there is no serious grounds for suggesting that the beleaguered ERA is anything but dead as a doornail.

Even supposing that the states or Congress could ignore the original deadline, the ERA would still not be ratified.

But wait! There’s more! Even supposing that the states or Congress could ignore the original deadline, the ERA would still not be ratified. Why? Because a handful of states that initially ratified it later rescinded their ratifications.

ERA advocates can hold their press conferences, dance their victory dances and tie up the courts in frivolous lawsuits, but the ERA is dead. I, for one, am not sorry. The proposal is both unnecessary and poorly-drafted.

While politicians and special interests continue to beat their long-dead horse, I can only hope that their efforts will result in a new conversation about Article V. Let’s talk about amendments that we really do need in America today, and how we might actually obtain them.

Liberty and Virtue: Where Does Disobedience Fit In?