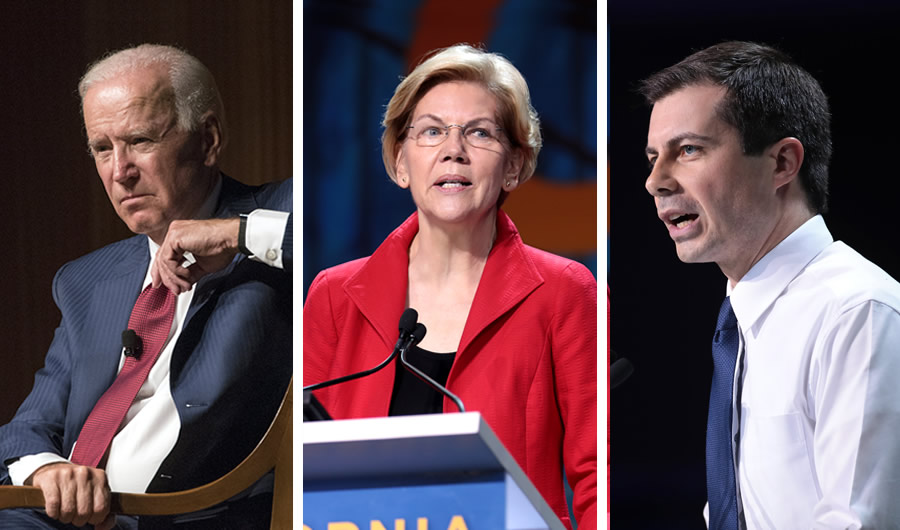 “Are You Ready to Grumble?!” The 2020 debate season kicks off tonight with a two-night extravaganza in Miami. Two nights, 20 Democratic candidates. Countless expressions of how awful things are in America. Endless promises to give away someone else’s money. There will be so many giveaways, you won’t be able to tell if they’re running to be president or running to be Oprah.

Twenty Democrats made the cut. This isn’t a primary. It’s an open casting call. Trump is the Harlem Globetrotters and they’re auditioning to be the Washington Generals.

Actually, there were qualifications: To get on the debate stage a candidate had to collect 65,000 donors, spread across 20 states. Or they had to get at least 1% support across three national or early-state polls. Plus be willing to declare Trump supporters the spawn of Satan and offer human sacrifices at the altar of abortion.

Obviously the qualifications couldn’t be that hard. Heck, Eric Swalwell made it to prime time.

So many candidates jumped into the race, the Democrats had to split them into two groups. To avoid the impression the GOP gave in 2016 of having varsity and JV candidates, the party mixed and matched. Each night will feature the front runners, the marginals and the “Is That Really a Candidate or Just Part of the Stage Crew?”

So you’ve got the Red Team Wednesday night and thanks to Sanders, the Better Red Than Dead Team Thursday.

To help you tell the players apart, NPR has a handy-dandy scorecard right here, mugshots included. The players obviously provided the brief blurb. For example, Kamala Harris wants to “advocate for the voiceless and vulnerable.” This from the woman who prosecuted David Daleidin for exposing Planned Parenthood’s baby part selling scheme.

What can we expect? First, here’s what not to expect: A ratings bonanza. While some predict ratings will be “robust,” at least compared to years before 2016, others are already conceding the ratings won’t approach the 2016 Trump Show. That has to worry Democrats. If you aren’t filled to the rafters Opening Day, what do you think will happen later in the season?

Also, from what we’ve seen so far, the Democrats have few interesting, entertaining, charismatic characters. Sure, the Republicans had Trump in 2016. But they also had the genuinely entertaining Chris Christie, Mike Huckabee and Lindsay Graham. Ted Cruz and Carly Fiorina were good for epic zingers, and Rick Perry, deliberately or not, always offered a laugh or two.

The Democrats? Look at the Wednesday line-up. Unless Beto skateboards in while wearing a devils’ goat costume, how interesting can it get? Cory Booker’s crying and shouts of “Spartacus” are already old and nobody wants to see Sen. Klobuchar eating salad with a comb. Still, if President Trump starts live tweeting the debate, NBC could have its first “Must See TV” in years.

Thursday has more promise, if only because that’s where front-runner Joe Biden is, along with Larry David — I mean, Bernie Sanders — and last month’s flavor of the month Mayor Pete Buttigieg. Biden will have a target on his back, especially after his shocking revelation that he could be civil with people he disagrees with. In the current Democratic climate that’s blasphemy … a far worse sin than Joe’s hair-sniffing, shoulder snuggling adventures.

Expect Mayor Pete to be smacked for his less-than-stellar performance in the wake of a police shooting in South Bend. Someone lower in the polls is going to ask: If you’re getting heckled and hammered in your own home town, how you going to handle New York or The Swamp or Tehran? If he were hotter in the polls they’d be calling him the gay George Wallace.

What I want: “So, Vice President Biden, when did you and Barack Obama know that the FBI and CIA were using fake information from a foreign agent paid by Hillary Clinton to launch a massive surveillance effort on your political opponent?

What I expect: “Is Barack Obama really as nice and cool as he seems?”

What I want: “Mayor DeBlasio, under your watch, the Big Apple is turning back into a rotten cesspool of trash and despair. Why on earth should Americans be stupid enough to let you ruin their cities too? And Sen. Booker. First it was Jeff Sessions. Now it’s Joe Biden. Two men you served with and have honored. Yet both you have now implied are racists. Is your thirst for power so great you would slander good men you personally know and help further widen racial tensions?”

What I expect: “Mayor DeBlasio. Sen. Booker. New York pizza. Jersey pizza. Which is better. You each have two minutes.”

What I want: “Cory Booker, if you were so easily fooled by a second-rate actor like Jussie Smollett, how easily will you be fooled by first-rate international operators? Oh, and when can Trump supporters expect your apology for selling Smollett’s lynching hoax on Twitter?”

What I expect: “Cory Booker, what razor do you use to make that scalp so smooth?”

What I want: “Sen. Gillibrand, would you care to explain you and your family’s history with the NXIVM sex cult?”

What I expect: Silence.

What I want: “This is for Julian Castro and Beto O’Roarke and any other elected Democrat who wants to chime in. We know El Chapo paid millions and millions of dollars to Mexican politicians to grease the skids for getting drugs into the U.S. As you demand open borders and fight attempts to secure our borders, I have to ask: What’s the point of El Chapo paying off politicians on one side of the border if he didn’t also have politicians on this side of the border in his pocket?

What I expect: “Group question. Just how horrible is it that Donald Trump is killing kids at the border?”

What I want: “A pregnant woman is gunned down. Is it two murders or one?”

What I want: “You’ve got AOC on line one. Nancy Pelosi on line two. Which line do you pick up?”

What I expect: “Isn’t AOC just the greatest?!”

The 2020 Debate Season begins at 9 Eastern. And will never, ever end.