A fascinating dig into the parallels between Pachamama and the Biblical figure of Asherah. 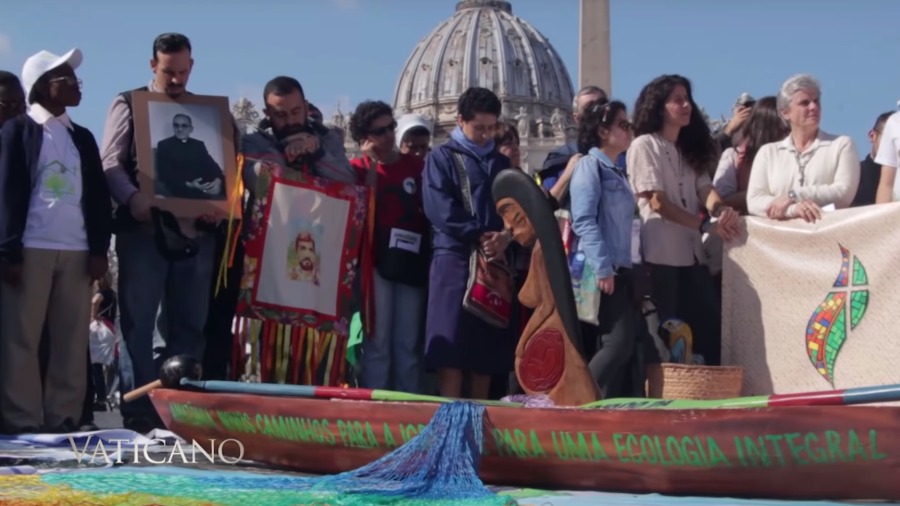 The Amazon synod has made one thing perfectly clear. That — from the month-long Vatican meetings, ostensibly to discuss the needs of Amazonian Catholics — a star was born: that scantily clad diva Pachamama.

She’s been front-page news ever since her debut at the opening of the synod. And now, more than two weeks since the conclusion of the Rome meeting, she’s still commanding headlines. So who is she, you ask? Actually, she’s more of a what than a who. “Pachamama” is the name of a South American fertility goddess, which, at the opening of the synod, was placed at the center of a prayer circle where participants bowed down and worshipped her.

Led by a female witch doctor, Pope Francis participated in an idolatrous pagan ceremony at the Vatican 2 days ago. Among the deities worshiped, the fertility goddess Pachamama ("Mother Earth") was the center, all in the form of naked wooden figurines.https://t.co/aFLYkn4xPU pic.twitter.com/FwU9QsdGXK

The pope attended the service, and later, the idol was processed into St. Peter’s Basilica. Pictures circulated across the internet showing these same idolatrous rituals taking place at various Catholic churches in Rome. Jesus was nowhere in sight. Neither was the Bible.

The ceremonies had their Catholic defenders, however, claiming that all of this was somehow compatible with our religion and not a flagrant violation of the First Commandment. Some claimed that in fact Pachamama represented the Virgin Mary, as if this would make it all okay. But, in fact, it is never the case that Catholics bow down to statues of the Virgin Mary.

Thus, it would seem that a fair-minded person would agree that a little bit of research into the identity of this Pachamama would be in order. This is especially true, given that one of the synod leaders is reported to have recommended that Pachamama be incorporated into the regular liturgy. So, after doing a little archeology, this is what I found.

I found this account of Pachamama and her husband on a travel website. It describes the opening of an Argentine pre-lenten carnival, a period of celebration and feasting prior to the beginning of the penitential season of lent. You know — Mardi Gras — only in Latin America, it ain’t just Tuesday, folks.

But the first thing to do in order to start celebrating is to disinter the devil of carnival, a small dummy (pucllay) imitating the devil and symbolizing the sun, which for the locals represents the force in charge of fertilizing the soil (Pachamama). Popular rites and beliefs, but also individual philosophies of life, anything goes for the sake of fun. Religious faith mingles with popular beliefs and the eccentric celebrations everybody was waiting for begin in the center of town and its outskirts.

I was able to confirm this account in a poorly written master’s thesis from the University of Chicago. According to the thesis, Pachamama represents a synthesis of Christian demonology and traditional Andean mythology (pp. 42–45). But synthesis is hardly the word. “Cognitive dissonance” is more like it. Or “conceptual nuclear holocaust.” For those who stand by the “Pachamama is really the Virgin Mary” alibi, consider that her husband is a red-horned devil. His name is Supay, and he is the god of the underworld. But he also represents the devil of Christianity. An occult website informs us that Supay is represented with an “erect phallus.” You will recall that the Pachamama statues in Rome depicted a naked, pregnant woman with a red spiral in her stomach. What does the spiral indicate? A serpent, apparently. So, to sum up, Pachamama is pregnant with the offspring of a demon.

Based on this research, I concur with Fr. Longenecker that it is very difficult to reconcile the mythology of Pachamama with the Blessed Virgin Mary. Nevertheless, Pachamama does indeed bear a remarkable resemblance to an extraordinary biblical character.

During the rule of King Ahab of Israel and his wife, Jezebel, the Jews suffered under a forced apostasy. Jezebel ordered the priests and prophets of Yahweh to be slain. And the couple established a national worship of Baal and Asherah. Like Pachamama, Asherah too is a fertility goddess. But the similarities don’t end there:

[Asherah] is portrayed as a nude female, sometimes pregnant, with exaggerated breasts that she holds out, apparently as symbols of the fertility she promises her followers. The Bible indicates that she was worshiped near trees and poles, called Asherah poles. https://www.thattheworldmayknow.com/fertility-cults-of-canaan

Actually the number of similarities between Pachamama and Asherah are extraordinary:

And let us not overlook these horned husbands, please.

Really, in the ancient power couple that is Baasherah, the female plays the supporting role beside her rock-star husband, Baal. This should be obvious to anyone familiar with the Bible. He got all the A-list gigs:

And now his pregnant girlfriend shows up at the doorstep of St. Peter’s Basilica, where she is about to give birth to his child. And what does the pope do? He throws her a baby shower.

Thus, what happened at the Vatican a couple of weeks ago was old-fashioned pagan idolatry, plain and simple. That it happened in St. Peter’s Basilica in Rome — the very church where the prince of the Apostles is buried — makes this no ordinary act of idolatry. As many have observed, this looks just like the desolating abomination described by Jesus in Mk. 13: 14–20 (RSV):

But when you see the desolating sacrilege set up where it ought not to be (let the reader understand), then let those who are in Judea flee to the mountains; let him who is on the housetop not go down, nor enter his house, to take anything away; and let him who is in the field not turn back to take his mantle. And alas for those who are with child and for those who give suck in those days! Pray that it may not happen in winter. For in those days there will be such tribulation as has not been from the beginning of the creation which God created until now, and never will be. And if the Lord had not shortened the days, no human being would be saved; but for the sake of the elect, whom he chose, he shortened the days.

So here’s the score. If Pachamama is the desolating abomination that Jesus described, then that is the very worst news imaginable. For it means that the Great Tribulation is upon us. And my research supports this conclusion. For Pachamama and her entourage are not just any old pagan idols. Rather, they are the very same idols and demons that have provoked God’s vengeful wrath since Moses. Nay, since before time began.

And if the Great Tribulation is upon us, it means we will experience the greatest divine chastisement the world has ever seen. A punishment greater than anything described in the Bible. In fact, it may have already arrived.

Has the Apocalypse Arrived?

In some Bible passages, as in 1 Thess. 5 and Mal. 4, the Great Tribulation is referred to as “the day of Lord”. In fact, all of Malachi 4 describes this day, or period of divine judgment, in rather pyrotechnical terms:

For behold, the day comes, burning like an oven, when all the arrogant and all evildoers will be stubble; the day that comes shall burn them up, says the LORD of hosts, so that it will leave them neither root nor branch. But for you who fear my name the sun of righteousness shall rise, with healing in its wings (Mal. 4:1–2, RSV).

This seems to be an important detail, given that, in the weeks leading up to the Amazon synod, the Amazon Rainforest was ravaged by the most devastating fires to hit the area in a decade. This happened in August, the month dedicated to which Latin American sex goddess? Pachamama. The pope was clearly impressed, for he preached about the fires during the synod. Did he acknowledge that the fires might be a sign of punishment from God for the sin of idolatry?

Not exactly: “God’s fire burns but does not consume. It is the fire of love that illumines, warms and gives life, not a fire that blazes up and devours.”

And since the synod? A deluge of “unprecedented” fires has rained down on California and Australia.

The sky was lit bright red as firefighters continued to battle the flames of the massive #KincadeFire, which has spread to over 76,000 acres due in part to heavy gusts of wind. https://t.co/r21sS0tkDr pic.twitter.com/lrybQiro7s

Catastrophic fire danger in Australia: what does it mean and what should we do in these conditions? #bushfires #climatechange #climateemergency https://t.co/DSrOfnsRky

Australia is bracing for cataclysmic wildfires as strong winds, high temperatures and parched forests create some of the worst fire conditions the country has ever seen. https://t.co/ZRdSAefSAT

What Do You Believe?

If Pachamama really is the sign that announces the opening of the Apocalypse, then we have just witnessed the greatest, most important event in human history since the birth of Christ. But unlike the birth of Christ, this event is terrifying. What is there for a Christian to do? Are we really living in the end times, or is this just another false alarm? I think the real question is this. Given all the signs, would it be prudent to go on, business as usual? Or should we, instead, heed the example of Nineveh and repent of our sins?

I’d say, the writing’s on the wall.

John Gravino is the author of The Immoral Landscape of the New Atheism, which was the topic of a health and spirituality seminar at Duke Medical School. His new book, Confronting the Pope of Suspicion, is available on Amazon. He continues to explore the intersection of health and religion and the other big questions of life at his website, NewWalden.org.