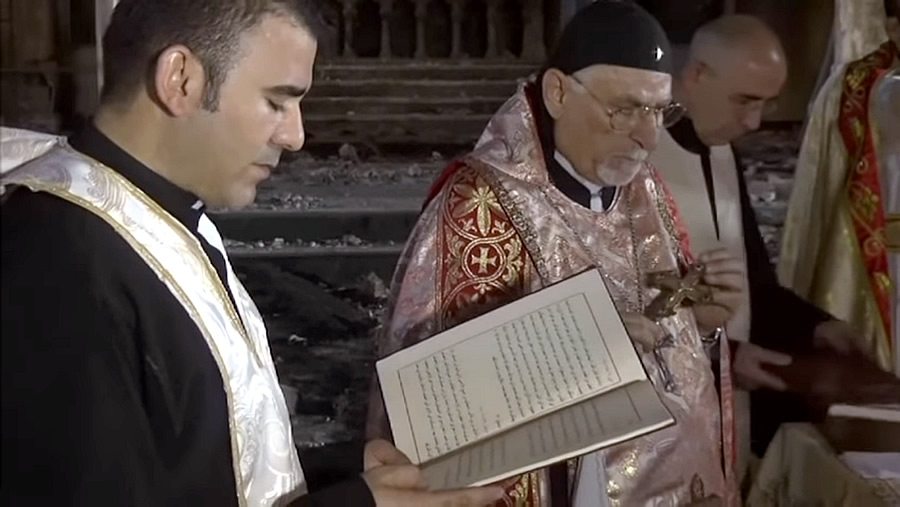 In this screengrab from video, Archbishop Butrus Moche listens during part of the first Mass celebration in over two years at the Syriac Christian church in Qaraqosh.

An ancient, bombed-out Christian church just outside of Mosul, Iraq, held its first Sunday service in more than two years this past weekend.

Iraqi Christians celebrate Mass in Qaraqosh for the first time since liberation from ISIS: https://t.co/RV3z9Kv7h0 pic.twitter.com/dwqRE476NJ

The congregation was comprised of the Syriac community’s ragged remains in Qaraqosh and some of the Iraqi Security Forces (ISF) fighters who helped retake the city.

The first Sunday mass has been held at this Iraqi church near Mosul, two years after it was captured by ISIS. pic.twitter.com/eUgVFndAmx

Iraq’s Syriac Catholic sect is one of many religious minorities persecuted by ISIS. The terrorist group also targeted Yazidis, Chaldean Christians, Assyrian Christians and Shiite Muslims during its rise from 2013 to 2014. ISIS forced the Syriac sect to pay a religious tax (known as a jaziyah), submit to Islam or face death. Much of the Syriac population fled to Iraqi Kurdistan as a result of the ISIS oppression.

ISIS took hundreds of Christian prisoners during its land-grab campaigns in Iraq and Syria, often holding them as hostages. The terrorist group forced Assyrian Church to pay millions of dollars in exchange for 230 hostages held for months on end. Members of the church were able to scrabble together enough money to release the final 42 hostages in February

“Our role today is to remove all the remnants of Daesh,” said Moshe, a native of Qaraqosh. “This includes erasing sedition, separation and conflicts, which victimized us.”

Syriac Catholicism is one of the oldest Christian traditions, with roots in Iraq dating back to the first century. The number of Iraqi Christians dropped significantly after facing persecution from Muslims after the U.S. invasion in 2003.

After Defeat of ISIS, Iraq’s Christians and Yazidis Adjust to Uneasy Peace