Joe Biden believes in One Thing, the Whatzit Almighty, Thingamajig of heaven and earth...

The Flying Spaghetti Monster, venerated by snarky atheists in their parents' basements.

It’s tempting to write off resurrected Democratic front-runner Joe Biden’s latest howler as just another blooper. One of those Tucker Carlson helpfully compiled in his latest gallows humor montage. (See the bottom of this story.) As you watch it, remember that this isn’t just some guy auditioning to drive your kids on their school bus. He’s asking us for the launch codes that would let him, all on his own, launch a world-ending nuclear war.

I won’t mock Biden’s scrambled statements here at The Stream. I’ll leave that to Carlson and to President Trump. I hope they treat Sen. Biden with all the charity and respect that media accorded President Ronald Reagan, Vice President Dan Quayle, and Governor Sarah Palin.

But various commentators on Twitter suggested that there’s something deeper going on. At least with the most egregious of Biden’s latest “moments.” That is, the one where he couldn’t bring himself to finish the key quote from our country’s founding document, the Declaration of Independence. For those of you who went to school in California or Wisconsin, it goes like this:

Instead, Biden said to a crowd of supporters:

We hold these truths to be self-evident. All men and women are created, by the, you know, you know the thing.

Now it’s possible Biden’s so addled that he couldn’t remember the most famous phrase in American history. The motto that sums up the creed that animated our Founders. That Jeffersonian pearl neatly summed up the common ground shared between the huge majority of Americans (and of signers of the Declaration), who were orthodox Protestants, and the tiny sect of quasi-Deist classical Liberals. Maybe Joe has forgotten all that. He has had a lot on his mind, what with trying to accommodate every leftward lurch of the Democrats, while playing a “moderate” on TV.

Maybe Biden meant by “the thing” the text of the Declaration. As we might shout “You know the thing!” at some Karaoke singer screwing up the lyrics to “Sweet Home Alabama.”

Thingamajig of Heaven and Earth

But I found another theory among wise commentors on Twitter. One that gives Mr. Biden a little more credit for being compos mentis. What if Biden remembered, once he’d launched into that famous phrase, that it mentioned the Creator? And that sent the gears and pulleys, racing gerbils and tethered crows, of his Rube Goldberg intellect slamming into reverse. “Can’t mention the Creator — that will offend too many atheists. And they’re the core group in our party!”

Biden couldn’t explain to you why racism is wrong. He has literally no idea, apart from some ragged tatters of his Catholic education, stuffed deep in his lint-filled pockets, down with all those Junior Mints.

So instead Biden trailed off incoherently, and cited “The Thing” as the source of our rights. I don’t think he meant the Addams Family character. (Though with Sleepy Joe, you can never be sure.) 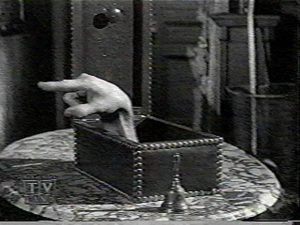 Instead, Biden invoked a much more important concept. The nebulous, undefined, in fact undefinable Thing that’s the source of human dignity, our desire for justice, and the reason we seek to grant all people equal protection under law. It can’t be the God of the Bible, who demands too much from us. Instead it’s a kind of materialist-spiritual, square-circle, self-contradictory … Thing. The kind of Thing that doesn’t and can’t exist.

Why Is Racism Wrong?

Ask Darwinists — who believe that all life, and our life, and our intellects, are the waste product of random mutation and ruthless natural selection — a few simple questions. You’ll quickly encounter The Thing. It’s their answer to every question. So I wrote, in an essay (Brew a cup of coffee and read it!) aimed at college teachers. They should demand of their “Woke” students answers to each of the following:

Whatever answers they manage, teachers should “critique [each] response by referring strictly to Darwinian materialism. Any argument that can’t withstand that corrosive acid, toss in the trash.”

Everything Is Just … Stuff That Happens

Biden couldn’t explain to you why racism is wrong. He has literally no idea, apart from some ragged tatters of his Catholic education, stuffed deep in his lint-filled pockets, down with all those Junior Mints, which he pulls out when shvitzing with bishops. (The tatters, not the mints.)

The kind of world where abortion and infanticide are okay because everything happened by accident, so we might as well enjoy ourselves with lots of recreational sex …? That’s not the kind of world with “inalienable” rights. Or a common human nature, with dignity we must respect whatever someone’s skin color.

But it’s the kind of world that exists in Joe Biden’s head, and has for decades. It’s Joe’s lucid moments that really ought to scare us.