In Sex Scandal, Pres. Trump Should Treat Vatican Like Any Other Foreign Government 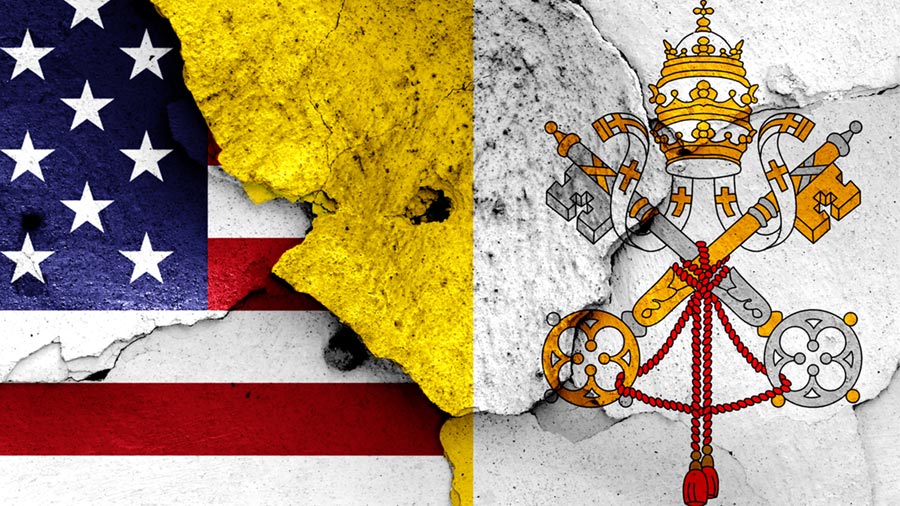 President Trump thinks Pope Francis is handling the priest sex abuse crisis “as well as he could,” according to WMAL radio personality Vince Colonese, who interviewed the President in the Oval Office yesterday.

Speaking this morning on his WMAL radio program, Colonese reports that Trump also said everyone “knew” former Cardinal Theodore McCarrick. Colonese says the president “looked sad” as he talked about the crisis in the Church, particularly since he has had a longtime relationship with the Church.

It’s possible the president does not know what the Vatican is really doing to handle the crisis. Someone should tell Trump that Pope Francis and his men have been content to remain silent and allow media cutouts to slander the accuser, Archbishop Carlo Maria Viganò, who released his j’accuse two weeks ago.

Consider that high-ranking officials of a foreign government have covered up the criminal sexual assault of American men and boys. This is how this crisis should be viewed by the U.S. government.

In his now infamous letter, Viganò charges that some of the pope’s closest advisers, indeed Pope Francis himself, knew that the disgraced McCarrick was a serial assaulter of young men and boys. Viganò charges that the pope ignored sanctions levied on McCarrick by his predecessor Pope Emeritus Benedict XVI. Worse, Pope Francis elevated McCarrick to one of his closest advisers. He was also allowed to live close to seminarians, the pool of young flesh he craved.

Catholics are Fed Up

President Trump should understand that Catholics are fed up and would not object to federal intervention into this crisis. Consider that high-ranking officials of a foreign government have covered up the criminal sexual assault of American men and boys. This is how this crisis should be viewed by the U.S. government.

The U.S. government should request that the Vatican release all documents related to McCarrick’s sexual assaults. There are files in the Vatican embassy in Washington DC and in various offices in Rome. Again, the President should act as if that criminal behavior against Americans was covered up by officials of a foreign government.

Others suggest we would not want a future Hillary Clinton-type traipsing through the files of the Catholic Church. Hillary Clinton-types are not our friends, to be sure, and they may be licking their chops to go after the Church. This is a serious objection. However, we have already seen local governmental intrusion into the non-religious behavior of Catholic churchmen. We have seen Catholic priests go to jail over sexual assault. We have seen a Grand Jury investigation into priest pederasty in Pennsylvania. This would be no different, even though it may come from the federal government.

What the U.S. Can Do

Any approach by the U.S. government would have to be appropriate and only with a proper level of escalating requests. The first request should come from the U.S. Department of State in the person of U.S. Ambassador Callista Gingrich. At some point, a U.S. Attorney might get involved. At a later point, the president may recall our ambassador altogether.

None of this would be necessary if the Vatican would just do the right thing and act in a responsible way to the Viganò accusations. Rather than stone-wall, release the documents. If Viganò is a liar, prove it! But, as we have seen in the past, bishops seems incapable of handling this crisis responsibly.

Bishops have seemed content to drain Church resources to pay off victims, hide the charges from the laity, and move priests around who are victimizers. Bishops say after the crisis of 2002 they no longer move victimizers around, but that is precisely what was done with Theodore McCarrick. And this seems to have happened with the direct involvement of Vatican officials.

A few weeks ago, Josh Hawley became the first Attorney General in the country to announce a state-wide investigation into priest pederasty.

He did so in Missouri, a state with 735,000 Catholics, while he is in a heated political battle for the U.S. Senate with dissident Catholic Democrat Clare McCaskill. This speaks volumes about where Hawley thinks Catholic voters are on this issue.

A Lesson for President Trump

President Trump should be watching. This should be a lesson for him as the Vatican continues to stonewall the release of documents about how high-ranking Vatican officials may have shielded an American Cardinal who sexually assaulted American seminarians.

The President should know that Pope Francis is not handling this crisis as well as he could.

*This piece has been updated since original publication to correct what the president said concerning McCarrick.

As Attorneys General Close In, Pope Francis Puts Hope in the Honor System for Sex Abusers

Molester McCarrick Lives in Comfort Near a Grammar School. Here’s Why He’s Untouchable.

How Donald Trump Could Help the Catholic Church