Working against a deadline, the Senate will pursue immigration solutions next week. A coalition of Christian leaders advocate reform, while others are skeptical. 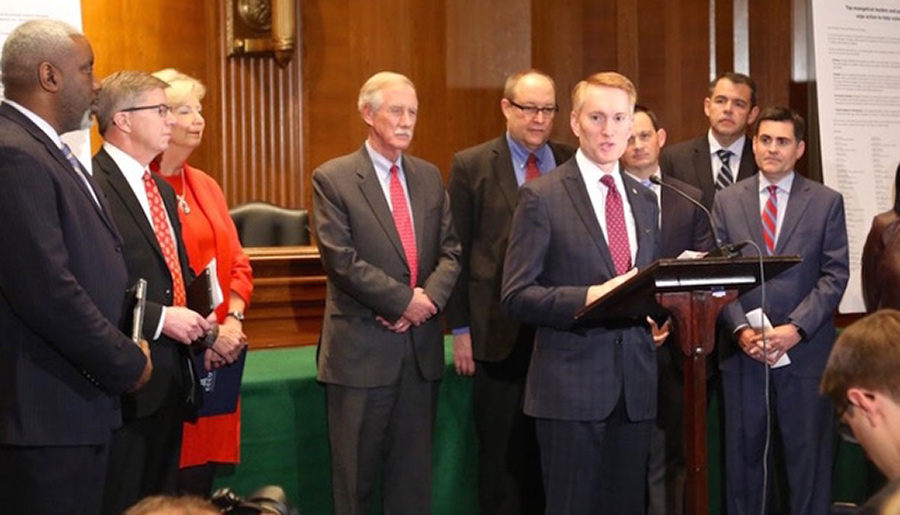 On Wednesday, a bipartisan group of U.S. Senators and Christian leaders came together to urge Congress to act on behalf of refugees and young immigrants. Faith-based aid group World Relief convened the press conference on Capitol Hill.

Senators James Lankford (R-OK) and Angus King (I-ME) headlined the event. “I’ve been in Congress for seven years,” said Lankford. “During that entire time period, there’s been a dialogue about immigration. It’s obvious to everyone there is an issue and a need. [Yet] Congress has been unwilling to address it.”

This public effort comes only weeks before more than 700,000 young immigrants may face deportation. The Deferred Action for Childhood Arrivals (DACA) program expires on March 5. Next week, the U.S. Senate plans to hold a series of votes on immigration proposals.

“These young people came here by no fault of their own,” said Senator King, referring to DACA recipients. “These young people didn’t break the law. They’re here. We should deal with them in a humane, faith-based way. That’s why I’m so glad this group is here today.”

President Trump held a bipartisan meeting at the White House on January 9. “It should be a bill of love,” he said on immigration reform. “But it also has to be a bill where we’re able to secure our border.”

He outlined his solution for these issues in four pillars. These include improving border security, securing the status of DACA recipients, restricting family-based immigration and ending the visa lottery system. On January 30, President Trump again emphasized these four pillars in his State of the Union address.

In tandem with Wednesday’s press conference, World Relief ran a full-page ad in The Washington Post on Wednesday. The letter to national leaders calls for the U.S. to care for immigrants and refugees, without endorsing a specific proposal. “The Bible speaks clearly and repeatedly to God’s love and concern for the vulnerable,” it states.

“President Obama ‘welcomed’ millions of foreign persons at a time when 90 million Americans were out of work. … Now we need wise policies.” — author Kelly Kullberg

Other Christian leaders are skeptical. The co-author of Finding God at Harvard, Kelly Kullberg serves with the American Association of Evangelicals. “A President is to represent Americans, not the world,” she says. “God loves all people. God wants the gospel to enliven every nation, not for all people to live in America.”

Pointing to the previous administration, Kullberg sees an ominous agenda at work. “President Obama ‘welcomed’ millions of foreign persons at a time when 90 million Americans were out of work,” she states. “Thankfully, President Trump and Congress are bringing jobs back to America.”

As the faith leaders spoke, Senate leaders on the other side of Capitol Hill announced a deal. Majority Leader Mitch McConnell (R-KY) and Chuck Schumer (D-NY) touted a two-year agreement on government spending.

Fiscal conservatives have balked at the proposed spending increases. Others contend this bill fully funds the military, which has faced cuts in recent years. The spending bill narrowly passed the House and Senate early Friday morning. As part of the spending deal, McConnell agreed to an open process on immigration reform.

“The U.S. Senate may actually be the U.S. Senate next week,” said Senator King at the press conference. “[McConnell] has said that he is going to bring forward a bare-bones bill. Then there will be an amendment process.”

Significant factions of both parties must support any provision for it to end up in the final bill, he explained. “What we’re going to end up with is amendments that can get 60 votes,” said King. “That’s the process we’re embarking upon in a few days.”

“At least we can take steps on the issue of ‘dreamers’ and border security. This is an important trust-building so we can break through some of the partisan divide.” — Sen. Angus King

“We Need To Finish the Work”

Lankford expressed his commitment to the bipartisan effort. “This is a unique moment that we’re in [because] there’s a deadline,” he said. The March 5 expiration of DACA looms over the debate. “The Senate, by nature, always goes toward what’s easiest,” Lankford continued. “If we just punt this for a year and come back, we’ll do that 20 more times. I’d like to see us avoid that the first time.”

The two Senators are often at odds on other issues. King, an independent, typically aligns with the Democratic Party. Meanwhile, the Oklahoma Senator is known as a bold conservative voice.

“James and I have spent more time together in the last three weeks than we probably wanted to,” said King. “There is a sizable group of [Senators] who are, in good faith, very assiduously trying to find a solution. At least we can take steps on the issue of ‘dreamers’ and border security. This is an important trust-building so we can break through some of the partisan divide.”

Lankford agrees, saying: “We need to finish the work that was started.”

“One of the verses we all hear on baptism Sundays is from Matthew 19,” said King. He quoted verse 14: Jesus said, “Suffer little children, and forbid them not, to come unto me. For of such is the kingdom of heaven.” King continued, “That speaks to this moment.”

Kelly Kullberg counters there are other ways to view the text. “For human flourishing, I try to consider the whole counsel of Scripture,” she says.

“Our Christian faith compels us to seek justice, to love kindness and welcome the stranger.” — CCCU President Shirley Hoogstra

“We see in the Bible the embrace of Ruth and Rahab, who come as converts and blessings,” she continues. “We also see foreigners who are dangers. Nehemiah led a nation in the rebuilding of its faith, walls and culture. Let’s not cherry-pick verses for political ends, but consider God’s wisdom for honoring and shaping a nation.”

Other leaders at the press conference spoke from their experience. Shirley Hoogstra leads the Council for Christian Colleges & Universities. The association represents more than 140 educational institutions nationally attended by 400,000+ students.

“Our Christian faith compels us to seek justice, to love kindness and welcome the stranger,” she said. “We have thousands of ‘dreamers’ on our campuses. While living with terrible uncertainty, they continue to study [and] serve their campuses and communities. They value being in America. They do not take it for granted.”

Hoogstra is hopeful about the current reform efforts. “We are asking Congress to do what Senators King and Lankford said, to be the Senate we are proud of,” she said. “Our faith and values must shape our politics, rather than vice versa.”

Senators on both sides of the aisle recognize the complexity of the issues at hand. “This is a hard issue,” said King. “We’re trying to contain this [to] address the specific issue that is before us today.”

Lankford, who previously worked for 22 years in Christian ministry, sees the impact on real people. “For these families who are waiting for this moment, they need to know [the] direction we are going to go in law,” said Lankford. “That’s part of the responsibility of government. We also understand the humanity. Each individual is created in the image of God.”

“There’s going to be a lot of heat and conversation over the next couple weeks to try to bring a legislative solution,” he adds.