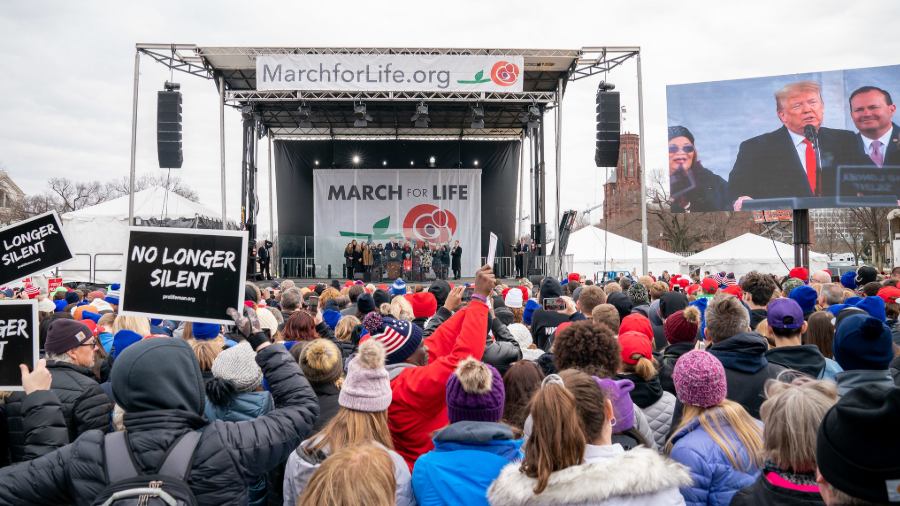 President Donald Trump became the first sitting president to speak live at a March for Life rally on Feb. 24, 2020.

I was part of this year’s historic March for Life in Washington, D.C. It was my first time at the March, and I was blown away by what I saw, heard and experienced. Let me share some truth with you. You won’t hear this from (corrupt, spineless hacks of the) mainstream media.

1. The Crowd was Absolutely Massive.

Please understand me now, I mean, massive. I’m searching for another adjective to describe it and I can’t find an adequate one. 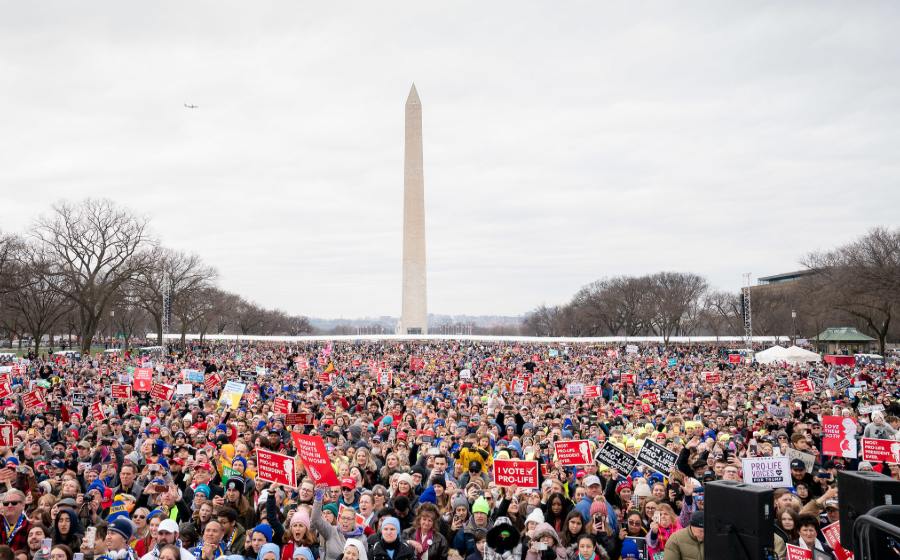 Estimates of the crowd size vary from tens of thousands to 100,000, according to heavy.com.

2. That Crowd was Overwhelmingly Young.

I’ve never seen so many teenagers in one place before. High school students, college students, middle and elementary school kids, too. Young adults as well. If you’re under the impression that the March for Life attracts mostly middle-aged or senior citizens, get yourself a different impression. You’re mistaken.

3. Let Me Tell You About the Teenagers.

A few important notes about all those young people: those teens were incredible.There was not a sullen, typical-teenage attitude to be found anywhere. Those kids were enthusiastic, smiling, happy, friendly, courteous, helpful, kind and just plain enjoyable to be around. I saw not one — not one — obnoxious, rude, disrespectful, or immodestly-dressed teenager. Their energy was incredible. They gave me hope.

The hotel where I was staying was packed to the gills with young people there for the March. I saw them at night in their pajamas playing cards together at the tables in the lobby, or piled up in the chairs talking and laughing, reading books and doing that thing we all seem to have so much trouble doing these days due to our stupid phones: interacting with each other.

This is one thing you need to know about the March for Life: everyone was smiling.

When I walked by and greeted them, I got big smiles and hellos in return. On the elevator, they were chatting and smiling.

This is one thing you need to know about the March for Life: everyone was smiling. Why? Because they love life, they love women and they love babies. This is not a sour or volatile or hateful crowd. This is a determined army of hopeful warriors fighting for the most just cause of human rights in the world.

I have never felt so totally at ease, so comfortable and yes, safe, among such a vast crowd of total strangers. On the National Mall during the rally, and on the march down Constitution Avenue, shoulder to shoulder in a sea of people I didn’t know, it was more like the world’s largest gathering of friends. 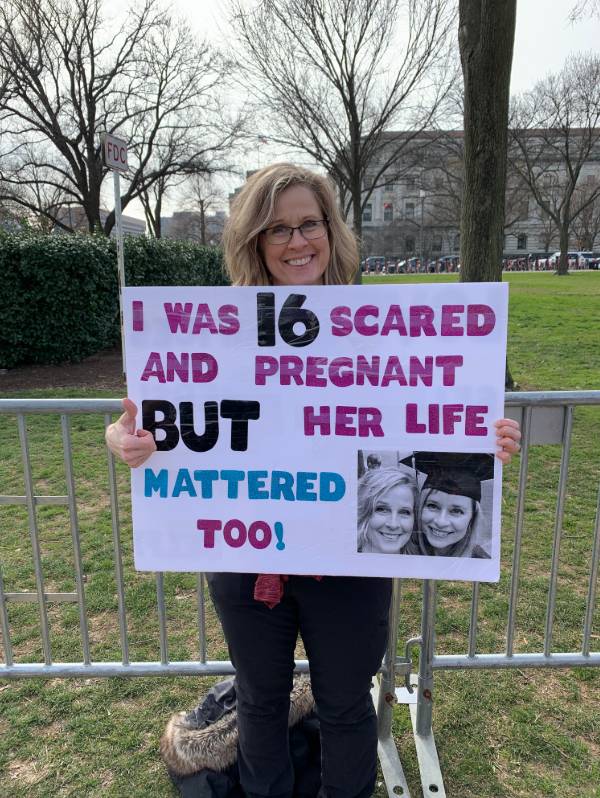 “Shoulder to shoulder in a sea of people I didn’t know, it was more like the world’s largest gathering of friends.”

The only people I encountered who were angry and unsettled were the five or six people standing in front of the Supreme Court building with their banner and microphone shouting at everyone that “a fetus is not a baby” and “women are not incubators.” Mostly they hated President Trump and VP Pence and wanted them thrown out of the country.

Secret Service and U.S. Capitol Police were everywhere. Before the rally started, two agents walked right behind me towing the largest gun cases I’ve ever seen. From my spot near the front right side of the stage, I could have thrown a rock and hit the tall metal platform where two agents stood with those rifles at the ready. I was glad they were there for our President. 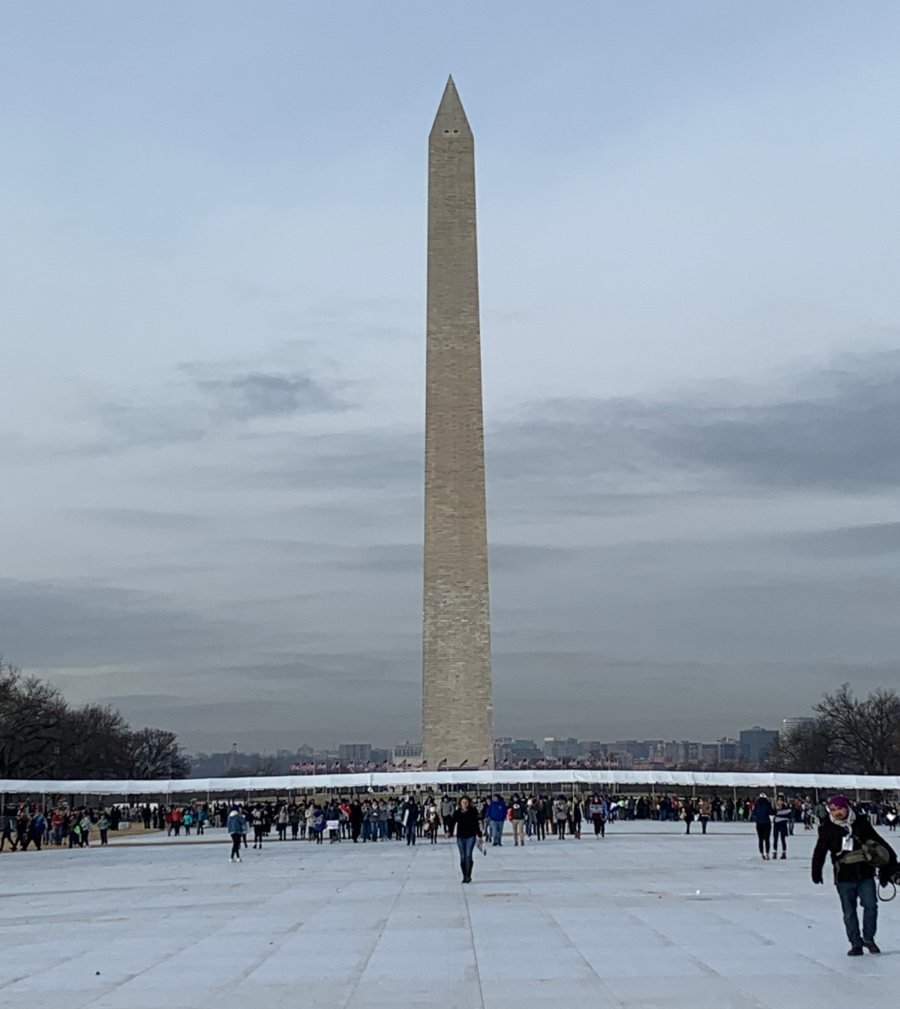 A long row of security booths marked the entrance to the rally.

My impression of the U.S. Capitol Police is that they were a little on edge.

They did not permit any interaction between the marchers and any counter-protesters. At the Supreme Court building, I walked up to the curb to try and read what was on the banner the counter-protesters were holding. I said nothing and made sure I had a big smile on my face, but when the officer saw me looking at their banner, he waved me off quite sternly. I saw another woman try to speak to the woman yelling into the microphone, and an officer quickly motioned for her to move on. Others who have been to the March before will have to say whether that’s standard procedure or something new this year.

He was gracious and presidential. Period. Anyone who criticizes him for what he said and did at the March is a blowhard ideologue, plain and simple. His speech was pitch-perfect. It was not self-serving or pandering. It was not political mumbo-jumbo or empty rhetoric. Yes, he highlighted the specific things he has done to help protect unborn children, to defund Planned Parenthood, to advance legislation that will protect babies in the womb. He reminded the crowd that he has successfully appointed nearly two hundred judges around the country, along with two justices to the Supreme Court. Elections do indeed have consequences, and President Trump has delivered some very positive and life-affirming consequences.

He made history by being the first sitting President ever to attend and speak at the March for Life. It was incredible, and a thrill to witness in person. Thank you so much, Mr. President.

Outside the March, I Saw a Different Scene

Now, one final observation from my time in D.C. Before catching my train back home, I had a couple of hours to kill and I needed to find a gift for a birthday girl, so I went to the Pentagon City mall. While walking around, I saw a group of teenage boys. I heard them coming from a fair distance, and I didn’t like what I heard. I freely admit they made me uneasy. They were vulgar and loud. In a word, they were punks. Pants barely hanging on to their rears, the f-word repeatedly coming out of their mouths, snarls on their faces. I did not want to be anywhere near them, so I walked away fast.

The contrast was striking. The teens at the March for Life were of a completely different variety. They had joy. They were sociable and pleasant to be around. They were well-mannered. They were clean and properly dressed. They were not spewing crude language or flashing the middle finger at people. They were bright, engaging and not threatening. They weren’t angry or sullen or nasty.

Why is that? Give it some serious thought, America.

The bottom line of the March is this: Violence against the child in the womb must stop. The blood of over 60 million children has already been spilled in the name of “choice.” Those with eyes to see know that abortion is the ultimate exploitation of women, not a liberating act. Women deserve better than abortion.

The scores of people who gather to speak for those who cannot speak for themselves may be happy warriors, but this battle to protect the child in the womb has gone on too long. It must be won, once and for all. We must make abortion not only illegal, but unthinkable.