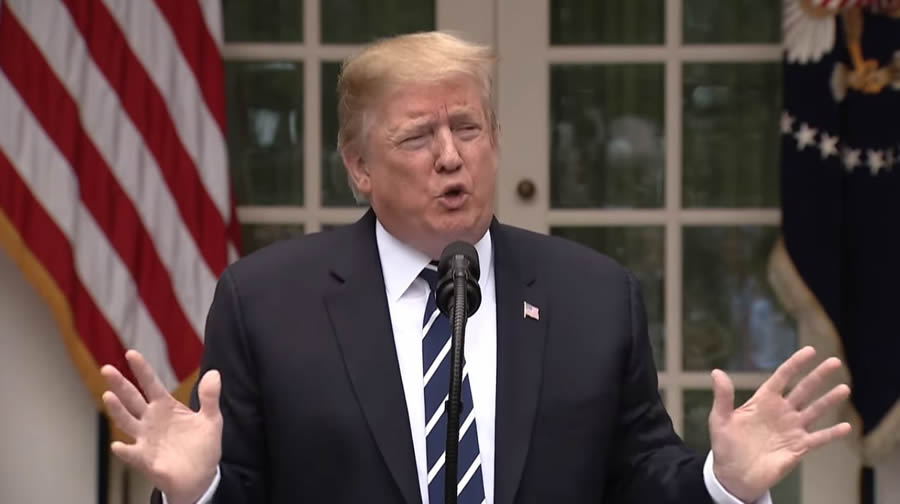 Boy, does the Swamp hate it when Donald Trump doesn’t play by their rules.

Trump was scheduled to meet with Democratic leaders today to again discuss a bipartisan infrastructure plan. Except Nancy Pelosi decided as an opening act to meet with her caucus to debate impeachment, then come out and accuse Trump of a “cover-up.”

In the real world, this is like trashing a guy on Facebook before meeting up with him for a lunch date. Except here, Pelosi fully expected to waltz into the Oval Office for a nice chat after slurring the President. That’s the game, you see. The way the Swamp works.

Except after spending two years of handing over every document Robert Mueller could ever dream of asking for, allowing his closest advisers, including lawyers and family, to testify until their tongues turned blue, after being cleared by the three separate investigations, including the Sainted Bob Mueller’s, Trump has had enough. He cancelled the lunch date.

Trump walked into the Cabinet Room, immediately told the Democrats they had to end their “phony” investigations before he’d negotiate. Then as Pelosi began to speak, Trump turned and headed back to the Oval Office.

Trump then came out to the Rose Garden for an unscheduled press conference. “You can’t do it (negotiate) under these circumstances,” he said. “Get these phony investigations over with.”

“Instead of walking in happily into a meeting, I walk in to look at people that have just said that I was doing a cover-up. I don’t do cover-ups.”

Pelosi looked dumbstruck upon her return to Capitol Hill. How dare this guy stand her up?

“He just took a pass. And it makes me wonder why he did that,” she said. As if to say, “Doesn’t he understand the Swamp rules? Democrats get to call Republicans any sort of name, accuse them of any sort of crime, and the Republican is supposed to say, ‘Thank you, ma’am, may I have another’?”

….Democrat leadership is tearing the United States apart, but I will continue to set records for the American People – and Nancy, thank you so much for your prayers, I know you truly mean it!

As for Chuck Schumer, he thought Trump’s walk-out was just a “pre-planned excuse.” “We are interested in doing infrastructure,” said Schumer, “It’s clear the president isn’t. He is looking for every excuse.”

Funny. Just hours before the White House meeting, The Hill reported that Democrats were wary of making an infrastructure deal with Trump because they don’t want to give him a victory. The only thing they want to fix is Trump’s exit out of town. Leading the charge, billionaire liberal activist Tom Steyer.” Instead of participating in this charade,” he told The Hill, “Democrats should begin impeachment hearings.”

What Steyer calls a “charade” used to be called “governing.” But Pelosi’s rabid caucus won’t allow for reaching agreement with Trump on anything. And Trump is tired of having his administration sabotaged in every way imaginable, legal and illegal.

Mueller’s Report was supposed to be the end of the nonsense, one way or the other. That’s how Democrats billed it for two years. But we knew better. Unless Mueller brought the hangman’s noose, Democrats would search for another way to poison the president.

They simply didn’t expect a Republican to refuse to drink.

If You Believe Pelosi and Schumer, I Want to Sell You a Bridge