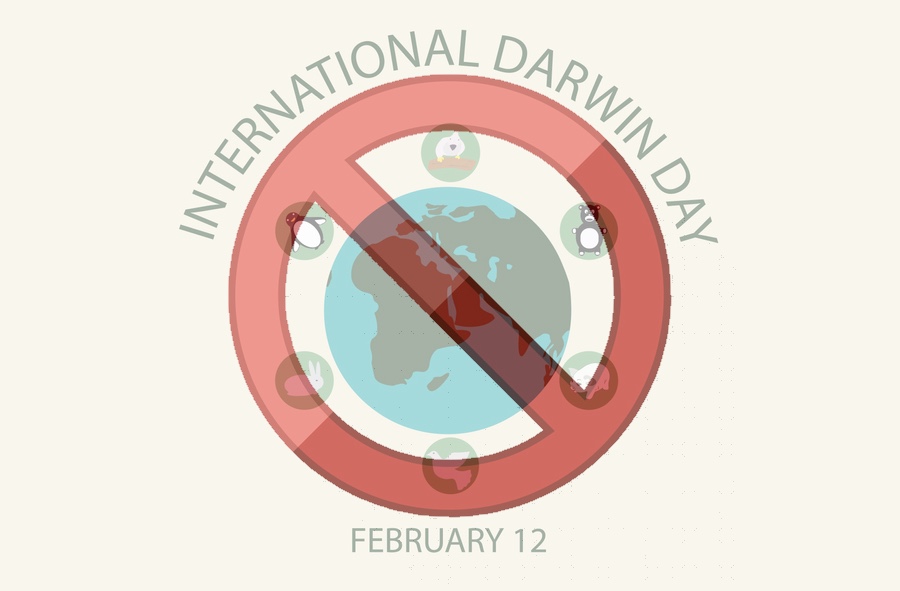 Tomorrow, February 12, is Darwin Day. That’s when some Americans set aside to celebrate the birth of one of the world’s most revolutionary thinkers. Will you celebrate? Not me. This column is as close as I’ll come.

It’s interesting that we don’t celebrate Europe’s other two major 19th-century intellectual revolutionaries, Sigmund Freud and Karl Marx. (Freud lived until 1939, but he published much of his most significant work in the 1890s.)

For Darwin, to be human was to be something even less, as we’ll see in a moment.

Freud was influential through the first half of the 20th century. Psychologists since then have dropped his main theory like a hot grenade. It made humanity less than human. And then there’s the little problem that it lacked all scientific support. His ghost lives on, though, in our destructively distorted views on sex.

Marx altered the map even up until today. He, too, made humanity less than human. So it’s no surprise his work opened the way to tens of millions of murders.

Darwin is partly to blame for it, though. Marx alone couldn’t have stripped us so completely of our humanity. Darwin’s theory “showed” that the human species was the product of unintended accidents (random variation) and natural selection. Natural selection means “survival of the fittest,” where “fittest” is known only by “that which survives.” Every species that’s ever appeared on earth was the product of accidents and the survival of, well, the survivors.

Many staunch Darwinists will grant there’s no meaning behind human existence, but still insist, “I create meaning for myself.” But that hardly makes sense. More likely, it’s meaninglessness creating the illusion of meaning.

How do you get from “survival of the fittest” to “love your neighbor”?

Moreover, it’s the individual’s meaning; and if a Soviet pastor’s meaning meant nothing to Stalin or his successors, then it meant nothing that mattered. Off to the Gulag! Or (for millions), off with their heads.

Marx alone wasn’t responsible for this, but he provided kindling for the fire.

The Cause? Or the Open Door?

Darwinists insist that Darwin didn’t cause Communism, Nazism, or any other evil ism. That’s debatable. What’s not debatable is that naturalistic evolution erases the most important barriers to this kind of inhuman behavior. If humans who possess power also possess the capacity to use that power unjustly over others, naturalistic evolution provides no principle to prevent them from doing so.

All the great religions put up at least part of the necessary barrier by teaching that even powerful people will be held accountable for evil they commit. Christianity and Judaism take it a huge step further yet, explaining humanity itself — and every individual — as having equal worth and being equally loved by the God who created us in His image. Injustice on Stalin’s scale — or even that of a petty criminal — is much less likely for those who adhere to these truths.

But What If It’s True?

What if Darwin was right, though? What if his theory (including its modifications since his day) really is the best scientific theory we have for the origin of species?

The fact that it’s the best “scientific” theory (on that carefully limited view of science) may be the reason it remains popular. The evidence for it is limited, and what there is, is cracking. Scientists claim fossil evidence for the theory. Darwin knew in his day, though, that record was nowhere near complete enough to support all the many, many gradual transitions his theory predicted. One-hundred-sixty years later a few “missing links” have been found, but the fossil record still doesn’t show anywhere near the degree of gradualism Darwin predicted.

The branching “tree of life” looks like evidence, too. That’s growing more and more confused, though, as genetic analysis produces widely differing “trees.”

There’s evidence for small-scale evolution such as antibiotic resistance in bacteria. But even that is quite limited. Research has shown that virtually every case, such “evolution” happens by breaking things, not making them.

That sounds odd, but microbiologist Michael Behe explains it with an analogy. You’re in a car, and need to get to the next gas station or you’ll die, but you know there’s no normal way you’ll get there. What do you do? You reduce weight. You toss out the back seat and rear view mirrors. It breaks the car, but you survive. Genetics can be like that, too: Breaking things can be adaptive. (See further Behe’s Darwin Devolves: The New Science About DNA That Challenges Evolution.

Naturalistic evolution is the best explanation for those who insist on limiting the available options. For those who are looking simply for the best explanation, though, there’s a far better one, one that supports our humanity, too: God. Or as my friend Brad Bright puts it, how do you get from “survival of the fittest” to “love your neighbor”? You don’t. You have to start from the right place to reach the right place.

Who Wants to Celebrate That?

So why do we celebrate Darwin Day? Because Darwin has done the world so much good? No. Because he’s given us such a great scientific explanation of life? Only if “scientific” means you cut off a whole range of potential answers, including God. And even on naturalistic terms, Darwin’s theory is faring less and less well every day.

The same thing happened to Freud. We don’t celebrate Freud Day. Karl Marx doesn’t get a day of his own, even though his discredited theory still lives in the minds of people who find it politically useful. So why do we celebrate Darwin’s Day?

It should be clear that it has little to do with real science.