Are we looking at a sequel to 2016's Trump vs. Hillary? You know how Hollywood loves sequels. 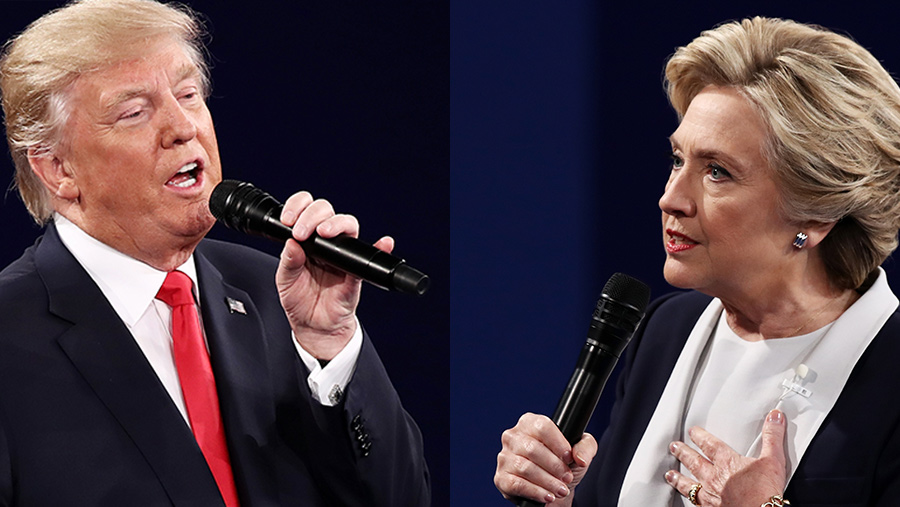 How desperate are Democrats getting? They’re bringing up the H word. Yes, Hillary.

California’s legendary Willie Brown, for example, said the other day, “Clinton is the only candidate short of Barack Obama who has the brains, the battle-tested brawn and the national presence to take out Trump. And Obama can’t run.”

In fact, Brown says the current crop of candidates left him “depressed.” That’s such a slap in the face of his old mistress Kamala Harris, Brown could be charged with domestic abuse.

On the other hand, it does make perfect sense. Since politics has evolved into fictional entertainment, crafted by Hollywood and the news media empires, why not go full Hollywood? And what could be more Hollywood than a sequel to 2016’s ratings blockbuster? As Hollywood knows, it’s a lot easier for Democrats to produce a sequel than come up with a fresh new idea.

Besides, for three years, Democrats have been insisting Trump’s not the “real” President, that he stole the election. Hillary told The View last week — to much applause — that Trump is an “illegitimate president.” So why not a rematch? Didn’t Rocky get a rematch with Apollo Creed? Didn’t the Independence Day aliens get a rematch with Planet Earth?

Hillary herself is being touted as a champ on her latest media blitz. More interestingly, she’s gotten all gussied up, putting aside the frumpy, rumpled, bitter mess she’s been since Election Day 2016. (Or at least she’s gotten rid of the rumpled part.)

You Know She Wants to Do It

You know she wants to do it. You know she is convinced she got robbed. You know she looks at the line-up of Democratic candidates and sees only peons. Posers. Lightweights not worthy of carrying her smashed Blackberry. “Elizabeth Warren? She’ll be right back in the classroom,  ’cause I’ll take her to school.” Uncle Joe? “I got enough unused dirt on Biden left over from 2008 race to end him in a heartbeat!”

And speaking of heartbeat, no doubt she sees Bernie’s hospitalization as a sign. If running against a weak field gave him a heart attack, what would running against Trump do? “Heck, I tripped and fell all across America in 2016, had a massive seizure on 9/11, and lugged around more baggage than ground crews at LAX, and I still never ended up in a hospital!”

As for the rest, “I barely know the names of my security detail. Think I’m going to know those clowns?”

Oh, she’s itching for a rematch. Even if she and Bill had to practically give away their grandchildren to get people to see their little tour. Even if the State Department is finally getting serious about what she did with her government emails. Even as her role paying for the Steele Dossier, and her black bag squad collecting dirt from Russians and funneling it through her sycophants at State, gets clearer by the day. Even though the Justice Department is supposedly finally looking into the pay-for-play with the Clinton Foundation.

Even though she already lost bad to the potty-mouthed playboy billionaire with no election or governing experience.

Oh, she wants it.

Does the Media Want It?

But does the media want Hillary to jump in? Say you’re CNN or any of the networks.  If your choice is Trump versus Elizabeth Warren or “Trump-Hillary II: The Rematch” which would you choose? What’s going to line up the audience: Alien vs Predator II or Alien vs. Geeky Professor?

On one hand you’ve got The Big Bad Orange. The guy you hate but obsess over. Larger than life. A mythic villain. And with Warren? A woman so uninteresting she has to make up the most colorful parts of her life story.

Forget the Pocahontas bit. Did you see the latest? Warren’s been going around the campaign trail insisting she lost her job teaching special needs children because she was visibly pregnant.  Turns out that’s not really true. In a 2007 interview with University of California Berkeley, Warren said she didn’t have the education credits to continue in the gig. In her words, “I went back to graduate school and took a couple of courses in education and said, ‘I don’t think this is going to work out for me.'”

Sure, Joe Biden makes stuff up all the time about his life. But at least his tall tales are entertaining. Being under fire in military zones, marching for civil rights, holding off the Mexicans at the Alamo. When Warren does it, it’s just opportunistic. In this performance, she’s playing a victim. But the thing is: It doesn’t pop off the screen.

Unfortunately, Warren just isn’t grand enough to stand on a stage with Trump. You don’t cast someone with the pizzazz of a PBS fundraising host against Robert Deniro. You don’t put (as someone once did) The Monkees on a bill with Jimi Hendrix.

Oh, the media will make due with Warren. She’ll be feted as the second coming of Eleanor Roosevelt crossed with Harriet Tubman and Susan B. Anthony. But she’ll fall as flat as a Dukakis or John Kerry.

Would It Be Good for the Nation?

But as fun as it might be, would a Trump-Clinton rematch be good for the nation? And shouldn’t that be our ultimate concern?

More interestingly from Hillary’s point of view, Andrew Jackson lost to John Quincy Adams in a nail-biter in 1824, only to turn around four years later, and wipe the floor with him. President Grover Cleveland lost to Benjamin Harrison in 1888. His young bride Francis reportedly told the White House staff, “Don’t cry. We’ll be back in four years.” And sure enough, Cleveland won back the Presidency.

So a rematch on its own isn’t necessarily a bad thing.

However, in this case, with The Resistance having been screaming that Trump isn’t the “real” president; with the Obama administration and the intelligence community having actively worked and continuing to work to sabotage this president; with Hillary Clinton herself having refused to accept her loss in the honored American tradition; with there have not been a “peaceful transfer of power,” a Trump-Clinton sequel smells of something foul and dangerous.

Whatever the entertainment value, a Trump-Clinton election wouldn’t be a rematch. It would be nullification. It would be accepting the blatant lie that Trump’s victory in 2016 wasn’t on the up-and-up. That the first fight was fixed.

And that would endanger every American election in the future. No victory will be considered legitimate when the losers know crying and screaming foul can pay off.

We can pray Hillary will put the nation above her needs. There’s always a first time.