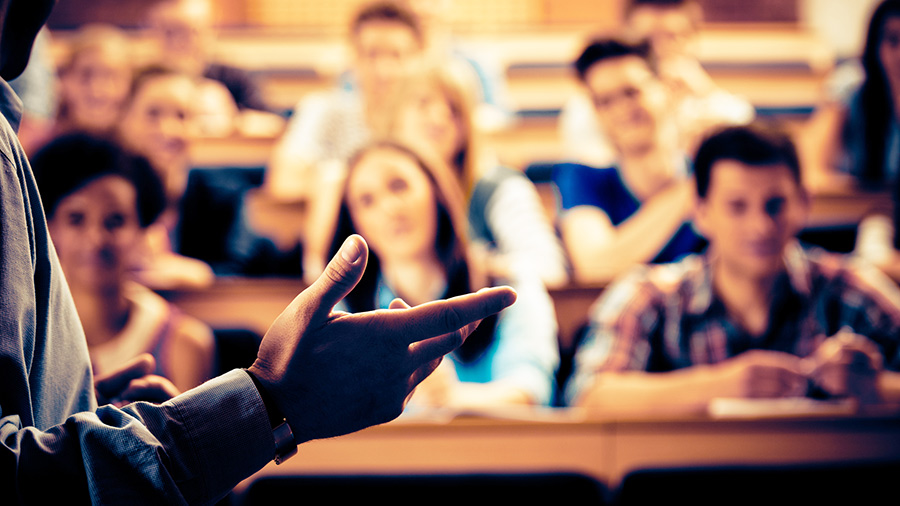 A few higher education stories are making waves. From Jordan Peterson’s resignation to the NCAA’s transgender policies, here’s a run down of what’s happening on college campuses that’s making the news.

Canadian clinical psychologist Jordan Peterson kicked off a firestorm this week with his sudden resignation from the University of Toronto. Leaving a tenured position before the age of 60 is unusual. It’s a bigger step than posting videos criticizing LGBT ideology or defending traditional masculinity.

Yet it’s all related. Peterson explained that it’s easier for him to reach and influence many more people online, and with less hassle. But beyond that, it has become an issue of conscience for him. A central duty of a research professor is to train and mentor graduate students to follow in your footsteps. But, as Peterson explained, his qualified and well-trained heterosexual white male graduate students will have great difficulty landing a faculty spot. One, those three words: heterosexual, white, male. They don’t fit the grid of the Diversity, Inclusivity and Equity mandates which Peterson says have become pervasive in academia. And two, their association with Peterson. He writes:

“I am academic persona non grata, because of my unacceptable philosophical positions. And this isn’t just some inconvenience. These facts rendered my job morally untenable. How can I accept prospective researchers and train them in good conscience knowing their employment prospects to be minimal?”

Peterson goes on to say that there aren’t enough qualified BIPOC people in the pipeline to meet diversity targets quickly enough. BIPOC means black, indigenous and people of color. So, standards will inevitably be lowered to meet targets, with negative ripple effects from there. Including less professional respect for BIPOC scholars. After all, won’t others conclude they were hired based on their ethnicity more than their skills? Peterson offers stinging criticism for academics who privately agree with him but stay silent out of fear.

The losses are a bit larger among undergraduates: A 3.1% drop in the last year. And in every sector: 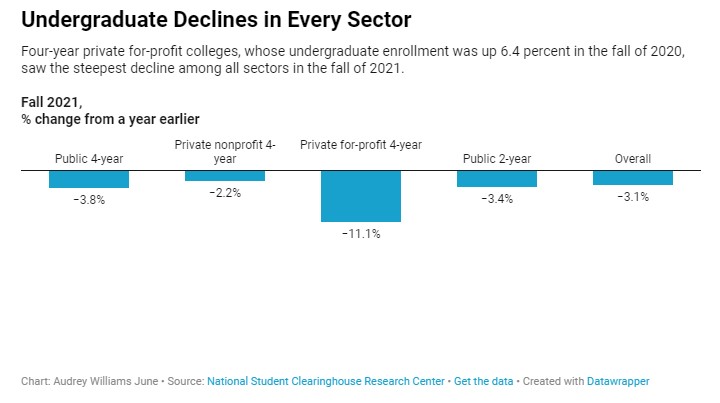 However, the trend pre-dates COVID-19:

It’s actually been dropping since 2012, which folks attribute to economic growth. In stronger economies, more people join the work force and put off education. In the great recession following the housing bust, we saw the opposite. A few years of strong enrollment growth fueled by adults seeking to retrain and acquire new skills.

These more recent declines come as we’re headed for a demographic cliff due to the 2008 birth rate drop. The effects of these missing high school graduates will be felt in 2025-2026. Colleges need to redouble their efforts to attract students with outstanding, relevant academic instruction, delivered in person and at an affordable price.

For now, the silver lining may be that private, nonprofit universities have stabilized freshmen enrollment:

Total freshman enrollment is slightly up, even though for-profit numbers are lower. That’s because private nonprofits service many more students. The for-profit giants are known for online education. Which we all know — at least now we know — is not as good.

In the wake of a transgender swimmer’s recent “victories” — crushing female competitors in the 1650 freestyle by almost 40 seconds, ostensibly breaking records in the 200-meter and 500-meter distances — the NCAA has updated their transgender athlete participation guidelines. And it seems to be a change for the better.

The NCAA’s previous policy was to allow male athletes to compete as females following one year of testosterone suppression. It was under this policy that Lila Thomas — previously known as Will Thomas — was able to compete against women for U Penn after competing as a man, with men, for three years prior to the pandemic.

The new policy, starting with the 2022 winter championships, is that transgender student-athletes will need to document sport-specific testosterone levels beginning four weeks prior to their sport’s championship selections. The goal is two-fold, we’re told. One, to better align the NCAA’s policy with that of the U.S. and International Olympic Committees. And two, to promote fairness and inclusion for everyone. They don’t say it, but one can hope that by “everyone” they mean biological women.

Disapproval from the left has been swift. They say the NCAA is either caving to pressure or passing the buck. The latter because the new policy also calls for transgender participation in each sport to be determined by the policy for the national governing body of that sport. Rather than a pro-trans, one-size-fits-all approach.

But some on the right have also critiqued the NCAA’s new stance. For example, in swimming the governing body is the USA Swimming. But they don’t have a formal policy on transgender athletes. That means that International Olympic Committee (IOC) rules apply. But the IOC, as of now, doesn’t have testosterone requirements.

So, which is it? Where this one’s going is anyone’s guess. Let’s hope the NCAA wakes up to the fact that men and women have innate, pervasive biological differences.