Hey, What About the Feasts?! 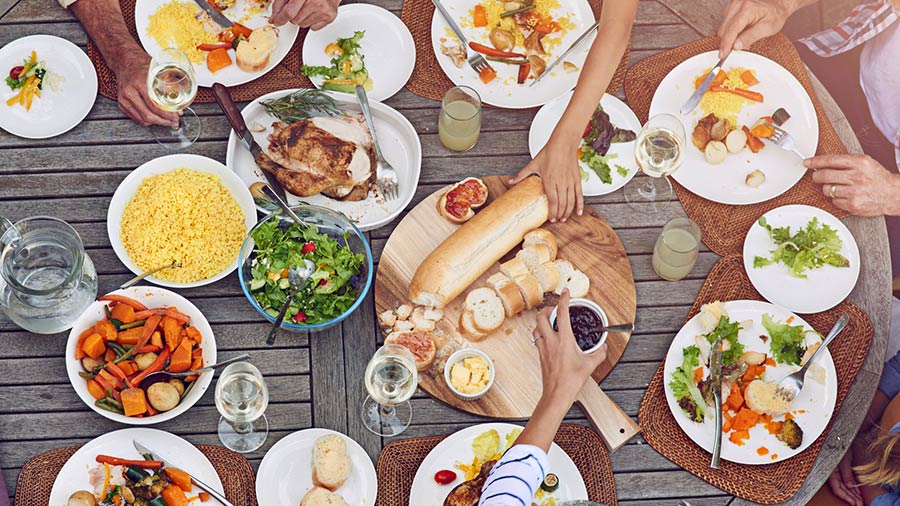 This is the tenth piece in a series on how to develop a fasting lifestyle. Read the entire series here.

You may be wondering why I’ve said a lot about fasts in this series and precious little about feasts.

But do we really need to learn to feast?

By historical standards, most of us feast every day. And on feast days, we have super-feasts. At Thanksgiving, we gorge on turkey, dressing, mashed potatoes, pumpkin pie, bread pudding, sweet cranberry dressing, and more. Much more. And then, when we get sleepy, we blame the turkey! That’s a myth. It’s not the turkey’s fault that you’re sleepy. It’s the crazy infusion of simple carbs.

Debauchery, Not a Feast

But, seriously, we do need to learn how to feast properly. A feast is not an excuse to get drunk and overeat. Too often, that’s what they become. Just think of Mardi Gras (“Fat Tuesday”). It started as a final feast before a long Lenten fast. Yet how many people drunk in the streets of Rio de Janeiro and New Orleans really fast and sacrifice for the next forty days? A feast, wrenched from its context, tends to descend into debauchery. Parade of Mangueira, one of the samba schools in the Rio Mardi Gras Carnival

So, let’s return start at the beginning, with Jesus’ example.

As we discussed in an earlier piece, Jesus fasted for forty days and forty nights before his public ministry. That should be a sign to us as well. But there’s more feasting than fasting during His earthly ministry. So much, in fact, that it seemed to cause scandal.

We know that John the Baptist led an austere life in the desert, what with his camel hair tunic and meals of locusts and honey. John’s disciples also fasted. And they were bothered that Jesus’s disciples seemed a bit slack.

“Then the disciples of John came to him,” Matthew tells us, “saying, ‘Why do we and the Pharisees fast, but your disciples do not fast?’ And Jesus said to them, ‘Can the wedding guests mourn as long as the bridegroom is with them? The days will come, when the bridegroom is taken away from them, and then they will fast.’” (Matthew 19: 14-15 RSV)

Jesus and His disciples also followed the major Jewish feasts. We know from John that they attended at least three Passovers in Jerusalem. Indeed, the Last Supper that Jesus shared with his disciples before his death was during Passover. That’s when He transformed the Jewish holy day into another feast that Christians enjoy to this day.

That’s why, from very early on, Christians treated every Sunday (the day of Christ’s resurrection) as a little feast day when they partook of the Lord’s Supper. And it wasn’t long before they made the Jewish holy days of Passover (Easter) and Pentecost major Christian feasts.

By the fourth century AD, Christians were celebrating Christ’s birth (Christmas) and the visit of the wise men (Epiphany). They continued to add more feasts over the centuries — with all of manner of saint days becoming major feasts in some countries. Things got out of hand, so the Church had to prune things back — though countries and regions often retain feasts associated with special saints. Think, for instance, of Mexico and Our Lady of Guadalupe. Or Ireland and St. Patrick.

Whatever the details, Christians everywhere and for centuries have enjoyed feast days/holy days to celebrate what God has done in the life of the Church. And most still do.

Orthodox Christians still have the most intense fasts and the largest number of major feasts. That’s no coincidence. A feast is a break from both fasting and our normal routine. Without the fasts and routines, though, feast days seem to lose their meaning. The eating and drinking remain. The reason for the holiday (“holy day”) fades from view.

If we want to recover a fasting lifestyle, we need to include proper feasts as well.

Next up: what to do in week three to adapt to the fasting lifestyle.

Jay Richards is the Executive Editor of The Stream;and an Assistant Research Professor in the Busch School of Business and Economics at The Catholic University of America. Follow him on Twitter.

Did God Abandon Jesus on the Cross?

Let This Lent Leave You Different