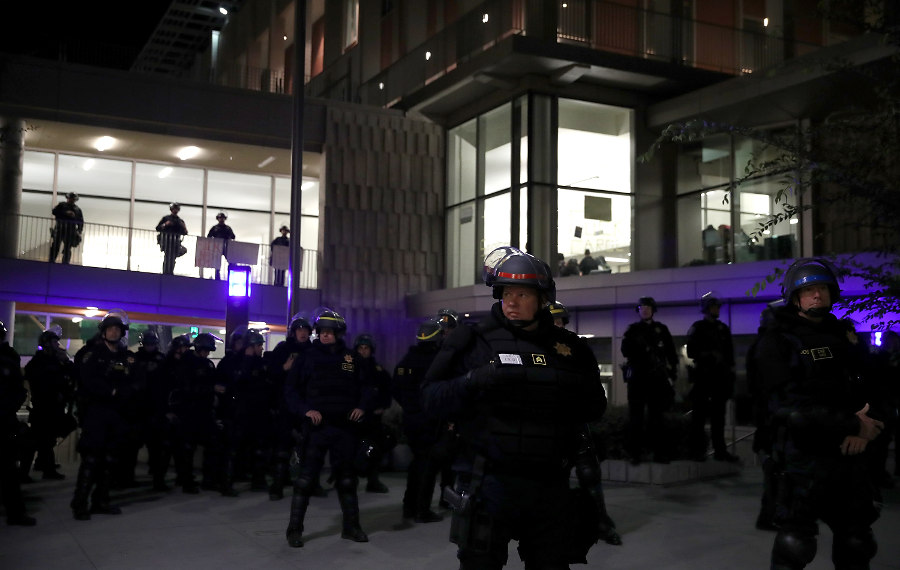 In this Sept. 14, 2017, photo, California highway patrol officers stand guard outside of Zellerbach Hall on the U.C. Berkeley campus on in Berkeley, Calif.

I, and my friend Christopher Piquette, were going to cover the Ben Shapiro speech at University of California, Berkeley.

While Shapiro had spoken at Berkeley in 2016 with little fanfare, this time was quite different. In February, 150 masked individuals, likely some from the group Antifa, descended upon the Berkeley campus ahead of a scheduled Milo Yiannopoulos appearance, causing mayhem and destruction that left six people injured and damage in the six figures.

At a pro-Donald Trump march in March, seven people were injured and 10 arrested. One attendee told the Los Angeles Times, “he pursued a counter-demonstrator down a side street and found himself surrounded by a dozen protesters in black masks who he said attacked him with sticks and pepper spray,” the black masks suggesting Antifa may have been involved.

And just last month, about 100 ”black clad anarchists,” according to the Associated Press, circumvented police barricades and attacked at least five people from what was a peaceful protest.

With conservative speaker Shapiro coming to Berkeley, no one knew what to expect. Would Antifa attack people at the event? Would the police allow them to mingle and then assault the crowd? Would there be violence?

Berkeley appeared to be taking security more seriously this time. An emergency City Council decided to reverse a 20-year ban on police using pepper spray against rioters. Barricades were set up outside Zellerbach Hall on Bancroft Way. While some thought this went too far, the university also made the decision to not allow seating at the upper section of Zellerbach Hall for fear Antifa would throw objects, including the chairs, on the audience below. Despite the extensive security measures, many were concerned.

We arrived at the counterprotest before the Shapiro speech and were immediately awestruck by the strong police presence. There were heavily-armed officers along the streets and covering the alleys. Every direction you looked, there were groups of police keeping an eye on the crowds. The event security was intense, with a long list of banned items, metal detectors, and barricades preventing anyone who had any ideas about sneaking into the event without a ticket.

Upon going through security, we walked down a corridor with many police officers on both sides. Inside the auditorium there were additional officers. The speech itself was uneventful from a security perspective, with the audience either agreeing with Shapiro or supporting free speech by listening to a viewpoint they may not have agreed with.

During the event, the counterprotesters continued their speeches and chants, and despite there being many vulgar chants directed at the police, there was no obvious violence. Once Shapiro’s appearance concluded, the 700 or so people were escorted outside and made to walk nearly three-quarters of a mile out of the way so as to not run into the counterprotestors.

As we walked along the corridors through the deserted campus, we appeared to have at least 200 police officers on either side of us. Back at the intersection of Bancroft Way and Telegraph Avenue, hundreds of police officers stood ready should anything happen.

While most of the crowd dispersed, a few people from both sides started to form a group where there were chants of ‘Fascists, go home.’ The police occasionally walked through the group and stood between people with opposing views until the tensions subsided.

During this time, there were two scuffles that broke out, and both were immediately broken up by police. One scuffle led to an immediate arrest, while another resulted in someone laying hurt on the ground before being taken away on a campus vehicle for treatment. Despite the tension, and although there ended up being nine arrests throughout the course of the evening, I felt safe.

I felt safe because there was a strong presence of law enforcement officers who were enabled to do their job of protecting citizens and maintaining the peace.

It is sad and unfortunate that the violent actions of Antifa have forced a city and university to spend upward of $600,000 that could have been used for education or helping the poor, but what choice did they have? As Americans, we have a constitutional right to free speech.

If armed protesters try to infringe on that right, or any other right for that matter, we as citizens can and should expect that our government will defend us. And as shown in Berkeley last night, if the police are enabled, we can feel secure and be protected from violent agitators with intent on quelling free speech.

Many have and will continue to cite the high monetary cost of security as a reason to not have other conservatives speak, especially in left-leaning cities like Berkeley, but that cannot be a deterrent. Free speech is the core of our American rights, and if Antifa is willing to attack this freedom with violence, then we must be willing to defend it at all costs.

Christopher Piquette contributed to this article.