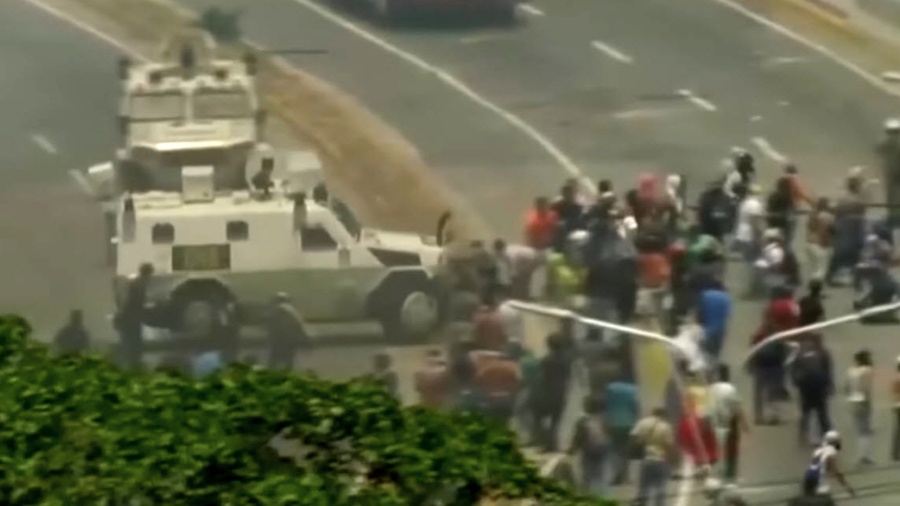 Armed conflict and protests rocked the Venezuelan capital of Caracas Tuesday after Juan Guaido, president of the National Assembly, called on the military to overthrow Venezuelan President Nicolas Maduro.

Guaido’s call came Tuesday morning in a three-minute video declaring the uprising as the “final phase” of his plan to oust Maduro as an illegitimate leader, according to CBS News. Members of the military friendly to Guaido’s cause surrounded the opposition leader in the video shot at La Carlota air base.

“The moment is now,” Guaido said, to launch what he called “Operation Liberty,” according to The Washington Post. Formerly detained journalist and activist Leopoldo Lopez also appeared in the video after Guaido forces freed him earlier Tuesday.

The Situation on the Ground

Guaido-backed military members along with thousands of protesters are marching through Caracas toward the Venezuelan Presidential Palace. It is unknown whether Maduro is at the palace, known as the Miraflores.

Maduro’s military forces have tangled with protesters while trying to disperse the large, and sometimes violent, crowds. Maduro’s forces have used tear gas and intimidation tactics, and, in at least one instance, military personnel rammed into a crowd of protesters with an armored vehicle, appearing to injure several.

The civilians appeared to be threatening the military personnel inside the vehicle with rocks, sticks and other objects. Venezuela’s health ministry says at least 69 people have been injured so far in Tuesday’s uprising, BBC reports.

Maduro’s forces shot tear gas into pro-Guaido crowds throughout Caracas, including at a city mall and around La Carlota. Several firefights have also broken out between members of the military supporting Maduro and Guaido.

Video footage on Twitter shows shots being fired on a key route to the La Carlota air force base in Caracas.

La Carlota, where Guaido’s uprising began, is situated in the heart of Caracas. Directly west is the Fuerte Tiuna military zone which stands between Guaido’s forces and the presidential palace of Miraflores. Fuerte Tiuna remains under Maduro’s control.

President Maduro tweeted early Tuesday morning calling the military activity a coup and said that military leaders are fully loyal to him. “Nerves of Steel!” Maduro tweeted. “I have spoken with the commanders of all the REDIs and ZODI of the country, who have expressed their total loyalty to the people, to the Constitution and to the fatherland. I call for maximum popular mobilization to ensure the victory of peace. We will win!”

Venezuela Foreign Minister Jorge Arreaza has denied that the Venezuelan military is revolting against Maduro. Arreaza blamed the conflict on the U.S. and accused Guaido of leading a “coup” against Maduro at the direction of “the Pentagon and Department of State, and by [U.S. National Security Adviser John] Bolton,” Arreaza said in an interview with Reuters.

The Maduro regime has ordered several media companies off the air since the revolt began. Regulators with Conatel, the Venezuelan agency that oversees telecommunications, ordered various cable and television companies to block both CNN International and the British network BBC from airing in the country. The regulators have also ordered at least one local radio station to stop broadcasting.

How is the U.S. Responding?

President Donald Trump announced Tuesday that he is monitoring the situation in Venezuela and supports the Venezuelan people. Trump has spoken about the revolt in Venezuela with other world leaders, such as French President Emmanuel Macron.

Both Vice President Mike Pence and Secretary of State Mike Pompeo have also tweeted their support for Guaido and Operation Liberty.

I am monitoring the situation in Venezuela very closely. The United States stands with the People of Venezuela and their Freedom!

The U.S. is prepared to provide economic relief to Venezuela, which is under a slew of U.S. sanctions, after Guaido is installed as interim president, according to a Tuesday statement from the U.S. Treasury. Arreaza characterized the U.S. Treasury’s statement as “another criminal confession of the Trump government,” referring to his claim that Guaido’s revolt was planned by U.S. officials.

Where Does the Rest of the World Sit?

Brazil and Colombia — both sharing a border with Venezuela — are backing Guaido’s revolt, as is another South American country, Peru.

“We fully support the interim President [Guaidó] in his struggle to restore democracy in Venezuela. The usurping and dictatorial regime of Maduro must come to an end,” Peru’s ministry of foreign affairs said in a statement.

Maduro’s regime is backed by nearby Cuba, as well as China and Russia.

This is a developing story.

US to Offer Guaido ‘Range of Options’ to Help Topple Maduro

Bolton: US Has ‘Special Responsibility’ to Constitutional Government in Venezuela