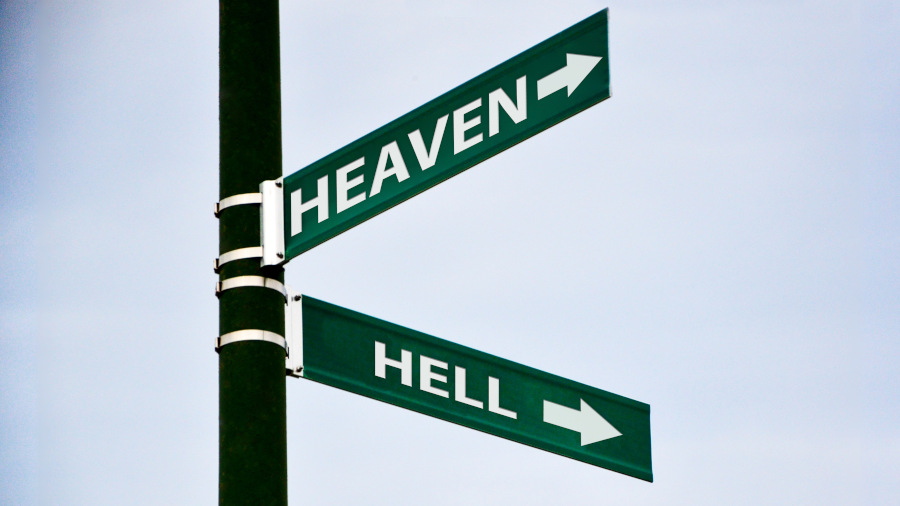 There’s been a debate reignited recently between intelligent and thoughtful Catholics regarding hell and the population thereof. Is hell empty, full, or something in-between? Is hell even real? How does a soul get there? The different thoughts of such great minds as Origen, Aquinas, Augustine, and Balthasar are central to the discussion.

The focus of the recent debate has been over whether we can “reasonably hope” that all souls will be saved. (Gentle reader, please understand that here “reasonably” may not mean what you think it means.) Bishop Robert Barron leads the Balthasar “reasonably hope” team, with a thorough explanation of his arguments here.

(For the record, the Catholic Church rejects the universalist theory that everyone will be saved and hell is empty, and instead says that we do not know and cannot know if any soul is in hell or not. We know that hell is indeed real and a real possibility for every human being. Each of us has free will, and God never violates our free will.)

Eternal Hell Isn’t the Only Kind

I can’t answer the debate with any special knowledge or certainty. But it seems to me that eternal hell is not the only kind Christ came to conquer. There is tangible, practical hell all around us right now, and He surely lived, died and rose again to lead us out of hell on earth.

Both hells are the result of the same thing: our sin.

We endure torment on earth due to our selfishness, greed, idolatry, violence, perversity, sexual immorality, hatred, indifference, and pride. That’s all sin. It isn’t just unavoidable human nature. It isn’t some inescapable human existence that has no remedy. The chaos and horror in the world don’t come to be by accident or bad magic. It’s all the consequence of our sin, which is our fault.

How could anyone doubt the existence and reality of hell when we’re surrounded by it every day in every direction?

There is a Remedy!

Jesus said He came that we might have life and have it abundantly. Hear in that not a “prosperity gospel” but the reliable consolation that if we will turn away from our wickedness and obey God, we will not only save our souls, we will stop creating hell on earth. Repentance of sin always brings more abundant life. Sowing and reaping virtue naturally produces good gifts in abundance. Pursuing holiness leaves less time making trouble.

The point of following Christ is to be renewed, transformed, born again. By the power of His grace, we leave behind the old ways of sin and death and misery and choose to follow the rule of Love, which is loving the Lord your God with all your heart, soul, mind and strength, and loving your neighbor as yourself. Love is everything St. Paul describes in 1 Corinthians 13.

Love is truth. To love God means to obey Him in all things. To love our neighbor means to want only what is truly good for that person.

We know surely what love is not: it is not greed or slavery or sexual perversion or divorce or abortion or war or violence or abuse or addiction or lies or hatred or indifference.

Maybe Hell for Thee, but Not for Me

A survey done about twenty years ago showed that of those who believed in a soul and an afterlife, 76 percent believed they were destined for heaven and not hell. Not much fear of consequences or accountability for our actions, it would seem. Do we think much has changed in recent years?

If love does not change us here, now, in this earthly life, then why should we hope for Love to spare us after death? Why should we presume that we will ultimately avoid eternal damnation, or whatever we imagine hell to be, if we’re indifferent to the hell we’ve condemned others to suffer right now?

We do well to tremble a little at the thought of our eternal destiny, and that of our neighbors, knowing that our actions have consequences either for good or evil. Imagine how different things would be if we genuinely feared hell. Imagine if Christians genuinely feared the death of the soul — their own and their neighbor’s.