Harvard: From Promoting Christ to Promoting an Atheist Chaplain 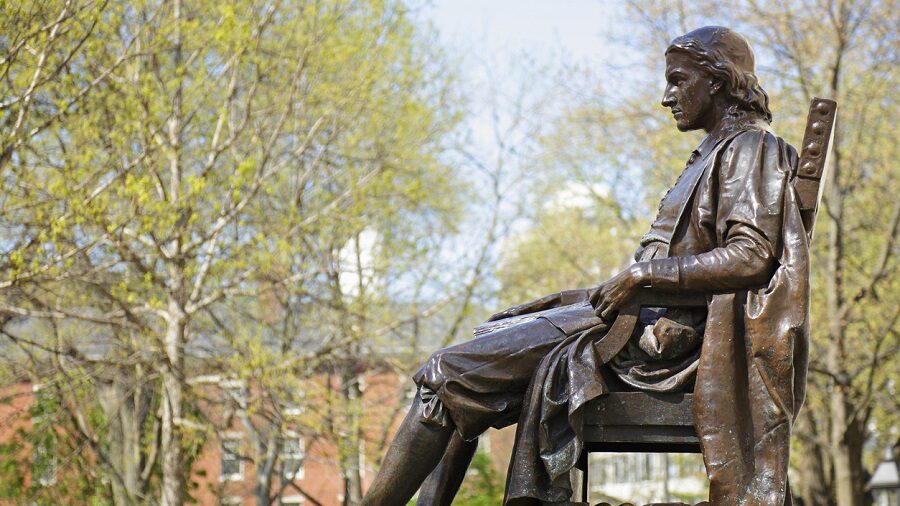 By Jerry Newcombe Published on September 2, 2021 •

The Reverend John Harvard must be rolling over in his grave.

America’s oldest and most prestigious university, named in the Congregational minister’s honor, just promoted a “devout atheist” to be their head chaplain.

This is not surprising since Harvard jettisoned its Christian roots long ago. But it’s shocking nonetheless. What’s the point of a chaplain if he doesn’t even believe in God?

The Daily Mail writes: “Greg Epstein, 44, who was raised in a reformed Jewish household in Queens, New York, was named president of the chaplains for the religious community at the school after serving as Harvard’s ‘humanist chaplain’ since 2005.”

They add that Epstein will be overseeing “40 university chaplains, who lead the Christian, Jewish, Hindu, Buddhist and other religious communities on campus.”

Epstein is the author of a book that has a dubious premise. It’s entitled, Good Without God. I say “dubious” because atheism by definition excludes divine accountability.

Even if an atheist happens to be a very nice person, he is tied into a worldview with no transcendent accountability. That means people can do what they want and not have to give an account to God for their actions (or so they delude themselves). To paraphrase Dostoevsky: If there is no God, then all things are permissible.

In the 20th century, we repeatedly saw the deadly effect of that unbelief in Communist countries and under the National Socialists in Germany.

As the great British historian Paul Johnson notes in his book, The Quest for God, all the failed totalitarian regimes of the twentieth century were “godless constructs.”  Johnson says, “The death-camps and the slave-camps were products not of God but of anti-God.”

In 1999, Harvard University Press even published a big volume, called, The Black Book of Communism, which documents how in the 20th century the anti-Christian, atheistic philosophy of Karl Marx led to the deaths of at least 100 million human beings — usually by their own governments.

Meanwhile, it was not the atheism of the new head chaplain that created Harvard. It was Biblical Christianity.

The Puritans founded Boston in April, 1630, and their leader, Rev. John Winthrop, quoted Jesus when he said, “We shall be as a city upon a hill.” By September of the same year, they laid out plans for a school to train future ministers of the Gospel of Christ. This was the genesis of Harvard.

Even today at Harvard you can see chiseled in stone these words (in older English): “After God had carried us safe to New England, and we had built our houses, provided necessaries for our livelihood, reared convenient places for God’s worship, and settled the civil government, one of the next things we longed for and looked after was to advance learning and perpetuate it to posterity; dreading to leave an illiterate ministry to the churches, when our present ministers shall lie in the dust.”

Last time I visited there, I noticed they had planted a tree in front of this plaque. It used to be more visible.

The Puritan fathers began the college in 1636, and two years later, Congregational minister Rev, Harvard died of tuberculosis. In his will, he donated a large sum of money and his books for the school. They named the college in his honor.

Harvard was a Christian school for at least two centuries.

Truth for Christ and the Church

Walk around the campus, and you can still see the statue of Rev. John Harvard in his Puritan garb and with a large open Bible on his lap. Selfie-takers love to rub one of the statue’s shoes, perhaps for good luck.

The original motto of Harvard was (in Latin): “Truth for Christ and the Church.” Sometime in the 20th century — at least later than 1914 — they cut off the last part of the motto and just stuck with “Truth” (Veritas). I mention that year because you can still see on the main library building the “Christo” and “Ecclesiae” part, and that building dates from 1914.

“Laws and Statutes for Students of Harvard College” of 1643 began by stating: “Let every student be plainly instructed and earnestly pressed to consider well the main end of his life and studies is to know God and Jesus Christ which is eternal life (John 17:3).”

The students at Harvard learned the Bible — not only in English, but in the original Hebrew and Greek. And on it goes with Harvard’s Christian origins.

But in the 19th century, compromises were made towards Unitarianism, which stands in contrast to the Trinitarian beliefs which created Harvard. This compromise led to other compromises, where eventually they cut Truth off from Christ and the Church. And now they’ve even hired an atheist as the head “chaplain.”

All I can say is, “O Lord, revive the work of Thy hands.”

Jerry Newcombe, D.Min., is the executive director of the Providence Forum, an outreach of D. James Kennedy Ministries, where Jerry also serves as senior producer and an on-air host. He has written/co-written 33 books, including George Washington’s Sacred Fire (with Providence Forum founder Peter Lillback, Ph.D.) and What If Jesus Had Never Been Born? (with D. James Kennedy, Ph.D.).

When Harvard Hired an Atheist to Be Chief University Chaplain