Some random ramblings on the occupants of the Oval Office. 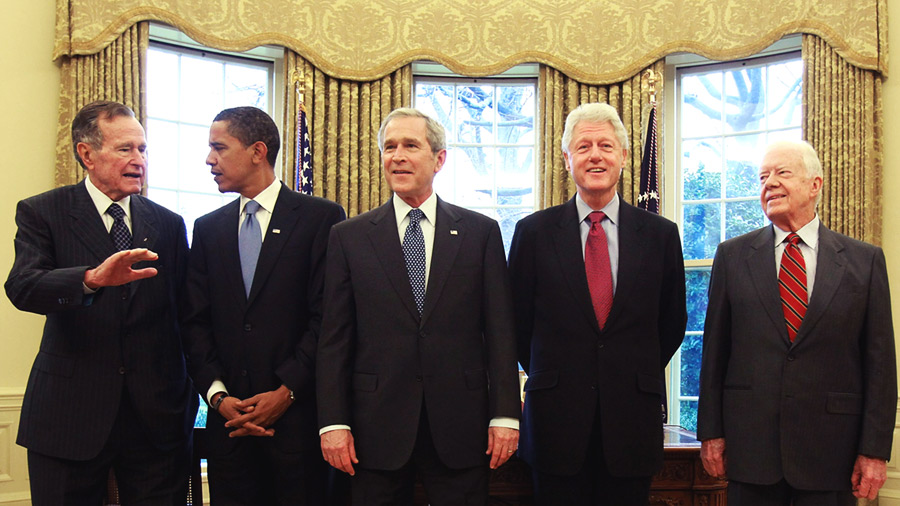 Here’s to ya, Millard Fillmore.

Every year, we set aside a day to honor the 44 men who have served as President of the United States.

Grover Cleveland counts twice. Not for his ample girth, but because he was our nation’s 20th and 22nd presidents. Cleveland also ranks as among our most tabloid-y of Presidents. He could even give Trump a run for his money. Cleveland not only admitted to fathering a child out of wedlock, he ended up getting hitched while in the White House. And to not just anyone. He married his former ward, Francis Folsom, the daughter of his former law partner. Cleveland had been entrusted to look after young Francis upon her father’s death. The bachelor President was asked why he had waited so long to get married. He reportedly replied, “I was waiting for my wife to grow up.”

Cleveland was our second heaviest president. Topping the scale was William Taft. Taft weighed in at nearly 340 pounds. However, every baseball fan should be grateful for Taft’s tubbiness. He loved going to games, but squeezing into a seat wasn’t so easy.  He would reach a point where he’d get so uncomfortable he would stand up and stretch. Folks figured that if the President stood up, perhaps they should as well. And so was born the Seventh-Inning Stretch.

Taft has another distinction. After leaving the Presidency, Taft became Chief Justice of the Supreme Court. That was actually his dream job. Taft never really want to be President, but was pushed into running by his wife. Nellie Taft had treasured visions of living in the White House since her family visited her father’s old law partner Rutherford B. Hayes when he was President in 1877. The teenager vowed she would only marry a man who could be president. She got her wish.

Bess Truman was no Nellie Taft. She hated life in the White House fishbowl so much that she fled the Swamp, spending most of her time at the Truman home in Independence, Missouri.

One has to wonder how “Give ’em Hell” Harry Truman would have fared in the instant world of Twitter. He was known to write expletive-filled outrages to media figures. Thankfully, Truman would hold off sending the letters until he had cooled off.

Cooling off was not Calvin Coolidge’s problem. Coolidge was like stone. He was notoriously reserved. In terms of personality, he was the ultimate anti-Trump. When someone said to Coolidge, “I bet I can make you say more than two words,” the president replied, “You Lose.” His Secret Service name could have been “Cold Fish.” That is, except when it came to his wife Grace. White House workers reported that he so dearly missed his wife when she was away, he would race daily to the White House mail room and throw himself into the piles of arriving mail, madly scrambling on the floor for word from his bride.

Presidents are People Too

The above anecdotes — and the thousands more we could dig up — point to something we tend to forget: “Presidents are people too.”

Each has his likes, dislikes, pet peeves and pet favorites. Each one has dealt with good days and bad. Some have had to endure national tragedy, and many have endured personal ones. A train accident on the way to his inauguration claimed the life of Franklin Pierce’s son. Pierce and his wife saw their youngest child, Benjamin, decapitated before their very eyes. Pierce never recovered from the grief. John Kennedy lost a newborn son only months before his assassination. Lincoln mourned his precious son Willie in the midst of the Civil War.

The Father of Our Country George Washington never had any biological children of his own. On the plus side, he also didn’t have a son dance in his underwear on Saturday Night Live. That honor went to Ronald Reagan, when son Ron hosted SNL and spoofed Tom Cruise’s classic dance from Risky Business.

A professional ballet dancer, Ron was actually very good. No wonder, given that both his parents were entertainment pros.

Thomas Jefferson was also an entertainment pro. Jefferson was a violinist who earned extra scratch during his William & Mary days by playing around Williamsburg. He would later become a top collector of instruments and sheet music. As if he didn’t have enough to do. The culture spends so much time trying to tear down Jefferson, today would be a good day to quickly reflect on just how remarkable Jefferson was.

Jefferson ranked as a leading botanist, meteorologist, architect, designer, horticulturalist, naturalist, linguist, educator, engineer and inventor. And author. Sure, John Kennedy and Barack Obama wrote best sellers years before becoming President. So did Jefferson:  According to Wikipedia, Notes on the State of Virginia is widely considered the most important book written in America prior to 1800. Oh, and he wrote it in French. His other best seller?  A little thing called The Declaration of Independence.

You like domestic wine? Thank Jefferson. He passionately argued that the new nation was capable of having a wine industry to rival France, and he set out to make it happen with two vineyards at Monticello. In fact, he was America’s premiere viticulturalist. Jefferson didn’t quite pull off his own wine. But a neighbor in Charlottesville soon did. The American wine industry was born.

And today, just a couple miles down the winding road, Jefferson’s dream is fulfilled at another winery: Trump Winery.

With that history in mind, let’s raise a glass to all those who have served as president and to all those yet to come. Thank you for stepping into the toughest job on the planet. Sitting behind the desk where “the buck stops.” Standing before the nation in times of tragedy to comfort your “fellow Americans.” Sharing the credit for victories. Taking the heat for failures. Even four times taking a fatal bullet.

We are grateful for your service and commitment to the peaceful transfer of power.

And, to you, Mr. President, thank you for putting aside your beloved business to lend yourself to the people’s business. I’ve been to Trump Winery on the East Coast. And to Trump National Golf Course on the West Coast. I’ve seen the assorted resorts and hotels. If that were my day job you couldn’t drag me to the White House. So again, thanks.

We pray you continue committing yourself to executing the tasks required by the Constitution.  And we’ll continue to commit to the task set out for us by Holy Scripture: to pray for our leaders.

Al Perrotta is the Managing Editor of The Stream, and co-author of the upcoming Politically Incorrect Guide to Immigration.