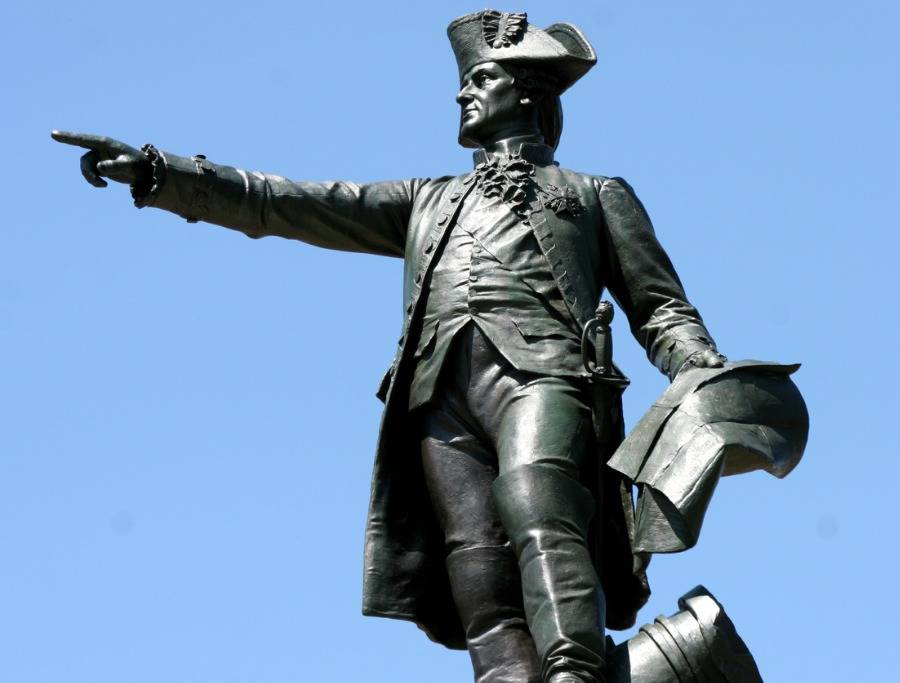 I know it isn’t fashionable to celebrate the Father of Our Country. After all, he was white. He was a slave owner (who willed that all his slaves be released after his wife’s death.) Worst of all, he helped birth a nation and system of government that leftists love to sulk about, even as they soak up its unbelievable bounty and blessings.

You’d think liberals would love the guy. After all, one of the most famous tales about George Washington has him tossing money away.

Actually, the story of young Washington throwing a quarter across the Potomac is a fiction. Just like the tale of him chopping down a cherry tree, then telling his pops “I cannot tell a lie.” These were stories created by a guy named Parson Weems. CNN didn’t event fake news.

What isn’t fake is the almost mythic status Washington held in his own day. Washington was a massive, imposing figure, built like an NFL linebacker. Atop his huge white horse, he dominated his surroundings. In battle he was thought to be impervious to bullets. Even off the horse, he stood tall over any room he entered.

The stoic stature you find in paintings and sculptures was precisely what you found in his public demeanor. Washington, through strict self-discipline and force of will, presented himself with a dignity and quiet power that brought everyone from soldiers to statesmen to hushed awe. Washington crossed the Delaware. Pity the fools that crossed him.

Respect? Less than 30 years after the Revolutionary War, British Navy ships were storming up the Potomac toward the new capital of Washington, D.C.. It’s the middle of The War of 1812 and payback was going to be hell. So fearsome were the British that soldiers at a fort along the river fled into the Maryland woods without firing a shot. The city, including the new White House, was burned to a crisp. And yet, when the mighty British passed Mount Vernon they made a point of leaving Washington’s home alone out of respect for the General who had whupped them with his ragtag army. In the dining room at Mount Vernon you’ll find an ornate, elaborately-carved fireplace mantel. You might even say it’s gaudy, especially given the understated decor you find elsewhere in the house. Washington liked purchasing the best of whatever he was buying, but his tastes were simple. In fact, he hated the mantel.

However, the mantel was a gift from a treasured friend. And out of respect for the friend, Washington gave the mantel a place of honor in his home.

Imagine a fire in that fireplace. Imagine yourself in that dining room in the mid-to-late 18th Century. You’ve been invited to dine at Mount Vernon. Of course, you are honored beyond all measure. But you’re not exactly unique. Martha Washington grumbled that she and her husband had so many guests they hadn’t eaten alone together in years. Still, what a thrill. An evening with General Washington!

Yet, you notice something rather peculiar. The dining room does not have a grand and glorious table. Instead, peeking under the table cloth you see it’s just a big plank supported by saw horses. What gives?

After the meal you quickly come to understand. In a flash the table is removed. The dining room is turned into a dance hall. For the Father of Our Country was footloose. He loved to dance. In fact, he was considered quite skillful and polished. The minuet was in vogue, and as a relative recounted, it “was peculiarly calculated for the display of the splendid figure of the chief and his natural grace and elegance of air and manners.”   Washington the Great Warrior himself referred to dancing as “the gentler conflict.”

How much more fun would history class have been had teachers taught that George Washington liked to bust a move?

You too can “Move Like George.” Each year, Gatsby’s Tavern Museum, just up the road from Mount Vernon in Alexandria, Virginia, hosts the George Washington Birthnight Banquet and Ball. This year’s event took place last weekend.

You’ve heard the saying about Washington: “First in War, First in Peace, First in the Hearts of His Countrymen.” Well, Washington did like to be first. He was competitive, one of the best horsemen in America. He enjoyed games of chance. (A polite way to say he liked to gamble.) But my favorite Washington story comes by way of a painter staying at Mt. Vernon while doing the General’s portrait.

It was a fine Sunday morning. A bunch of young military officers were hanging out on the lawn in front of Mount Vernon. America’s buffest and best had their shirts off, engaged in a contest to see who could throw a tree stump the farthest. Heave after heave they went.

Up rolls Washington’s carriage returning from church. By this time Washington was well into his 50’s, twice the age of the young studs. He steps out of the carriage dressed in his full Sunday best. Surveys the scene. Washington walks over, picks up the stump, effortlessly heaves it far past anything the officers had managed.

Said Washington, “When you can match that, come and get me.” And strolled into the house. On Our National Day of Prayer: George Washington’s Prayer for the Nation