UPDATE: As predicted, "Warriors" is now leading contender to be new name of Washington's NFL Team. 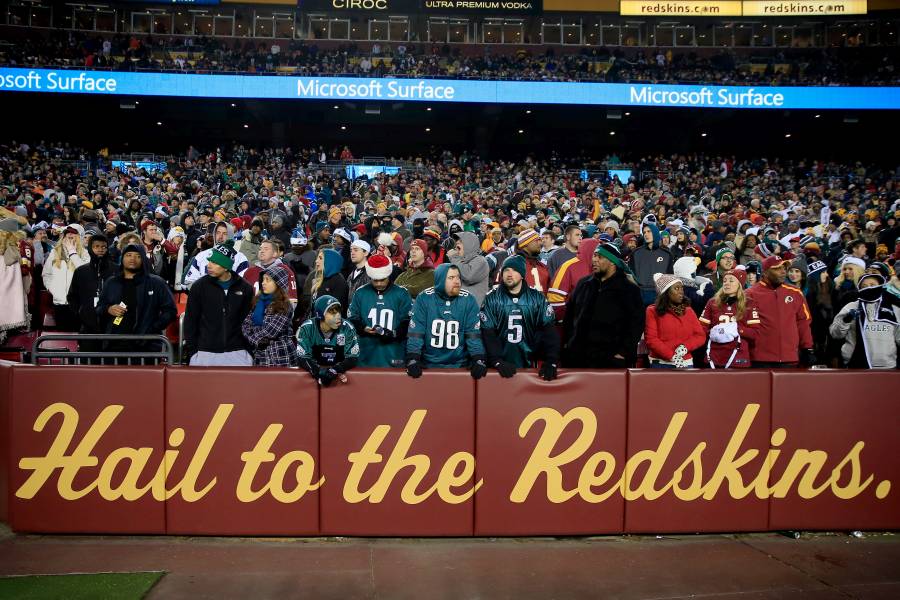 UPDATE: If a local sports host is to be believed, you may soon be watching the Washington Warriors. The Team 980’s Kevin Sheehan said he had it on “pretty good authority” Warriors would likely replace Redskins. Fan website Hogs Heaven adds that’s the favorite choice in “the clubhouse.” Naturally, some activists are already trying to shoot the name down. Stay tuned.

Former Washington Redskins offensive line coach Joe Bugel passed away the other day. He’s the beloved coach responsible for shaping the beefy and unmatched offensive line of the 1980s known as The Hogs. (Today he’d be run out of town for fat shaming.)

It’s appropriate to mourn. I open with a memory from the glory days of the Washington Redskins. For my generation of DC area fans, the name “Redskins” evokes something glorious, something unifying. Nothing, and I mean nothing, unified Washington, DC, like the Redskins. Urban blacks, suburban whites. Republican, Democrat. The day laborer on 14th Street, the lobbyist on K Street. The grey-haired Capitol Hill power broker, the shaggy haired Oxon Hill teenager. The Redskins name was stickered on Cadillac and hot dog cart alike. The only two colors that mattered were burgundy and gold. The Redskins did that.

When home and I see the Redskin bumper stickers — or pennants or flags or golf bags — I still get emotional. Even if I don’t particularly follow the Skins anymore. Even if, horror to say, I pay more attention to the Cowboys. I see the name, and I’m struck with a sense memory. Tens of thousands roar again around me at RFK as the Redskins defeat Minnesota in the NFC finals. I feel the worn wool Redskins cap pulled over my head. Then the shaking of my girlfriend’s house near the DC line when we beat the Cowboys in 1982 to advance to the Super Bowl. I hear the footsteps, sense the motion, of my dad pacing back and forth during games, too nervous to watch. Pausing just long enough to share intricacies of the game.

I remember clinging to my Redskins fandom after he died.

How can I ever thank the Redskins for what they brought to me and their other fans?

The Pressure to Change the Name

Today, once again, enormous pressure is on owner Dan Snyder to change the name of the team. “Redskins” is offensive to Native Americans, we are told. Just four years ago, the Washington Post did a survey. To its grave disappointment, it discovered that 90% of Native Americans were not offended by the name.

All for the same reason rich liberal white kids can scream at black police officers that “they are part of the problem” and uneducated “black Judases.” Or want to tear down the Emancipation Statue. And shout down black historians trying to explain the statue’s history. The facts don’t matter.

The pressure on Snyder ratcheted up Thursday. Fed Ex, which bought the naming rights to the stadium where the Redskins play, announced they want Snyder to absolutely positively change the name.

Nike has pulled all Redskins merchandise. The company’s conscience is untroubled by … China.  It does business there hand over fist, ignoring the enslavement of the Uighur Muslims.  The US just seized 13 tons of human hair taken from the Muslims interned in China’s camps. So for Nike, wigs made out of the hair of people enslaved right now because of their beliefs is fine. T-shirts celebrating a 90-year-old football team are not. Call Nike’s China cash what it is: “blood money.” (Maybe the company would be happier if the team were renamed something harmless that nobody seems to care about. How about “The Dead Uighurs”?)

Making the Redskins pay was behind Obama’s 2015 move to target the team. He went after the Redskins almost as hard as his minions did Tea Party groups. (And far harder than urban violence. Or the grim quality of life in the First Nations.) He tried to strip the team of its trademark. And his Department of Interior voiced interest in blocking the team’s move back to DC.

Synder has been negotiating for years to bring the team back from Landover, Maryland to downtown. Good for the city. Good for the team. Great for fans. Fed Ex field stinks. The best proposed site is the location of the old RFK Stadium. The land’s owned by the National Park Service, which is part of the Interior Department. Even if President Trump doesn’t want to block a move, local officials don’t want the Redskins back unless the name is changed.

We know where this is heading. If Synder does not cave in, the NFL will try to strip him of the franchise. (Of course, most Redskins fans would celebrate that.)

But there’s breaking news this hour: Dan Synder has read the writing on the wall. The Redskin name may soon be no more.

This morning the Washington Redskins released a statement declaring they are conducting a “thorough review” of their name. Snyder said the study will take into account “not only the proud tradition and history of the franchise, but also input from our alumni, the organization, our sponsors, the National Football League and the local community it is proud to represent on and off the field.”

Funny, he doesn’t mention talking it over with First Nations leaders. They are the first people the Skins should be talking to. And should be the loudest voice. Oddly, he also doesn’t specifically mention the fans. Not that Snyder ever cared much about the fans. 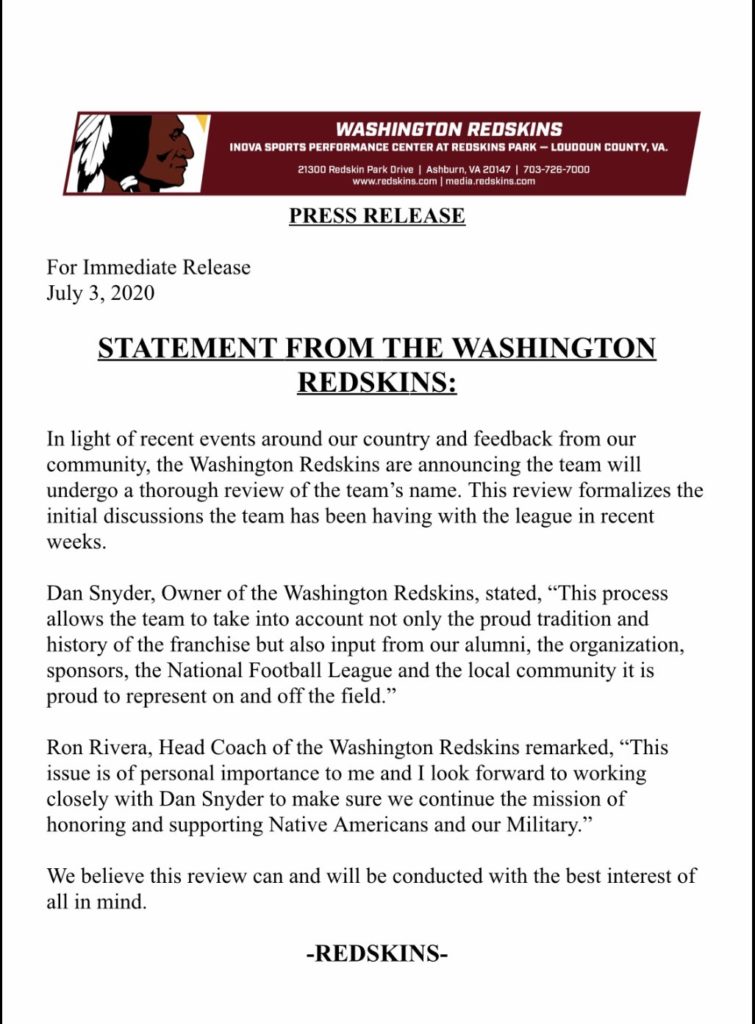 A New Name That Works?

However, I believe new coach Ron Rivera is hinting at a name change that will make most people happy; one I’ve been pondering since the controversy last arose in 2015.

Rivera said he looked “forward to working closely with Dan Snyder to make sure we continue the mission of honoring and supporting Native Americans and our Military.” (emphasis mine.)

So if it’s got to be done, let it be done. Let’s embrace a name that honors the team history, honors the Native American heritage, and honors their spiritual descendants who today bravely fight to protect this nation.

Let us put the Hogettes back in their dresses and pig noses, and sing the ol’ fight song. Sing it as a new song:

“Hail to the Warriors. Hail Victory.”

How the Cancel Culture Stifles Creativity

The Redskins are Officially No More