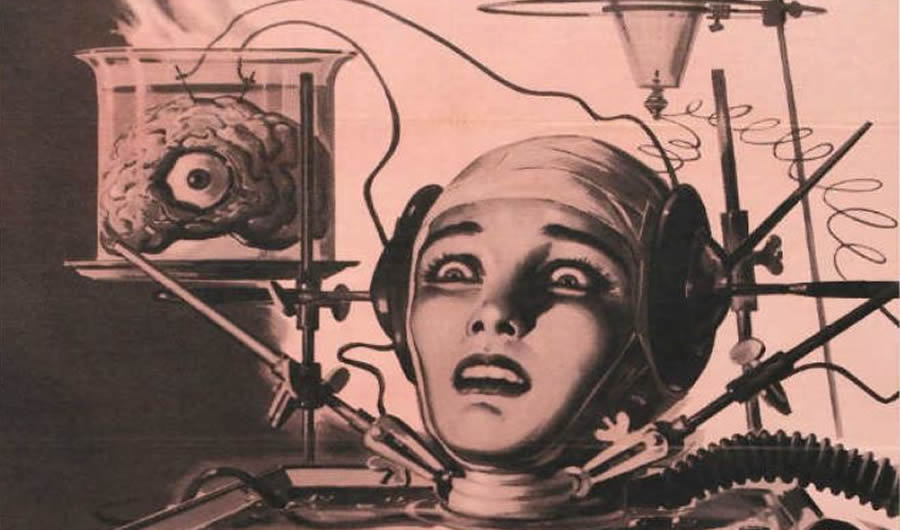 Poster from the 1962 horror film 'The Brain That Wouldn't Die.'

Italian transplant surgeon Dr Sergio Canavero wants to perform head transplants. He was recently interviewed by Barry Morgan on CJAD 800 Montreal Radio and said he was hoping to carry out the surgery in China, before the end of 2017.

He explained that when the spinal cord of a rat is cut, rather than crushed as in accidents, it could reconnect and function again. He described how he had performed a head transplant on a monkey in China, although the Chinese forced him to euthanize the monkey despite their very liberal approach to transplantation and medical research. He compared what he hoped to achieve as analogous to the mission of landing a man on the moon, which had also faced skepticism but had been successful.

The show’s producer, Matthew Gilmour, invited me to do a follow-up interview because, he said, CJAD had had so many negative responses from listeners to Dr Canavero’s interview that they thought further exploration of the issues was needed.

I believe the listeners’ negative reactions were what we call in ethics “the ethical yuck factor” or, more philosophically, “the wisdom of repugnance.” That reaction is mediated through our spontaneous feelings and intuitions when confronted with something that disturbs us ethically, often before we know exactly why we feel ethically disturbed. We ignore our feelings at our ethical peril, which does not mean they are always ethically valid, but they must always be examined if we want to avoid acting unethically.

Words matter and are not neutral in ethical decision making. Our choice of words affects our intuitions — especially moral intuitions — and our feelings, and intuition and emotions are among the faculties (the many “human ways of knowing”) that we need in “doing ethics” — working out what is and is not ethical.

Although it seems hard to explain, because both descriptions are of exactly the same procedure, I found the latter less ethically worrying than the former. Might that be because we are used to organ transplants and this is just a massive or complete “body organs transplant”? Barry Morgan’s question to me, “Don’t you think Stephen Hawking would want a body transplant?” directs our imaginations to the latter description of what’s involved.

Which raises the question: Who is the person? Is each of us an integral whole from birth to death — perhaps losing a few pieces along the way — or just a collection of replaceable parts (a modular theory of human identity)?

Are there analogous situations that have raised ethical concerns from which we could take lessons or gain insights?

We have accepted face transplants as ethical, but a head transplant is different in that it is much more central to our innate identity.

And we know that as we become familiar with a procedure our ethical concerns diminish, sometimes unjustifiably. The first human heart transplant was greeted with shock and in some cases horror, but is now a routine medical procedure.

Is transplanting an animal heart into a human being unethical? Would that be wrong in itself? We see using pig heart valves in human heart valve surgery as ethical.

Or are the ethical concerns about using animal organs in humans — xenotransplantation — not that it’s inherently wrong, but that the risks and harms are too great and the procedure is unsuccessful? What if the animal “donor” were genetically modified so some of the risks and harms to the organ recipient would be eliminated? But what if the main risk of xenotransplantation was the evolution of a new virus which could spread to the general population with a very remote risk of wiping out all human beings?

And is the goal of head transplants ethically relevant? Would life extension be ethical, but cosmetic surgery not?

Would transplanting a body of the opposite sex to a transgender person, one who feels trapped in a body of the wrong biological sex, be ethical? What about putting a human head on an animal body or vice versa? Would the value of individual autonomy, the right to choose for oneself so beloved of “progressives,” prevail? Such combinations have long existed in the human imagination — the sphinx a human-headed lion, Anubis the human-bodied jackal-headed Egyptian god. Mythology becoming reality. Science fiction becoming science fact.

We are once again on the Wild West frontier of post-modern medical science. It will be up to all of us and especially physicians, to ensure that ethics prevails over the megalomaniac dreams of cowboy transplant surgeons, such as Dr Canavero.

Margaret A. Somerville is Samuel Gale Professor of Law and the Founding Director of the Centre for Medicine, Ethics and Law at McGill University in Montreal.