Grateful for God’s Angels Along the Way 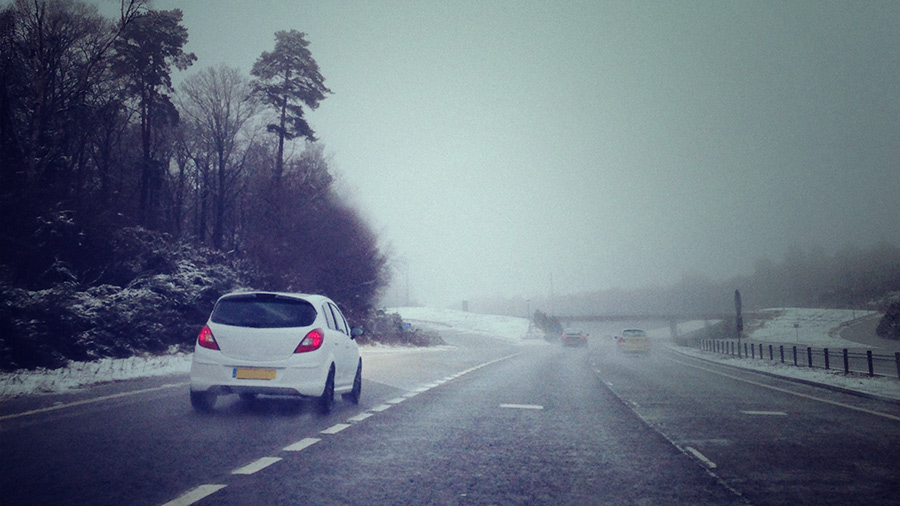 My wife and I were heading home to Ohio on Monday, following a family visit in east central Michigan. It was New Year’s Day, as you recall.

Like most of the rest of the country, Michigan was cold: The wind chill was 8° below zero. We were a hundred miles from anyone we knew, not far from Brighton, Michigan. Suddenly, with an ominous clunking noise, our Chevy Equinox slowed to 25 mph. A message on the dashboard warned us, “Engine Power Reduced” — as if we hadn’t noticed.

Sara was at the wheel. The engine kept running, but not so you could hear it. What we heard instead was the unique groaning sound that extremely cold snow makes when you drive on it, since she’d guided the car over to the unplowed shoulder of the expressway. I quickly started researching options on my cell phone. I got nowhere. The internet connection there was pokey as could be. And honestly, we knew there wouldn’t be any repair shops open on New Year’s Day anyway.

All Options Closed: What Do You Do?

But I’d noticed a sign for a Michigan State Police post at the next exit, so we rolled on in that direction. The car barely made it up the overpass, but we got there — and were thoroughly dismayed to find the police station was closed, too.

We made phone calls. Nowhere again.

What do you do when that happens? We weren’t about to walk anywhere. It was too darn cold out, and I was on crutches, recovering from a broken foot. And there wasn’t anyplace nearby to walk to anyway.

So what do you do? We prayed.

So again, what do you do? We prayed. We prayed the only prayer I knew to pray in a situation like that, in a lonely parking lot outside a locked police station. “God, would you please send us an angel?”

And about a minute later, a police officer rolled in. What do angels look like? This one was wearing a badge and a name tag reading “Jim.” Jim let us in to the warmth of the station, meeting our first desperate need. But that wasn’t all. He spent most of an hour with us researching tow trucks, Uber, taxis and repair shops. He wasn’t allowed to transport us himself.

What Jim, Sara and I found out, unfortunately, was that Brighton really closes down for New Year’s Day. Maybe it was because we were just north of Ann Arbor, and the Outback Bowl featuring Michigan’s football team was just about to get underway. Jim even had access to taxi companies’ back lines, and still no one answered.

So we prayed again. And we decided to try driving our car to the Courtyard Marriott, the nearest available hotel, 3 1/2 miles away. To our great surprise, it started and ran, sounding and acting nearly normal. Jim followed us there in his patrol car, ready to turn on his lights if we hit a slowdown or a complete breakdown. We arrived safe. I told him how thankful we were for his help. “It’s no big deal,” he said. “It was a big deal to us,” I answered.

Angels — Messengers from God —  Can Be Human, Too

What do angels look like? The word for “angel” in the Bible is the same as the word for “messenger.” Some of God’s messengers may be as human as you or me. I have no illusion that Jim was a literal celestial angel. Still, Sara and I are quite sure God sent him as an answer to prayer.

The same goes for the friendly people at the Buick dealership, who took our car in just as soon as they opened on Tuesday morning, who adjusted their work schedule to get us back on the road as quick as possible. It goes for Dean, the extremely encouraging fellow Christian running the dealership’s shuttle van, who transported us back to our hotel while they were working on the car, and who picked us up again when the repair was done, just a couple hours later.

And who knows what literal angels were guarding us while we were driving so slowly along the edge of the expressway?

We were back on the road by 1 p.m. Tuesday afternoon, and made it home to southwest Ohio in time for dinner. We were tired, for sure, but very grateful. Considering the weather and the kind of breakdown we’d had, we knew it could have gone much worse than it had.

We’ve seen God at work, time and time again. We know that He cares. We know He stands ready to answer prayer.

Nothing about our experience was provably “supernatural.” Jim’s arrival could have been a coincidence. The Buick dealer might have a standing policy of giving precedence to our kind of emergency. The staff at the Courtyard might always be that friendly.

But Sara and I didn’t need “proof” to know it was God who carried us through that hard time. We knew enough already to be confident of that. We’ve seen God at work, time and time again. We know that He cares. We know He stands ready to answer prayer. Sometimes I think He even lets us experience hard times, just so He can show us He’s there when we need Him most.

We’re both grateful to be home. We’re especially grateful that we know who to be grateful to: Jim the state policeman, the Courtyard Marriott, the people at Buick, the friends who gave us local advice — but most of all God, who showed Himself faithful again.

Where Does God Live?