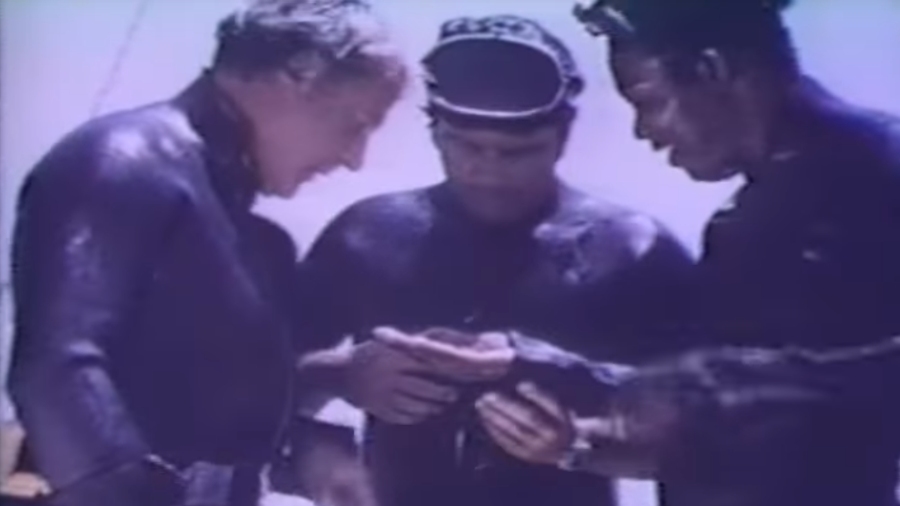 A 1971 Schlitz beer commercial depicting men diving for gold tells viewers these divers know what life really is, because "you’ve got to grab for all the gusto you can."

In the TV ad from 1971, scuba divers search for treasure — dangerous work, we’re told. Once they surface with some Spanish gold coins, they open cans of Schlitz beer. “You only go round once,” the narrator explains, “and you’ve got to grab for all the gusto you can.”

Strange, but Dante, deep in Hell, hears the same message.

The Familiar Message That Leads to Hell

Dante loved classical antiquity and placed the virtuous pagans just inside Hell (Inferno 4). It’s a place of sighing, not pain. The greats of antiquity are condemned to sigh eternally knowing that for all their virtue Heaven is closed to them for lack of faith.

Of course not all the pagans were virtuous and in canto 26, Dante meets Ulysses, also known as Odysseus, burning in a flame among other evil counselors.

In The Odyssey, Homer tells the story of how Ulysses, after conquering Troy, fought to get home to his kingdom, his father, son, and his wife, Penelope. It took ten years of harrowing adventures, but he finally made it.

In Inferno, we learn that, as [Odysseus] got older, he decided to abandon his kingdom, wife, and family.

In Inferno, we learn that, as he got older, he decided to abandon his kingdom, wife, and family. “Neither the sweet affection for my son / nor piety due my father nor the love / I owed Penelope to bring her joy / Could drive from me the burning to go forth / to gain experience of the world, and learn / of every human vice, and human worth” (26.94-99).

He and a small band sailed west to what we know as the Strait of Gibraltar, through which passage was forbidden. But Ulysses encouraged his crew, “From time so short in which to live and feel, / do not refuse experience of the lands / beyond the sun, the world where no one dwells.”

And so they sail into the forbidden ocean and after many days, “there appeared a mountain shore.” This was Mount Purgatory the first stop for blessed souls on their way to Heaven. No one arrives there without faith in Christ. A whirlwind arose then “the aft tipped in the air, the prow went down, / Until the ocean closed above our bones” (26.141-142). And Hell closed above their souls.

Chasing After Experience Because Life is Short

As Ulysses tells his tale, he makes it all sound exciting and noble. Grabbing life by the horns, daring to live life to the full, wanting to experience it all, willing to push boundaries, grabbing the gusto. Wouldn’t we put these on the list of great goods? Wasn’t Ulysses’ counsel good counsel rather than evil?

And so my colleague Dr. Jason Baxter asked his class of Wyoming Catholic College sophomores, “Should we have sympathy for Ulysses as he suffers in Hell?”

They’re not sure, but I am. He was an evil counselor in life and, even in Hell, he speaks evil counsel to Dante the pilgrim and to the reader. He deserves no sympathy whatsoever.

His evil counsel echoes through the ages not only in beer commercials, but in the actions of many, including many Christians.

I’ve Seen This Advice Play Out

Soon after their tenth anniversary, a friend left his wife, church, and faith. He had become an avid or possibly fanatical rock climber. Between the gusto of working at a high tech start-up, rock climbing every weekend, and his attractive, female rock climbing partner, he no longer had time for or interest in home, wife, and faith.

A pastor I know began casting about “to gain experience of the world, and learn / of every human vice, and human worth” after his children were grown. Soon he gave up his calling, children, and wife for extravagant living and a young mistress — now his wife — who is a couple of years older than his eldest daughter.

Two large homeschooling families lived next door to each other. Church friends admired both marriages and families as Christian ideals. That is until the mom from one family ran off with the dad from the other. When confronted, the runaway mom replied, “Don’t I have a right to be happy?” Vows? Responsibilities? Please. “My rights” and “my happiness” are the highest values. Ulysses would have understood and encouraged her.

Back to Inferno, I think Dante wants us to feel sympathy for Ulysses while reminding us of how God sees his counsel. Perfect justice set him afire in the circle of evil counselors. What more need be said?

There is always a siren singing sweetly in the distance, “There’s more to life. You can and should have it all. You have a right to be happy. Come away with me.” The songs are in the cultural air we breath, the ads we watch, the attitudes even in our churches, and we sympathize.

Dante, writing to his own time and culture, flashed the warning light. “Grab for the gusto and do as you please” is a sure route not only to shipwreck, but to perdition.

The Danger of Building Your Theology on a False Foundation