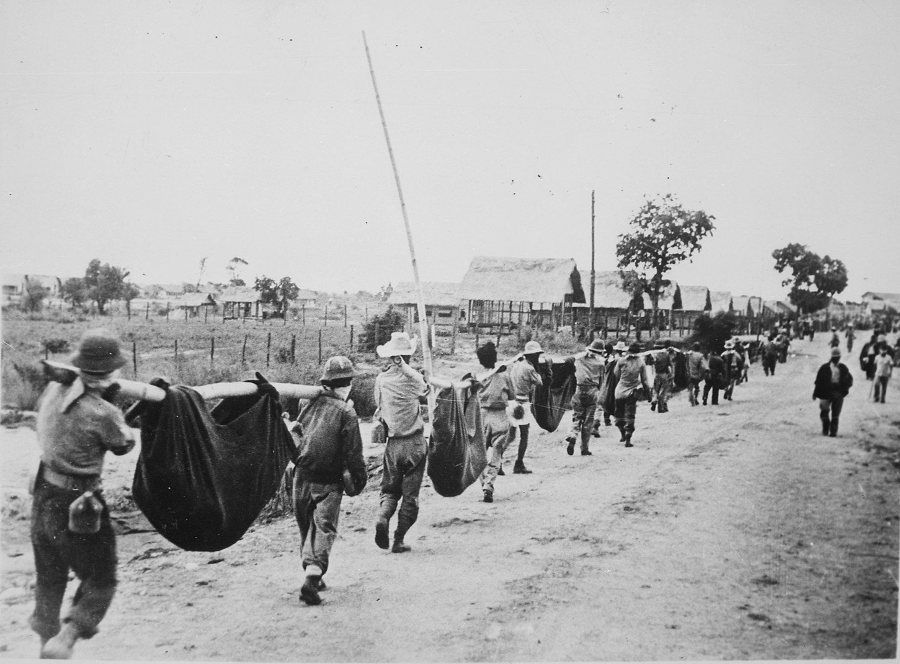 This picture, captured from the Japanese, shows American prisoners using improvised litters to carry those of their comrades who, from the lack of food or water on the march from Bataan, fell along the road. Philippines, May 1942.

Note: Our Tom Sileo is racing toward a hard deadline for another book while doing promotional work for his new best-seller Be Bold. So we won’t have his regular “Service & Sacrifice” feature this week. But we do have this inspirational story of a World War II military hero and survivor Tom surely would appreciate! You will too.

“I remember looking at the sky at dusk and thinking, ‘That sunset would look so pretty, if only the barbed wire weren’t there.'”

Lloyd Ponder, one of the last remaining prisoners of war from Bataan in World War II told Fox News that younger generations should see the silver lining in every hard situation. “I had a hard education in prison camps. You can die so easily. Yet where there’s determination, faith, and a will to live, you can overcome impossible odds.”

Ponder, 101, hails from Natchitoches, Louisiana. He was born October 12, 1921, the oldest of five brothers. Although he was a high school valedictorian, he had no money for college and enlisted in what was then the U.S. Army Air Corps, now the Air Force. He trained to become an airplane mechanic.

Part of the 116th Squadron, 27th Bombardment Group, Ponder arrived in Manila, Philippines, in 1941, a week before Pearl Harbor. During the war in the Philippines most of the airplanes were destroyed. Ponder then had to fight as an infantryman and supplies were cut off, he told Fox News.

“No One On Earth Can Help Me Now”

“We ate our horses. Small ponies were pretty good, but mules were tough to eat.” After a surrender order, and the fall of Bataan, his group was taken to POW camps in the infamous Bataan Death March. Despite suffering from malaria, Ponder escaped to Corregidor by night in a tugboat. He was able to fight with the U.S. Marines for a month until that island fell too.

“I was dog tired. Mentally worn out from continuous artillery shelling, probably at the lowest point of my entire life. I remember thinking, ‘No one on this earth can help me now. My life is in God’s hands.’”

He was in various POW camps for the next three and a half years, beaten and starved, at one point dropping to 90 pounds. In July 1944, he was transferred to Japan on an overcrowded rusted freighter. “They just kept cramming more men inside. All space was taken. Not a breath of air. No sanitation facilities. Wasn’t even possible for us all to sit. We were a mob — pushing, shoving, yelling.”

“Our Country Never Looked So Beautiful”

Finally, a year later, on August 15, 1945, Japan surrendered. Ponder sailed home a day before his 24th birthday. “I thought our country never looked so beautiful.”

The most important lesson he learned involved his faith. “I made a habit of daily prayer. When everything appeared hopeless, I’m certain God sustained me.”

Biden Leaves God Out of His National Day of Prayer Proclamation