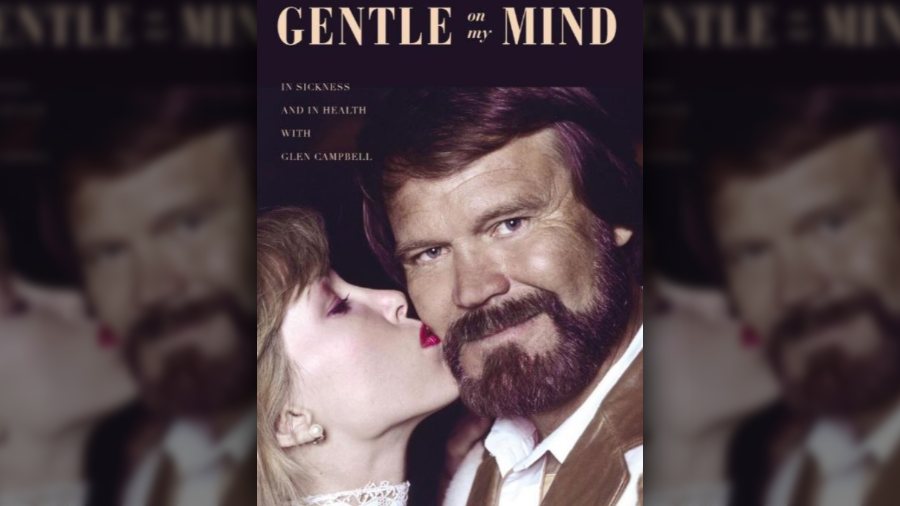 Even after his diagnosis, he went on to tour and perform his newly released and widely acclaimed 61st album, “Ghost on the Canvas.” He bravely led his life in the public eye, bringing awareness to the disease and the need for a cure.

Just shy of three years after Glen’s death from Alzheimer’s, his widow wrote Gentle on My Mind: In Sickness and in Health With Glen Campbell. In her new book, Kim Campbell describes her life with Glen, and how she and Glen fought through his alcoholism and drug addiction and then Alzheimer’s. She wrote the book because, while the documentary Glen Campbell: I’ll Be Me detailed Glen’s early and middle stages of Alzheimer’s, she wanted to reveal their journey through the later stages of the disease and tell how their faith saw them through it — to the end.

Faith as the Foundation

It was the knowledge of God revealed through Scripture that gave her what she needed to stay with Glen for 35 years, through the alcoholism, drug addiction, and then Alzheimer’s, she told The Stream. “Faith was was the foundation that Glen and I built our marriage on and it never failed us. I don’t think there’s anything that can make you closer as a married couple than to build your marriage on God’s Word. That’s what we did.”

When their three children were young, Kim and Glen read the Bible with them every night. As adults, their children honored and supported them when Alzheimer’s turned their world upside down. Kim and Glen began to experience anew the faithfulness of God. “God is faithful even when we are not. He sees our pain, He knows what we are going through. … He knows our future. He knows what we’re going to need when the time comes and He loves us and He cares for us and He will provide.”

Before Glen’s diagnosis, Kim got frustrated with some things that Glen did. He repeated himself incessantly. “When we got the diagnosis, God filled me with compassion and gave me the patience and the strength I needed as the disease progressed.”

“Good,” Kim told him. “That means you can live with it. Play music. Play golf. Have fun. Our life will be beautiful. We’ll be closer than ever.”

Each day Kim prayed with gratitude. “Thank you, God, for allowing me to honor my husband in the most meaningful way possible, to love him in sickness and in health.”

In the beginning stages, Glen enjoyed performing on stage with his musician children, as illustrated in the award-winning documentary Glen Campbell: I’ll Be Me. Although he would forget lyrics and needed a teleprompter to sing his songs, he was still able to play the guitar flawlessly. As time went on however, he began to repeat himself and became increasingly agitated and disoriented. Eventually everyone knew “The Goodbye Tour” was over.

After the tour ended, Glen experienced new symptoms of Alzheimer’s. He lost the ability to understand language or communicate verbally. He became combative. Kim frequently found herself on the other end of a punch — and one time, a knife.

“I tried to keep my sense of humor. I mean, it was kind of comical to find myself running, leaping, and dodging punches, but then again, it really wasn’t funny at all to find my beautiful husband swinging at me. I realized he didn’t know what he was doing, it was just kind of like an instinct. ‘You’re doing something I don’t like. And I can’t find the words to make you stop. So I’m just going to swing at you.'”

I’m Not Gonna Miss You

Glen and his producer, Julian Raymond, wrote a song for Kim, which was featured in the documentary. It was nominated for a Grammy and an Oscar. Julian asked Glen what it was like to have Alzheimer’s and to lose his memory. He put Glen’s thoughts to music.

For Kim, the song was a beautiful gift. “I think Glen was saying, ‘Don’t worry about me. You’re the one who will shed the tears and bear the pain and the sorrow.'” “I’m Not Gonna Miss You” went on to win a Grammy for best song and was nominated for an Oscar.

The time came when Glen’s doctor suggested that Kim should not be trying to care for Glen at home. She was filled with fear. She had vowed she would never place Glen in a nursing home. Then she visited memory support communities, which were very different. “I was amazed at how wonderful they were.”

She doesn’t say she placed Glen in a facility. “I say our family joined a memory care community. It was my community too. I became friends with other women who had husbands there and we laughed together, cried together, prayed together, supported each other through the rest of our journey. No one knows what you’re going through, unless they’re walking in the same shoes, you know? And so it was a big comfort to me and to our entire family to be a part of a good memory care community.”

A stigma about long-term care prevents people from getting the care that they need. Kim wants to change that. She hopes readers of her book will learn that they can get help. “You don’t have to go through it alone,” she says.

Kim points to support groups and sites like The Alzheimer’s Association that provide information and point to other resources. Memory “support” or “care” communities offer quality care in a safe, secure environment with 24-7 medical care.”

While Glen was in the memory care community, Kim helped form a support group for spouses of people with Alzheimer’s. At first the meetings were sad. “People were sitting there crying and exhausted. And I thought, ‘You know, we’re becoming the second victims of this disease. I’ve got to do something.’ So I started a blog called ‘Care Living.org’ to encourage caregivers to take care of themselves while they care for the ones they love.” All of the articles on the site are meant to uplift and inspire.

She also started the Kim and Glen Campbell Foundation to advance the use of music as medicine. “When you listen to different types of music, your brain actually produces some of the same chemicals found in antidepressants and sedatives, like prolactin, the comforting hormone found in breast milk, oxytocin and serotonin. And music is very therapeutic. If it can reduce the use of drugs to manage behaviors, then it’s a much better approach.” In 2018, they awarded their first research grant to musician, neuroscientist and author of New York Time’s best seller This Is Your Brain On Music. It will help Dr. Daniel J. Levitin work on cognitive impairment, and embodied cognition in relation to music.

Kim is now working on a project to develop a music and movement program that’s COVID friendly for seniors who are at risk. It will help those stuck in their homes, or living in assisted living or memory care communities.

“It’s not specific to memory loss,” Kim explains. “It could be just for people that live in senior living communities where they’re trying to restrict the amount of people coming and going. But they need exercise. They need music. They need different kinds of therapy.” She’s working with experts on how to best develop that program.

On August 8, 2017, Glen went to be with the Lord. “Glen was finally free. I also reaffirmed my belief that God’s mysterious wonders are without end. Life is without end. Having defeated death, Christ has allowed us to quell our fear of death. Having risen from the grave, Christ has assured us that life is eternal.”

“I have cried and I have laughed,” Glen said once. “And laughing is a [whole] lot better.” Even while he struggled with Alzheimer’s, Glen kept laughing and joking as long as he could.

“This disease has taught me to make whatever beautiful memories there are to make,” Kim writes. “Cherish every moment when body and soul are singing in harmony. Accept each invitation to dance. Love extravagantly.”