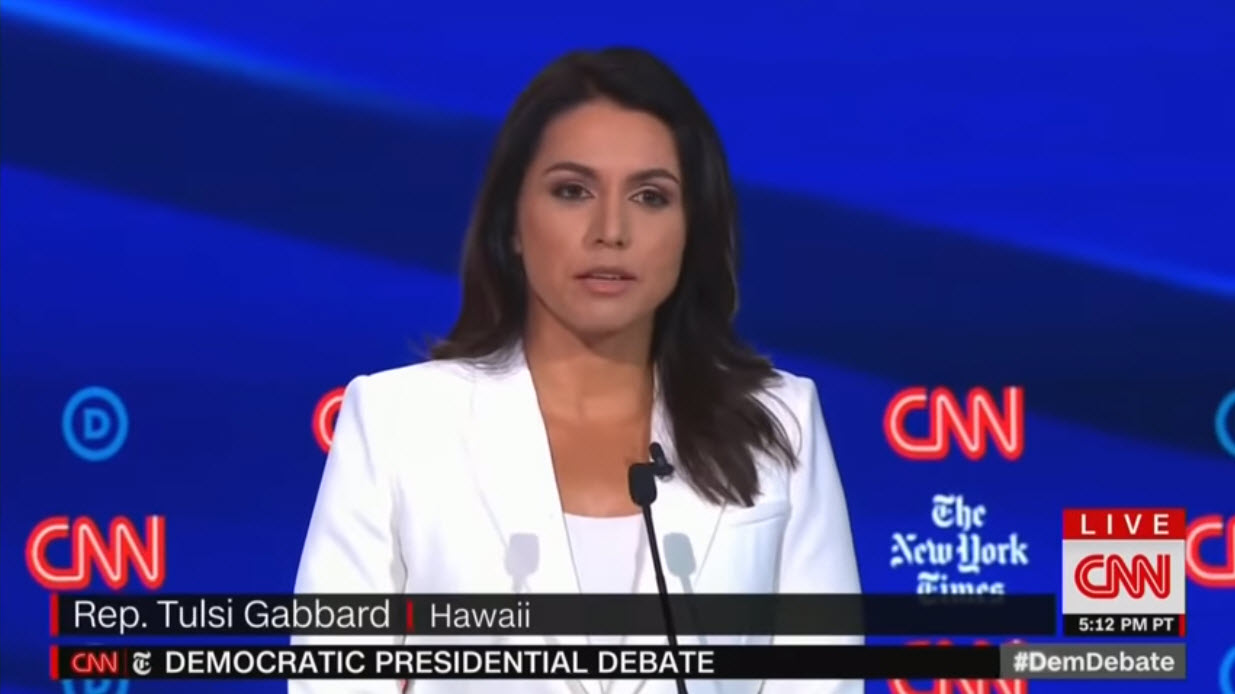 Opening statements consisted of moderators asking the 12 Democrats on stage about their thoughts regarding impeaching the president after the House of Representatives opened an official inquiry Sept. 24. Many of the candidates spoke in favor of impeachment, and while Gabbard noted she supports the inquiry, she was one of a few who added in the possible repercussions, appearing subdued about the idea.

“If impeachment is driven by these hyper-partisan interests, it will only further divide a terribly divided country,” Gabbard said during opening statements in Ohio. “Unfortunately, this is what we have already seen play out as calls for impeachment really began shortly after Trump won his election. As unhappy as that may make us as Democrats, he won that election in 2016.”

“The serious issues that have been raised around this phone call that he had with the president of Ukraine and many other things that transpired around that are what caused me to support the inquiry in the House,” Gabbard continued. “And I think that it should continue to play its course out to gather all the information, provide that to the American people, recognizing that that is the only way forward.”

The Hawaii representative added to her opening statements about impeachment dividing the country, noting that if the Senate doesn’t end up impeaching the president, he will feel “exonerated.” This will further deepen “the divides in this country,” Gabbard said.

“If the House votes to impeach, the Senate does not vote to remove Donald Trump, he walks out and he feels exonerated, further deepening the divides in this country that we cannot afford,” she said.

Businessman Andrew Yang also did not appear to be as aggressive in his support of Trump’s impeachment. He said he supports the inquiry, but noted that Trump got elected in the first place partially because he won Ohio in 2016. He added in that when Democrats are talking about Trump, “we are losing.”

“Why did Donald Trump win your state by 8 points? Because we got rid of 300,000 manufacturing jobs in your towns,” Yang said. “And we are not stopping there. How many of you have noticed stores closing where you work and live here in Ohio? Raise your hands. It’s not just you. Amazon alone is closing 30% of America’s stores and malls, soaking up $20 billion in business while paying zero in taxes.”

“These are the problems got Donald Trump elected … That is going to accelerate and grow more serious regardless of who is in the Oval Office. The fact is, Donald Trump, when we’re talking about him, we are losing. We need to present a new vision, and that even includes talking about impeaching Donald Trump.”