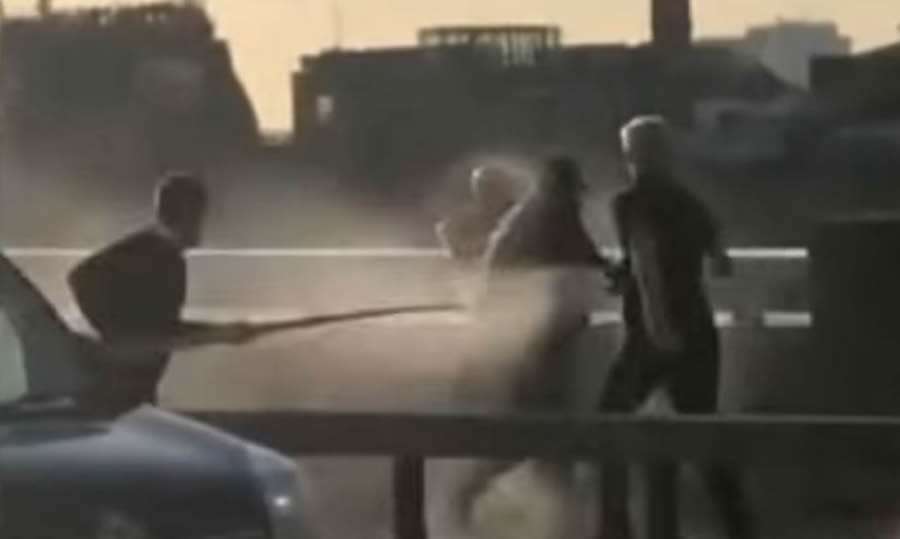 Some events come to represent whole eras of history. They embody the spirit of the times and prophesy the shape of things to come. John F. Kennedy’s promise to “send a man to the moon in this decade.” Jimmy Carter hopelessly overpowered by a killer jackrabbit.

The West just witnessed another epoch-defining event: The London Bridge terror attack over Thanksgiving weekend, when a knife-wielding Islamic terrorist was subdued by men armed only with fire extinguishers and a narwhal tusk. Unfortunately, what marks this episode is not its heroism. It is its helplessness.

The Wrath of Khan

The assailant, 28-year-old Usman Khan, was the UK-born son of Pakistani immigrants. He had already been convicted for terrorism with eight other members of a terror cell inspired by al-Qaeda. But he soon learned how to work within the system. Just months after his conviction, he wrote the authorities that he was now “much more mature and want to live my life as a good Muslim and also a good citizen of Britain.” An appeals judge ruled Khan exaggerated his plans as a way of “bigging up” his terrorist credentials. He commuted Khan’s “indeterminate” sentence to 16 years, which made Khan eligible for automatic release, without a parole board hearing, last December.

Khan completed two programs to deradicalize Islamist terrorists. He was attending a conference for the prisoner rehabilitation when he threatened to blow up Fishmongers’ Hall.

Khan murdered two of the conference organizers — 25-year-old James Merritt and 23-year-old Saskia Jones. A Polish chef, Lukasz Koczocik, heard the racket and grabbed a long stick off a nearby wall. Although Khan slashed him five times, he held Khan at bay while another bystander grabbed a narwhal tusk and a third sprayed Khan with a fire extinguisher. After they drove him onto London Bridge, a plainclothes policeman grabbed Khan’s knife. Two passing tour guides entered the fray. Eventually, London police arrived and shot the terrorist.

Observers outside the UK obsessed over the makeshift weapons. The blue-checkmark brigade found the “narwhal tusk” hilarious. “All I want for Christmas is a narwhal tusk and a fire extinguisher,” cracked CNN’s house “Republican” Ana Navarro-Cárdenas. NARAL President Ilyse Hogue even found hope that “when a society is not armed to the teeth, terrorists can be stopped with a narwhal tusk and a couple fire extinguishers.”

When a society is not armed to the teeth, terrorists can be stopped with a narwhal tusk and a couple fire extinguishers. https://t.co/e2DMYtqOUm

It’s nice to see NARAL oppose a man threatening innocent people with sharp instruments for once. But Hogue’s take stands reality on its head. The sight of besieged civilians fighting off a native-born Islamic terrorist with a tusk could be the face of the West’s future.

To give everyone a clear mental picture, here is video footage of the scene:

The Tip of the Spear

The London Bridge attack occurred where the West’s self-doubt and unilateral disarmament met the bold conquest of extreme fundamentalist Islam.

Take the aspect that caught everyone’s attention: the narwhal tusk. It is one of the few means of self-defense the British government hasn’t gotten around to outlawing. “The UK has some of the toughest gun control laws in the world,” the BBC reported. Gun control brought a surge in knife violence, so now carrying a knife that is too long, or the wrong design, is punishable by four years in prison and an “unlimited” fine. The UK bans citizens from carrying mace, pepper spray, air guns, and stun guns. The British people are so powerless that it took a half-dozen people to restrain a lone terrorist with two knives.

While the UK government distrusts law-abiding citizens, it has undeserved faith in its criminal population. Khan benefited from a Labour Party law, which automatically frees most prisoners once they’ve served half their sentence. His first two victims were two young, starry-eyed devotees of “social justice.”

Yet Labour Party leader Jeremy Corbyn, who makes Bernie Sanders look like Bob Dole, has said he still believes terrorists should “not necessarily” serve their full sentences. Prime Minister Boris Johnson promised to repeal the law but received stiff opposition from Merritt’s father, Dave, who wrote in the Guardian that his son “would be seething at his death, and his life, being used to perpetuate an agenda of hate.” (Apparently, demanding terrorist masterminds serve their sentences is now “hate.”)

The West has disarmed itself — literally and figuratively — in the face of murderous ideologies. “Europe today has little desire to reproduce itself, fight for itself or even take its own side in an argument,” wrote Douglas Murray in The Strange Death of Europe. “Those in power seem persuaded that it would not matter if the people and culture of Europe were lost to the world.”

The West built its unique culture of liberty on the bedrock of the Christian faith and Judeo-Christian principles. Today, more people in England and Wales say they have no religion than call themselves Christians. Brits, and Western Europeans generally, believe all religions are essentially alike — Christians, Jews, Muslims, Sikhs. They have removed the stumbling-block of faith in Christ and replaced it with vague talk of “European values.”

If you believe the West is uniquely evil, and you view all religions as basically the same, it makes sense to allow an unassimilated group of Islamist extremists to grow in your midst. They are victims; you are righting past imperial wrongs.

Not the Same Bargain

But fundamentalist Islam has not made this same bargain. Islamists believe their religion alone is true and must form the basis of society for all, believers and infidels alike.

The 2019 London Bridge attack took place at the intersection of a myriad of policies that show the West’s lack of confidence in itself. Those policies include denying their citizens any form of self-defense while maximizing prisoners’ rights, losing sovereignty over its immigration laws, turning a blind eye to a hostile religio-political extremism, and a prevailing hostility to its own institutions and culture. It has uniquely demonized its own history (blithely unaware that self-reflection and acts of penance and atonement are distinctive marks of Western civilization). It has equalized all truth claims — and assumed everyone else shares our indifference about ultimate things. Without a new era of cultural self-confidence, this terrorist attack provides a glimpse into the future of a faithless, graying Europe, slowing losing the battle for its own survival.

Thankfully, the UK still produces — and attracts — fearless men (trigger the feminist backlash) with enough toxic masculinity to turn everyday objects into weapons. It is particularly fitting that one of the heroes is from Poland, a traditional country where President Donald Trump boldly defended true Western values. And whose president plans to give Koczocik a medal for “sacrifice and courage.”

The light shines from the East, a ray of hope for those who still believe the West is a force for good and deserves defending. And self-confidence must come through a rebirth of the faith that founded the West.

Rev. Ben Johnson (@therightswriter) is managing editor of the Acton Institute‘s flagship publication, Religion & Liberty, and edits its transatlantic website. He is an Eastern Orthodox priest and the author of three books. His views are his own.