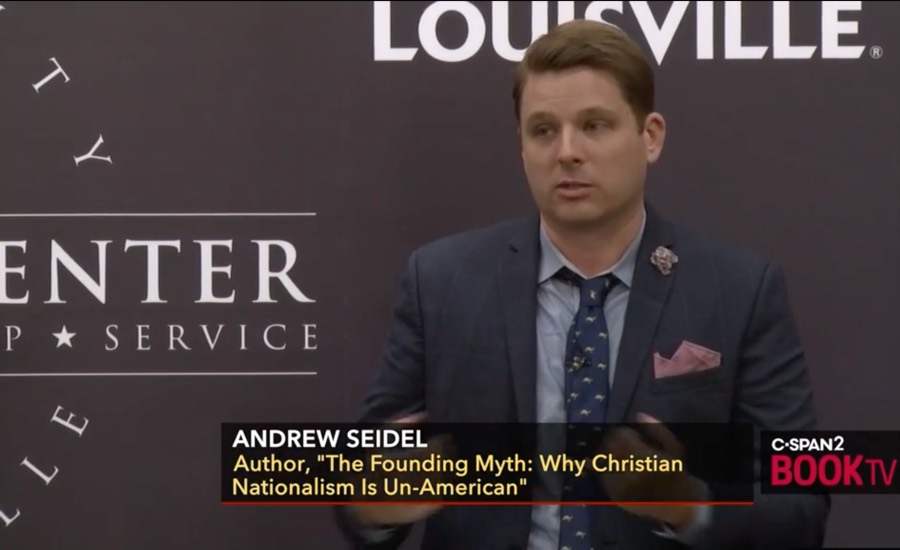 Andrew Seidel, attorney with the influential anti-Christian Freedom from Religion Foundation, showed up on C-SPAN Saturday night claiming Christianity is opposed to personal responsibility. He was on a Book TV debate with Mark David Hall on the role Christianity played in America’s founding. I must admit I didn’t hear all of Hall’s comments; I was too astonished at Seidel’s.

“We were not founded on Christian principles,” Seidel said, “and it’s a good thing, because those principles are fundamentally opposed to those principles on which this nation was built.” (Find it at 27:47 here.)

Oversimplifying Slavery to Support His Bias

Take slavery, for example. He says the slave-holders had “better biblical arguments” than the abolitionists; or in other words, they were more biblical.

I guess he never heard of the fundamental biblical argument that all persons are created in God’s image. Or the command against enslavement in 1 Tim. 1:10. I suppose he’s ignorant of the fact that slavery has never been abolished in any major human society except under Christianity’s strong influence.

There’s more to be said on slavery in the Bible (see here, for example), so I wouldn’t want to present it simply as, “The Bible took care of the slavery problem.” It’s much more socially and historically complex than that. But it’s also way more socially and historically complex than the caricature Seidel tries to fob off on us. He’s cherry-picked his facts to support his oversimplified bias.

But then there are those points on which he isn’t merely oversimplifying, he’s just flat wrong. Wrong, and culpably so. For it’s one thing not to know what one is talking about; it’s another to pretend one knows what one is talking about, and spout error and ignorance regardless. It’s even worse to engage in public policy advocacy based on total disregard for truth — especially truth that sits right at the core of what one seeks to oppose.

But this is exactly what Seidel does with Christianity’s central doctrine. At 29:45 he complains of Christianity’s so-called “Repudiations of personal responsibility.” Example one, for Seidel: “Jesus dying for our sins … His punishment somehow absolves others of their wrongdoing. This is the central idea of Christianity, that Jesus died for your sins. It is a complete abrogation of personal responsibility that is fundamentally at odds with our democratic, legal, and financial systems.”

How does he get away with this nonsense?

This is so wrong it’s dumbfounding. Yes, Christ’s work on the cross relieves us of the eternal guilt for our sins, and the consequences that come with it. It allows for the freedom that comes with forgiveness.

But Seidel doesn’t just get his biblical theology wrong. His error is so much more obvious than that!

If there were any truth to it, there ought to be some shred of evidence that Christians down through history have failed to take responsibility for themselves — or for others. And there is no such evidence. Quite the opposite, actually.

Let’s start with the obvious. I mean the really obvious. How do Christians spend our Sunday mornings? We gather in assembly with other Christians for instruction on how to live better lives. (That’s just my re-wording of, “We go to church and hear sermons.”) Does this look like a people who shirk responsibility?

And it has been this way from the very first days of Christianity. The Acts and the Epistles are filled with calls to personal responsibility, and with examples to demonstrate it. If the Cross meant shirking responsibility, someone should have told the people who first preached it!

Did I Mention ‘Obvious’?

But there’s far more evidence that Seidel is wrong; and I mean evidence absolutely no one could fail to notice. (I’ve used this approach before, but it bears repeating.)

I don’t know where Seidel lives now, but he’s studied in New Orleans and Denver. Now, New Orleans has hospitals named St. Charles, St. Luke’s, and St. Catherine. Denver has St. Anthony, St. Joseph, and Porter Adventist Hospital. It takes no special investigation to discover these were founded as Christian institutions. How did he not notice this? Does this sound like a failure to take personal responsibility?

But there’s far more evidence that Seidel is wrong; and I mean evidence absolutely no one could fail to notice.

No historian calls it that anymore, simply because there was little dark about it. Or perhaps there was in the first centuries following the fall of Rome, but it was in fact the Christians who were most responsible for preserving classical knowledge from barbarians’ literal rampaging. Seidel has his history exactly upside down there.

How Does He Get Away With It?

So you might ask, is he that completely wrong? Isn’t it at least possible to view Christ’s forgiveness as “repudiating personal responsibility”? Sure — if you ignore almost everything ever said about it, in context of actual Christian teaching. Is it likewise possible to say that Christianity has ever repudiated personal responsibility on the grounds of Jesus’ atonement? No. Seidel could hardly be more wrong than that. More obviously wrong.

So what I want to know is, how does he get away with this nonsense? Why does anyone even listen to him? Seidel’s Amazon bio says he’s appeared on MSNBC, Fox News, and countless local news stations.” He has written for multiple publications including Slate and Religion News Service.

And I’m willing to bet he’s never bothered to represent Christianity accurately in any of those venues.

One who speaks against Christianity ought to bother finding out what Christians think and how Christians act in the world. Seidel owes it to his own intellectual integrity to do so, if nothing else.

In fact, since he claims to care about it, he really ought to take personal responsibility here — responsibility, that is, for telling the truth.