The Eubank family travels into war zones in Burma and Iraq, fighting to bring hope and help to those in need. 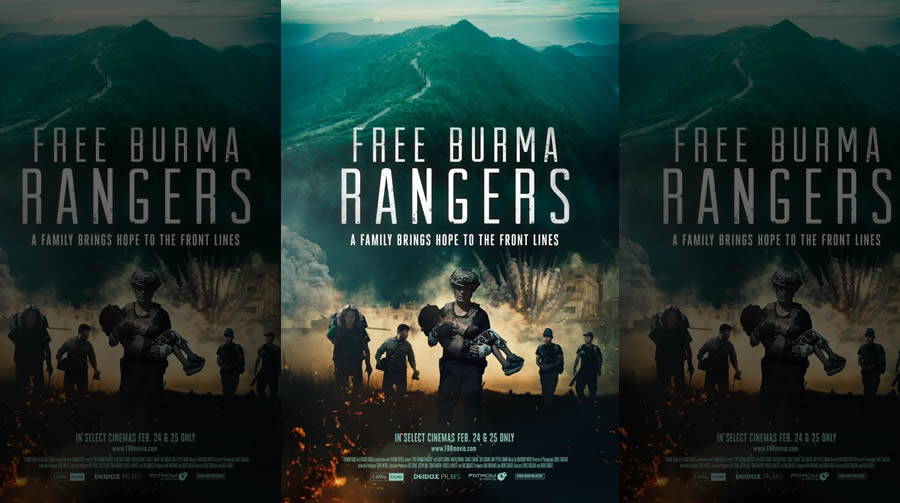 The wind whips up the dust into a frenzied cloud. Allies drop smoke bombs, shielding the men from ISIS fighters. A tank leads the way.

Dave Eubank, in full combat gear but unarmed, rushes across the road into the smoke as bullets hit the ground all around him in little puffs of dust. “Jesus help me!” He grabs a tiny girl with pigtails, hiding in her dead mother’s burqa. He runs with her in his arms, back through the smoke and to safety.

Free Burma Rangers isn’t the latest Hollywood action film. It’s an incredible true story, captured on film by a camera crew following a missionary family as they risk everything to follow Jesus. The film had a limited two-day release in theaters February 24-25. It is now available on Vimeo On-Demand and Christian Cinema.

Free Burma Rangers is produced by Deidox Films in partnership with LifeWay Films. Former pastor Francis Chan and his wife, Lisa, are among the executive producers.

On the Front Lines

The documentary follows Eubank, his wife Karen, and their three children as they minister to and fight to protect internally displaced people — first in Burma (now Myanmar) and then in Iraq.

It juxtaposes film of the Eubank children climbing trees, riding horses and learning to swim in the river with images of IED explosions and bodies of the dead lying on a dirt road. The film exposes the frailty of life and the importance of bringing the love of Jesus to a lost world while there’s still time.

Free Burma Rangers takes its name from the group of fighters Eubank founded when he arrived in Burma to do relief work over 20 years ago. He and his family provide medical supplies and assistance. “As we did these relief missions, more and more ethnic people began to join us,” he said in the documentary. A former U.S. Special Forces Captain, he’s trained ordinary Burmese to fight in the decades-long civil war as the country’s military attacked their own people.

Several of those Eubank trained followed him to Iraq when he announced that God wanted his family to help the displaced people there. Much of the film centers around the family’s time in Mosul, as Eubank and the Rangers helped terrified Iraqis escape the ISIS-controlled area.

Free Burma Rangers is a film about a missionary family who follows Jesus at a cost most would not consider. Eubank will go where God leads — even to the front lines of war. The film gives an honest, raw look at the conflicts in Burma and Iraq. It shows how deeply the people in the areas need help and the hope that only Jesus provides.

Friends get shot and die. At other times strangers are saved from certain death. Through it all, a spirit of love, Christian unity and forgiveness permeate the film. “The antidote to evil is love.” Eubank says that’s the most important lesson he’s learned in the past 25 years.

He says that all people have something others can learn from. “Everywhere, every person in the world has something good and wonderful that we can love, learn from and build up and stand together against evil. And help people who are oppressed. I want that story to be told.”