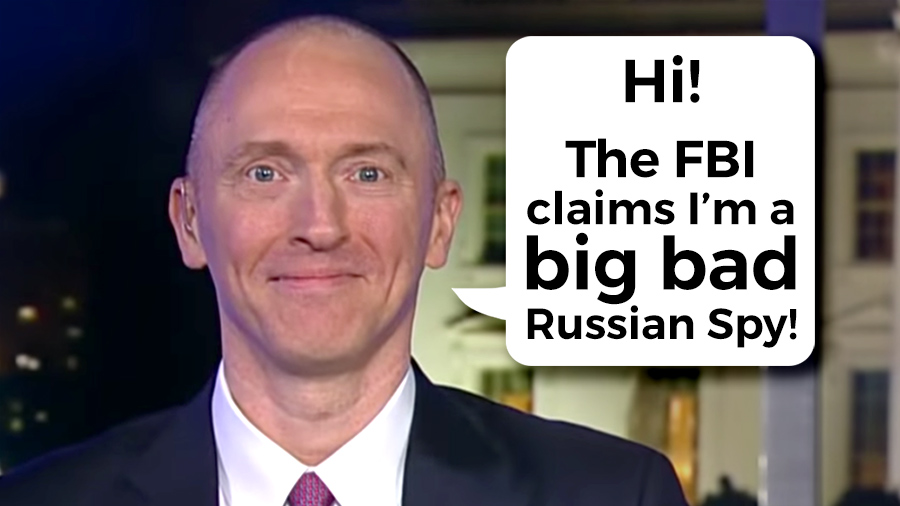 Lady Justice is finally getting off her tush. U.S. Attorney John Durham has his first conviction in the Trump Russia hoax.

A former FBI lawyer neck deep in Russiagate will be pleading guilty to his role in framing former Trump advisor Carter Page in order to get a FISA warrant to spy on the Trump campaign.

Kevin Clinesmith, the DOJ Inspector General found, had falsified an email from a U.S. government agency (believed to be the CIA) to say Page was “not a source” of an intelligence agency when the email originally noted Page was their source. As Fox News reports, “The DOJ relied on that assertion as it submitted a third and final renewal application in 2017 to eavesdrop on Page under the Foreign Intelligence Surveillance Act.”

[o]mitted Page’s prior relationship with another U.S. government agency, despite being reminded by the other agency in June 2017, prior to the filing of the final [FISA warrant] renewal application, about Page’s past status with that other agency.

On those FISA warrants, James Comey’s FBI painted Page as an active Russian agent, when in fact he was working for the U.S. government in cases against Russia.

On the basis of those warrants, the FBI was able to intercept all of Page’s past and ongoing communications and that of anyone he’d been in contact with. In other words, the Trump campaign.

Just an Innocent Mistake? Sure.

Clinesmith is expected to plead guilty to a single count of making a false statement. Amazingly, Clinesmith holds that it was an innocent mistake.

“Kevin deeply regrets having altered the email,” Mr. Clinesmith’s lawyer, Justin Shur, said in a statement. “It was never his intent to mislead the court or his colleagues as he believed the information he relayed was accurate. But Kevin understands what he did was wrong and accepts responsibility.”

The New York Times seems happy with Clinesmith’s explanation, and are quick to note: “Prosecutors did not reveal any evidence in charging documents that show Mr. Clinesmith’s actions were part of any broader conspiracy to undermine Mr. Trump.” (They go on to completely mischaracterize the brutal findings of the IG investigation, the biased conclusions of the Mueller investigation, and the extensive arguments of Trump supporters. But that’s to be expected from NYT at this point, especially given their key role in spreading the Trump Russia Hoax to begin with.)

Let’s refresh. An FBI lawyer doctored an email to turn someone who was a CIA source into someone who wasn’t a source. He changed a “yes” to a “no.” He fabricated evidence against a member of the Trump campaign.

This was no fresh scrubbed rookie lawyer. As Sean Davis at The Federalist points out, Clinesmith was a “top attorney in the Federal Bureau of Investigation’s Office of General Counsel (OGC) and a key agency attorney under fired former FBI Director James Comey.”

Clinesmith is also hostile toward Trump. A member of the “resistance.” Clinesmith was “devastated” by Trump’s win, he declared in an text with fellow FBI lawyer Sally Moyer. As Davis reports, Moyer then wondered if the win would change his mind about staying with the bureau.

Will There Be More to Come?

As much as the New York Times would like to dream, the case does not start and end with Clinesmith’s act of “resistance.”

Clinesmith’s sabotage of Page came five months after the FBI had determined they could not verify any of the information in the Steele Dossier, including its allegations against Page. Five months after determining there was zero evidence of any collusion between Russia and anyone on the Trump team. Right around the time, Steele’s subsource testified Steele’s information was just rumor, wild speculation and likely Russian disinformation.

In other words, the FISA abuse didn’t start, nor did it end, with Clinesmith. The effort to sabotage then overthrow Trump did not begin with the FISA abuse or end with it.

Last night on Fox News, U.S. Attorney General William Barr teased there would be a development today, though not “earth-shattering.” That would be the Clinesmith guilty plea. He also indicated there is more to come before the election: Both a full report and potentially further indictments.

“I said the American people need to know what actually happened, we need to get the story of what happened in 2016 and ’17 out. That will be done.

“The second aspect of this is, if people crossed the line, if people involved in that activity violated criminal law, they will be charged. And John Durham is an independent man, highly experienced, and his investigation is pursuing apace. There was some delay because of COVID, but I’m satisfied with the progress and I’ve said there are going to be developments, significant developments, before the election.

“But we’re not doing this on the election schedule.”

Given that one candidate was a victim of the illicit activity in 2016 and 2017 and the other candidate was central to some of that activity, we voters have a right to know it all before going to polls.

Here is the charging document against Clinesmith: