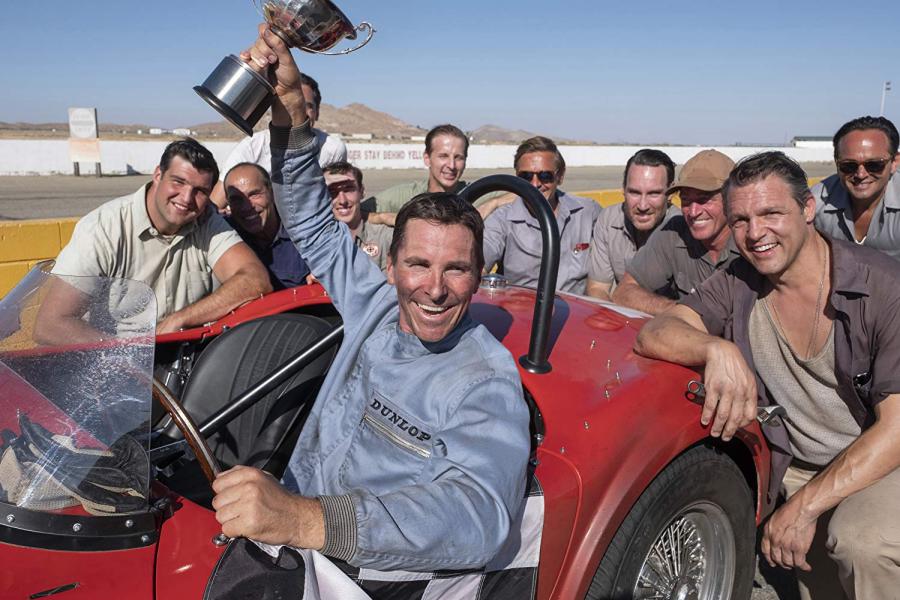 Matt Damon plays Carrol Shelby, a retired race car driver with a heart problem. Christian Bale plays Ken Miles, a brilliant race car driver with an ego problem. Good performances are turned in by Damon, Bale, and all the supporting cast. But especially by Caitriona Balfe, who plays Miles’ wife Mollie, and Noah Jupe, who plays his son Peter. The wife and the son make Miles into a much more sympathetic character.

Miles and Shelby had a stormy and broken relationship. They come together again because the Ford Motor Company wants to win the 24-hour race at Le Mans. Ferrari has dominated the race for years.

Many movies would’ve been satisfied with just the tension provided by the race, but Ford vs Ferrari is not content with that. Dramatic tension comes in from multiple levels. And the other levels are more interesting.

Ford wants to win at Le Mans, but the company doesn’t know what is required to do that. They have tremendous experience in the mass manufacture of automobiles — as well as war vehicles, as Henry Ford II points out. They don’t have all that much real experience in working with the people who drive high performance vehicles. (Ford is brought up to speed on this in a memorable scene that I will not spoil for you.) This brings tension between the Ford Executives and the race team.

Miles is an important part of the racing team, but as skillful as he is with driving, he lacks patience in dealing with people who do not understand racing cars as well as he does, and he lacks the skills necessary in hiding that impatience. This brings tension between him and Shelby, as Shelby works both ends between Miles and the Ford Executives.

Shelby is a facilitator who provides the oil that helps these two high pressure parts from grinding to a halt.

One of the aspects of the movie that makes it American is its love of individual resourcefulness over corporate overkill. This is made perfect in a scene where the corporate engineers have loaded down the race car with a heavy computer to see how its performs. Miles makes them strip that computer out and replace it with strips of wool attached to the car with tape. The engineers themselves respect the elegance of this approach.

It is in our nature to want the individual David to beat the corporate Goliath. We root for the underdog. But it brings to mind a discussion I had earlier this week about warriors versus soldiers. An individual warrior might beat an individual soldier because of the warrior’s individual skill, but the soldier’s side will win, because he is part of a team.

This is the great appeal of this movie to me. It highlights the struggles I experience as I try to excel as an individual with my own goals while I am a part of a larger entity that has not only my goals, but goals of its own to pursue.

Bobby Neal Winters is associate dean of the college of arts and sciences and a university professor at Pittsburg State University. A native of Harden City, Oklahoma, he blogs at Red Neck Math and Okie in Exile.