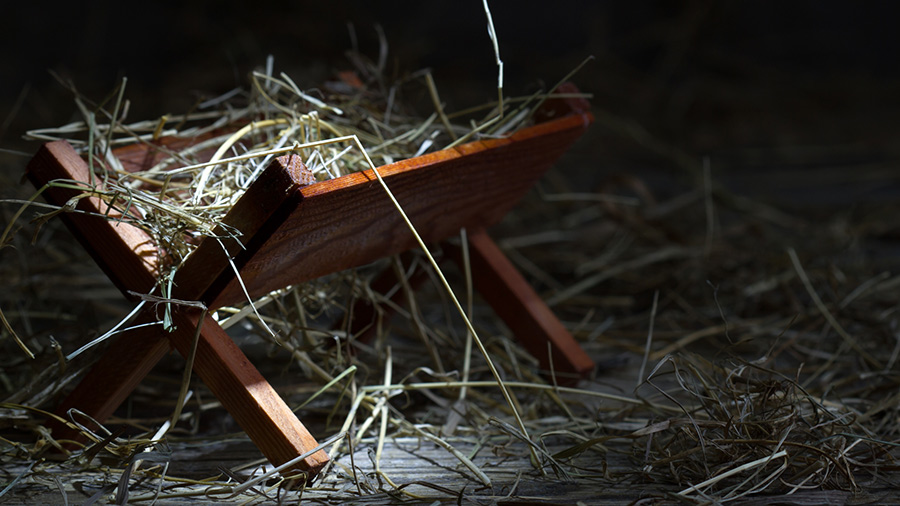 This year, as every year, the crèche has sat empty of God. The shepherds knelt, the angels sang, the ox and ass and eager lamb looked on, even Joseph and Mary stared down adoringly — at a vacant manger. There was no Infant here. When people knelt before this nativity scene to pray, they closed their eyes, as if averting their gaze from a lovely face that gaped with a missing tooth.

For all the lights and wreaths that have hung since before Thanksgiving, it is not Christmas yet — as the good men of the Holy Name Society (who craft the crèche) remind us by withholding the Jesus bambino for four long weeks, until the eve of the feast.

So it goes at Immaculate Conception, the New York City church where I was baptized and grew up helping to construct the nativity scene each year, and where I expect someday to be buried. Each year, through the weeks of Advent, I pass the empty manger and feel a potent twinge at the desolate cradle — a hint, perhaps, of how expectant parents must yearn, and how the Israelites groaned for a Messiah.

The nativity scene remains an exquisite piece of popular pious art — potent enough to keep its hold on our imaginations, amidst the tinsel, the tipsy parties and the toys. Begun by the man his contemporaries called “a second Christ,” St. Francis of Assisi, this custom of assembling wood, or plastic, or papier-mâché to re-present the scene of Jesus’ birth anchors the feast less in the mind than in the heart, reminding all that first and foremost this is a feast of birth.

A Feast of Human Birth

Of human birth. The God we Christians adore climbed down from the pillar of fire, emerged from the burning bush, to walk among us. He did not, like Zeus, impersonate a swan or bull, or like Apollo a golden youth. Instead, He lay down as a helpless infant among the beasts, and placed Himself entirely at our mercy. So likewise would He, one day, lay down His life.

Herein lies a paradox. Because the dominant note in the life of Jesus, for all His tenderness toward sinners and humble victimhood, was not passivity or surrender. He knew Himself the son of kings and Son of God, and so He spoke “as one with authority.” Jesus challenged the men of might and Mammon who had hijacked their ancestral religion for pride or gain. Our Lord displayed a healthy loyalty first to fellow members of His noble, ancient race — but compassion toward foreigners — as with the gentile woman who sought her daughter’s healing:

He answered, “I was sent only to the lost sheep of Israel.” The woman came and knelt before him. “Lord, help me!” she said.

He replied, “It is not right to take the children’s bread and toss it to their dogs.”

Yes, Lord,” she said, “but even the dogs eat the crumbs that fall from their masters’ table.”

Then Jesus answered, “Woman, you have great faith! Your request is granted.” And her daughter was healed from that very hour. (Matt. 15:24-28)

A Man Without Fear

He rebuked the wind and waves, drove demons out, threatened to tear down Solomon’s temple, then emptied it of moneychangers with a whip of knotted cords. With His life at stake, He displayed neither fear nor fawning — deigning only to speak to the procurator of mighty Rome a few sarcastic words. And death itself, which claimed Him gruesomely, He shook off like an ill-fitting coat, to emerge alive from the underworld — as Byzantine icons wonderfully depict — leading an army of the righteous dead, from Adam to Abraham, Melchizidech to the Maccabees.

Knowing all this, one awaits the Infant with a hint of fear. When the babe is laid at last in the straw, it seems to radiate. The awe on the Wise Men’s faces now makes perfect sense — as if they hear in the Child’s heartbeat the ticking of a clock, which once it stops will blast apart the sinews of the world.

The Uncanniness of Children

There is something of this power in the birth of any child — for good or ill. Ron Rosenbaum makes much in his eloquent book Explaining Hitler of the fascination some feel with photographs of the infant, still-innocent Adolf. Each child who’s born contains within him the seeds of virtues and vices, hard-wired from his ancestors — and a mystic spark of infinitude, his capacity for free will. We can neither pretend that children are born blank slates, nor that they are fully-written scrolls which merely await unrolling. In every child, as in the Christ child, there abides an eternal paradox—which is why the human “sciences” will always remain an expressionist art.

Any healthy creature or culture shows two signs of life: It reproduces itself, and it fights off intruders. The West, for the past generation, has lacked the vigor to undertake either task.

If Mary’s conception of Jesus was miraculous, there is a smaller wonder abiding in the work of every loving parent. Young women who have spent their youths painting and preening to win a mate now pour their strength and beauty into another — neglecting their own needs and ambitions for the sake of this new creature, this wild hazard into the future. Young men increase their toils, take up the burden of long hours and grueling obedience, the better to store up treasure for the benefit of—this baby. This tiny stranger, who shares with them some chromosomes, they trust. The last luxuries of youthful narcissism are burned away in the bonfires of the hearth. Mary and Joseph do not look into a mirror, or even at each other; forgetting all else, they gaze upon the Babe.

So we see in the tame tableau which stands before a hundred thousand American churches, and millions of family homes, the sacrificial mystery in miniature which makes possible human life. It also explains the survival of every race and culture which walked the earth, and the secret to their continuance. Demography is destiny — and the cradle will have its revenge.

As demographers have documented, the growing power of this nation’s “Christian right” can be found in its burgeoning birth-rate, in the fact that men and women in the “red counties” have chosen new life over lifestyle, and progeny over pleasure. They abandon the cultural richness and beauty of cities, and take to the desert — willingly inhabiting the soulless “sprawl” which consumes ever more of our landscape every year. And for what? To shield their offspring from chaos, crime, and corruption. Those of us who cling to the beautiful “blue counties” — with their ethnic restaurants, convenient transit and exquisite, empty churches — will lack the space, the means, or the peace of mind to produce large families. Instead of conceiving and raising children, we talk of breeding tiny clones of ourselves to cannibalize for parts. The present advantage is ours — but we will have no future.

The contrast is ever starker in Christendom’s cradle, Europe. One need not have wept (as I did) while reading Pat Buchanan’s The Death of the West to know what is happening; the pansexual hedonists of the Netherlands are now in a panic over their nation’s Islamic future. Even the blasé Parisians have begun to wonder whether their nation’s bureaucratically atheist state is acid enough to dissolve the faith of burgeoning immigrants — before the Arabs outbreed, outvote, and expel the residual Frenchmen. The Germans who a generation ago worshiped their race as a pagan god now look on lackadaisically, and welcome the Turk into Europe. To read their children’s future, they may look to the fate of the Christians in Lebanon, or Kosovo — two other lands where the cradle has had its revenge.

Any healthy creature or culture shows two signs of life: It reproduces itself, and it fights off intruders. The West, for the past generation, has lacked the vigor to undertake either task. But each of us plays a part in this catastrophe — or its reversal. Just as we work to awaken our fellow citizens to an immigration policy which caters to the greed of stingy employers and the graft of politicians, so we can each do our part to win back the future.

We can open ourselves to life, accept the myriad sacrifices entailed in parenthood, and embrace just one more child than we had hoped for. There is a Catholic website, One More Soul, which implores married couples to do just this. We need not (and should not) concern ourselves with convincing other peoples to reduce their child-bearing. Let us mind our own business, and populate our own country.

Imagine that: If overnight, the native-born peoples of the U.S. increased their birth rate by 50 percent. Imagine if the same thing happened in Europe. The cries of immigration enthusiasts that we need to import our next generation from abroad would be drowned out — in the yawling and giggling of millions of native newborns. The backbreaking jobs we are currently pressing upon middle-aged foreigners would be taken up soon by teenagers—our own and our neighbors’ children. The immigrants among us would see a vigorous, vital culture — and wish to assimilate. Deprived of constant influxes from the Old Country, their offspring would intermarry with our own, and a little spice to our current stew — instead of filling up our emptying country like a vessel.

Since I love old Europe too, I hope that this generation can rouse itself to reject the invasion of an intolerant, alien faith — a truncated heresy of Christianity best suited to desert nomads — and deed its children a chance of rediscovering their heritage. Better Notre Dame remain unused for a few decades in an underpopulated Paris than be turned, like Hagia Sophia, into a mosque. We owe too much to Europe to slough it off like the shell of a hermit crab. The continent which gave us Charlemagne and Shakespeare, de Tocqueville and Vincent de Paul, deserves a second chance. Out of this filial piety to the cradle of our culture, I pray that the Turks once again will be turned back at its gates.

And I pray that Americans learn to love life once again — to love it rightly and truly, according to the rules its Author imposed. These rules He respected enough to obey them Himself: He was born of woman, poured out His strength in the service of others, and one day He died. The family he fathered with that blood, the Church, lives on in the normal way — by filling its empty cradle with a thriving Christian child.

Merry Christmas to one and all.

This essay originally appeared at Takimag at Christmas 2007. It has appeared in many places since then. John Zmirak is a Senior Editor of The Stream, and author of The Politically Incorrect Guide to Catholicism.