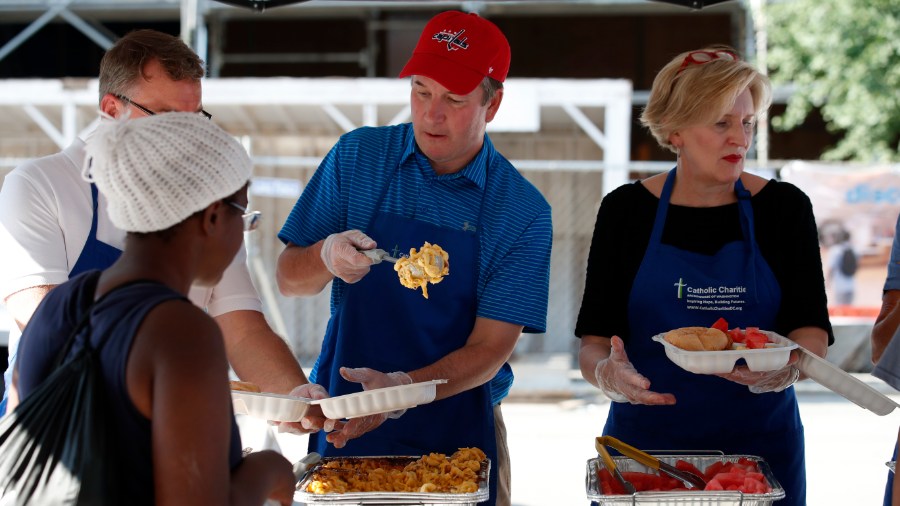 Supreme Court nominee Brett Kavanaugh, center, serves macaroni and cheese to the homeless as he volunteers with Catholic Charities, Wednesday, July 11, 2018, in Washington.

After several women’s rights organizations suggested President Donald Trump’s pick for the next Supreme Court justice doesn’t have the support of women, a group of former female clerks came out to defend their former boss, Judge Brett Kavanaugh.

“More than 50 percent of his law clerks have been women,” said Jennifer Mascott, a law clerk for Kavanaugh in 2006-2007 who is now assistant professor of law at the Antonin Scalia Law School at George Mason University.

“There was at least one term where I believe all four of his law clerks were women. He has support from all corners and all walks of life,” Mascott said in an interview with The Daily Signal.

“There just could not be a more terrific, qualified nominee,” she added.

Rebecca Taibleson, who clerked for Kavanaugh on the D.C. Circuit Court of Appeals in 2010-2011, described this sliver of the legal profession as “notoriously male-dominated.”

The year after she clerked for Kavanaugh, for example, Taibleson clerked for Supreme Court Justice Antonin Scalia. At the time, there were 39 other law clerks at the Supreme Court, she said, but only 13 were women.

Taibleson described that as “pretty typical.”

“To get a Supreme Court clerkship, you have to have strong advocacy and support from your appeals court judge, and that’s how I got there — through Judge Kavanaugh supporting me.”

That support, Taibleson added in an interview with The Daily Signal, has helped female attorneys in more ways than one:

Despite this, one of the left’s leading narratives suggests a Kavanaugh confirmation isn’t supported by women — and would be bad for them.

ICYMI: Trump’s White House sent reporters 34 testimonials in support of Brett Kavanaugh. Wanna take a *guess* how many of these testimonials came from women?

ZERO. 100% were men. Definitely no cause for us to worry that #SCOTUSPick is out to undermine our freedoms. pic.twitter.com/C39nsAAqTR

Anti-woman interest groups on the right have been waiting for this moment for decades. They will do whatever it takes to roll back our hard-won right to choose. They’re ready for this fight. But so are we. Join us: https://t.co/WQMFQNxtbq #DefendRoe

Hours after Trump announced his choice of Kavanaugh on Monday night, NARAL Pro-Choice America, for example, released a statement suggesting women should be alarmed because of a lack of testimonials about the judge from women. The group tweeted:

“Trump’s White House sent reporters 34 testimonials in support of Brett Kavanaugh. Wanna take a *guess* how many of these testimonials came from women? ZERO. 100% were men. Definitely no cause for us to worry that #SCOTUSPick is out to undermine our freedoms.”

The Senate includes 17 Democrats who are women and six Republicans who are women. Of the six GOP women, three issued their immediate support:

Judge Brett Kavanaugh is a highly-qualified, well-respected justice committed to the rule of law. He deserves a respectful and timely confirmation and I stand ready to offer advice and consent to Judge Kavanaugh as he moves through the confirmation process.

Just met #SCOTUS nominee Judge Brett Kavanaugh while I was at the @WhiteHouse tonight for @POTUS’ announcement. The president made an excellent choice, and I look forward to moving forward with the confirmation process. My full statement: https://t.co/UPH47CmbL7 pic.twitter.com/TnlqRJaC19

I was honored to be at the White House when President Trump made the announcement about the Supreme Court. I support his conservative choice! https://t.co/7BzQNR5UhW

The remaining three — Susan Collins from Maine, Lisa Murkowski from Alaska, and Deb Fischer from Nebraska — signaled an openness to Kavanaugh’s nomination.

At least nine other former female clerks came forward to publicly praise Kavanaugh both professionally and personally, shedding light on the ways he influenced their careers.

“At the end of my clerkship, my parents sent a short note to Judge Kavanaugh, thanking him for having been such a wonderful boss and mentor to me,” said Caroline Edsall Littleton, a clerk in 2011-2012, adding:

Their note very easily could have gone without response, but instead Judge Kavanaugh took the time to write a heartfelt note in return, thanking them for how they raised me. To this day (nearly six years later), my parents still cherish that note. This is the kind of person that Judge Kavanaugh is — an extraordinarily thoughtful man, who goes out of his way to be kind.

“The year I clerked for Judge Kavanaugh, he had hired four female law clerks — a first for any Judge on the D.C. Circuit,” said Katie Wellington, who clerked for Kavanaugh in 2014-2015.

“Today, he is a mentor to each of us as we pursue careers in public service, private practice, and academia.”

Taibleson now lives in Milwaukee, Wisconsin, where she works full time in addition to being the mother of three children ages 3 and under. She attributes much of her “still very vibrant career and career prospects to Judge Kavanaugh and his advocacy and support for me since law school,” Taibleson told The Daily Signal in a phone interview.

“I think there are dozens of women who can say the same,” she added.

“I feel very thankful for the opportunities I have had to be able to spend a lot of time with my children and husband, who’s great, but then also continue to work in the law,” said Mascott, the assistant professor at Scalia Law School. “Judge Kavanaugh, at every step along the way, with whatever process my career was in or work-life balance, has always been a great sounding board to give advice and to keep family at top priority.”

As for Kavanaugh’s ability to continue his role as an involved father of two young daughters while taking on the responsibilities of a Supreme Court justice, Mascott said she has no doubts:

The great thing about him being on the D.C. Circuit, which is just a court that hears a lot of tough, challenging cases with the big administrative record, is … he already has a track record so we can already see how he would balance family and work, and I anticipate he would do the same thing at the court as he does currently. … I think he also brings a sense of efficiency and rigor that enables him to be great at his job and then also spend time with his family.

“He couldn’t be a better advocate for women in his actual day-to-day life,” added Taibleson, “which I think is the most telling place to look for evidence of this.”

Walking Away From Iran Deal Could Be Trump Card for Success in North Korea Talks, Experts Say