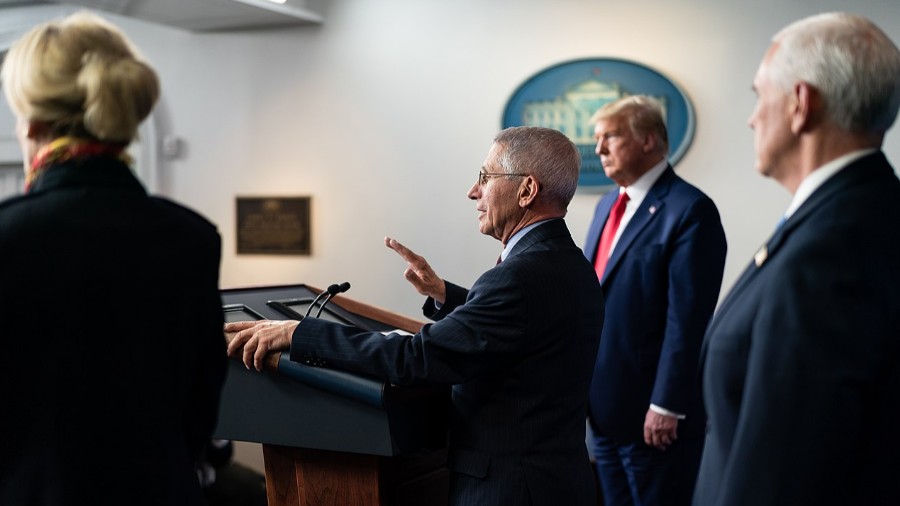 Back in the spring — we have this on camera — the Fabulous Fauci told the truth. Don’t wear masks, he said. They’re useless.

He was right about that, and should have said what he said. But he said it before the Cult of the Mask became politically and culturally powerful, before the experts knew it was the perfect visual symbol of compliance. It was only after that that Fauci “moved on” from his earlier remarks and insisted people should wear masks. That shift put him back in with the mainstream again, and allowed him to remain its “science” spokesman.

He now says “Wear a mask”, but he like many elites don’t bother wearing one when they thinks the cameras are off, as we all know, because they know the true value of masks, which is none. Take yours off and stop spreading fear.

Here’s another instance, this one about herd immunity.

.@DanaBashCNN presses Dr. Fauci on his comments about “moving the goal posts” on herd immunity based on polling. “Why weren’t you straight with the American people about this to begin with?” she asks.

He deflects multiple times. She presses and he says it’s just a “guesstimate.” pic.twitter.com/kquQvlwZ8j

Note that this is a friendly site, CNN. The Fabulous Fauci cannot find a more sympathetic interviewer.

The talking head asked him about his ever-in-flux estimates about herd immunity, and he temporizes about learning more. (I don’t think the 70-85% is far wrong, but that includes those who have had it or are vaccinated, a much easier total to reach than just vaccinated. How those who have had it are forgotten in his calculation is telling.)

This was brought up because earlier Fauci said 60% vaccinated to get herd immunity. In other places, he now says even 90%. Why the major change upwards? And what does polling data have to do with it?

The NYT provided the answer: Fauci’s desire to stay aligned with elite opinion.

In a telephone interview the next day, Dr. Fauci acknowledged that he had slowly but deliberately been moving the goal posts. He is doing so, he said, partly based on new science, and partly on his gut feeling that the country is finally ready to hear what he really thinks.

This is a lie.

Either he was wrong in his previous calculations and found an error, perhaps realizing there was better data, and didn’t want to admit his mistake, or he just plain came to the understanding his correct calculations didn’t fit with the narrative. Which is that “everybody” has to get vaccinated. What our elite and rulers mean by “everybody” can be debated, but they surely mean something closer to 90%.

To pretend he knew all along the proper number, but burdened himself alone with this terrible knowledge, only to realize that now was the time to tell the truth to a weak and hopeless population is utter garbage.

Besides, if that is true, then he is a liar for handing out the wrong information for so long. Plus it means we can no longer trust him, or any our great scientific elite, who may be lying to us for our own good. We’ll never know when they’re telling us the truth, for the new things they are telling us to replace the old lies may still be noble lies.

Just think, if this noble lie business is true, how many scientists not yet elite used the numbers provided by the elites to go off and do their own studies, or make decisions for themselves and others? All these works will have to be retracted.

That is, they’d have to be retracted if elites still cared about the old ways of doing science. Which they do not. Not when they can issue proclamations in the name of Health.

In any case, I don’t buy his explanation at all. Fauci is a pretender, and a man more eager to get in front of a camera than even Chuck Schumer.

Lord save us from celebrities.