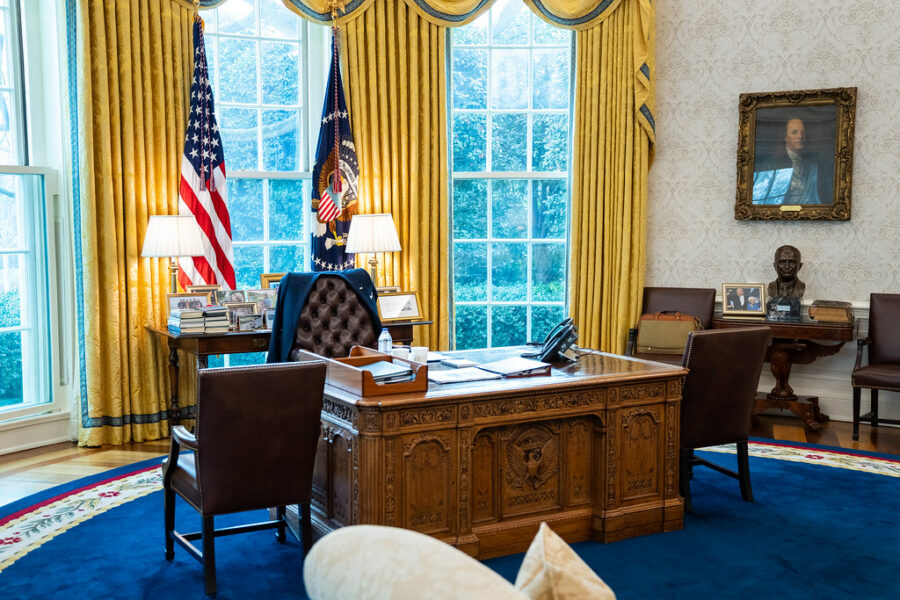 The empty chair in the Oval Office.

President Joe Biden has insisted that rising gas prices are not a result of his administration’s policies.

This week, he announced the United States would ban oil imports from Russia because of Russian President Vladimir Putin’s full-scale invasion of neighboring Ukraine.

Biden also has suggested that U.S. oil companies are responsible in part for the higher prices due to insufficient domestic production.

Here’s a look at three major claims about gas prices from the president:

When he announced the ban on Russian oil imports, Biden said the rise in gas prices in previous months was not the fault of his administration’s policies.

Biden said that only 10% of production takes place on federal lands, and the oil companies have “millions of acres leased” from the federal government.

“They have 9,000 permits to drill now. They could be drilling right now, yesterday, last week, last year,” the president said. “They have 9,000 to drill onshore that are already approved. So, let me be clear. Let me be clear: They are not using them for production now. That’s their decision.”

According to the U.S. Bureau of Land Management, there were 9,173 approved permits at the end of 2021.

But it’s not that simple, said Katie Tubb, senior policy analyst for energy and the environment at The Heritage Foundation.

“The 9,000 leases [statistic] is incredibly misleading and shows the administration doesn’t understand their own processes for managing energy production on federal lands and waters,” Tubb told The Daily Signal in an email. (The Daily Signal is the news outlet of The Heritage Foundation)

“Bidding for and winning a lease on federal lands and waters is the beginning of a long process to actually produce energy. After leasing, there’s exploration, environmental reviews, permitting, drilling a well, and putting in infrastructure … to actually access oil/natural gas.”

That can take years because of litigation and environmental reviews, according to the Western Energy Alliance, which is defending 2,200 leases for development from lawsuits brought by environmental groups. The federal government also conducts an analysis mandated under the National Environmental Policy Act.

Some leases won’t be developed if the company determines the quantities of oil and natural gas are insufficient.

Further, relying on the 9,000 leases line is “misdirection” from the White House, according to The Wall Street Journal editorial board. That’s because it’s not enough to simply have permits.

It takes about 140 days for the federal government to approve a drilling permit, according to the newspaper. Additionally, the Journal said, regulations have made it tough for companies to get permits to contract rigs for operating on federal lands.

Also, the Department of Interior’s five-year leasing program for the Gulf of Mexico expires in June, and the Biden administration hasn’t proposed a new plan, according to the Journal.

In the past week, the Biden administration proposed new climate standards that would regulate conventional trucks and declined to appeal a federal court decision that vacated the only leases it sold last year on federal lands or waters.

#2: Keystone ‘Nothing to Do’ With Oil Supply

White House press secretary Jen Psaki was dismissive of questions regarding the Keystone XL pipeline, which Biden canceled on his first day in office.

“The Keystone was not an oil field. It’s a pipeline,” Psaki said this week. “Also, the oil is continuing to flow in, just through other means. So, it actually would have nothing to do with the current supply imbalance.”

The pipeline transporting oil from Canada into the United States would not immediately boost supply. But as a futures market, oil prices are based in part on anticipated supply.

“The president should immediately rescind his policies to block the Keystone XL pipeline, and let the market decide,” De Haan said, adding:

He should also cease anti-oil-and-gas stances and let markets decide. That won’t help much now, but in the long run, it will reverse his damaging decisions. And the nation should support growing our energy independence, to help offset future situations like this.

Also, in the long term, the Keystone XL pipeline — stretching from Alberta, Canada, to Steele City, Nebraska — would carry about 830,00 barrels of oil per day into the United States from an ally.

That would easily supplant the 800,000 barrels per day the United States imported from Russia during 2021, according to the U.S. Energy Information Administration.

“Approving the pipeline now would be good longer-term policy, and would also send a strong signal to markets (investors, financiers, energy companies) that energy production and infrastructure are welcome,” Tubb said, noting:

We saw just this week how powerful those signals can be. The price per barrel of oil increased following Biden’s ban on Russian imports, then fell when the political ramifications were more muted than feared (and the EU didn’t join in the ban) and when the UAE mildly broke ranks and encouraged OPEC to consider increasing production.

The Labor Department’s new numbers, released Thursday, show consumer prices rose 0.8% over the past month and almost 8% over the past year. Gas is a big part of that, and Biden said it’s the fault of Putin.

“Today’s inflation report is a reminder that Americans’ budgets are being stretched by price increases, and families are starting to feel the impacts of Putin’s price hike,” Biden said. “A large contributor to inflation this month was an increase in gas and energy prices as markets reacted to Putin’s aggressive actions.”

Putin is clearly a factor, but inflation and rising gas prices have been a problem for some time, Tubb said.

“Russia’s invasion of Ukraine is certainly impacting oil markets and creating a lot of uncertainty about future supply/scarcity that are impacting price, but to stop there is misleading,” she said, adding:

President Biden has consistently told energy companies to increase supply today, but don’t make any long-term investments. What company wants to risk millions to billions of dollars in employees, equipment, infrastructure if they’re not going to get a return?

Although Energy Secretary Jennifer Granholm called for more energy output, Tubb noted the various federal agencies targeting the oil industry with regulations, such as the Securities and Exchange Commission, the Labor Department, and the Office of Comptroller of the Currency.

Amos Hochstein, an energy adviser at the State Department, said the “conflict has made it clear to us that we should double down and triple down on the transition [to green energy], and to make it broader, bigger, and faster.”

He added: “Transforming our economy to run on electric vehicles powered by clean energy with tax credits to help American families winterize their homes and use less energy, that will — that will help.”

However, the Energy Information Administration finds no scenario under which global demand for oil and natural gas would not increase through at least 2050.