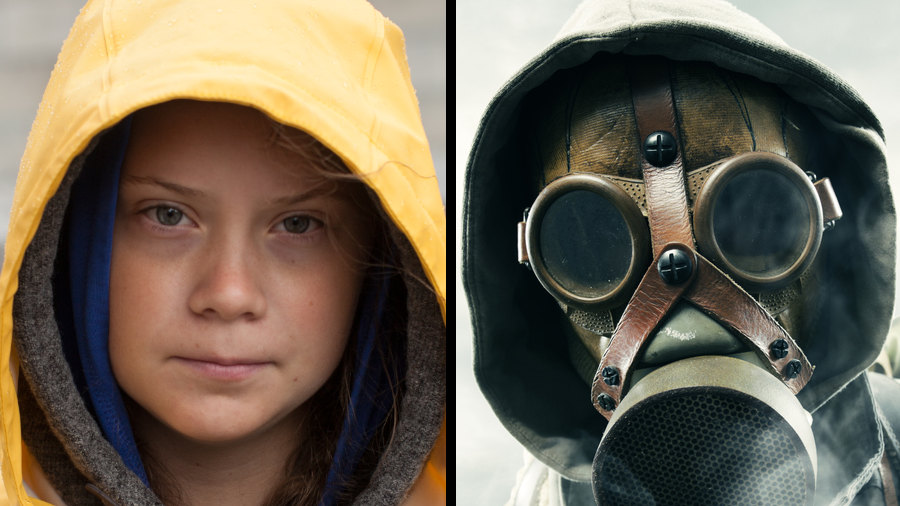 By Dwight Longenecker Published on September 25, 2019 •

Watching the sad rant of a sixteen year old girl about climate change made me start thinking about the end of the world. Greta Thuberg was clearly very upset and genuinely alarmed at the prospect of a climate meltdown, the extinction of species and the end of life on earth.

Her speech brought back memories of my boyhood in a fundamentalist church. The pastor was a dispensationalist. He taught that God had divided history into different chronological segments called “dispensations.”

According to his beliefs we were living in the end times. Jesus was going to come and supernaturally sweep all the true believers up into heaven. There would be a seven year tribulation, then the final judgement and end of all things.

Get Ready for the Rapture

Despite Jesus’ teaching that “no man knows the day or the hour” of the Lord’s return, the leaders of some Christian sects and cults have been foolish enough to set dates. They’ve gone out on the hillsides with their followers looking upward for the rapture. So far they’ve all been embarrassed when the sun came up the next morning right on schedule.

I’m not disputing that this world will pass away. Its part of Christian teaching that the clock will run out, the last play will be made, the game will be over and the scores will be added up.

There will be an apocalypse. Will the world end with a bang or a whimper? We don’t know when and how, but as C.S.Lewis has put it, “the curtain will come down and the play will be over and the playwright will come on stage.”

What interests me about the end of the world scenario is that its not only Christians who believe in the end of life on earth. Non religious people also cling to apocalyptic world views. Greta Thunberg’s panicked tirade at the U.N. reveals a genuine fear of the end times.

I’m old enough to remember the population panic. In 1968 Paul Erlich’s book The Population Bomb sparked the fear of catastrophic overpopulation. He predicted that by the year 2000 there would be so many people that we were all going to be starving and fighting for food. It never happened. Instead we are facing a demographic winter. By 2050 it is likely that the human population will be in terminal decline worldwide.

The population bomb came fast on the heels of the global panic over nuclear holocaust. We were going to run out of oil. Industrial pollution was going to destroy our environment. There was going to be a new ice age. Then there was the imminent collapse of the bee population which would mean all our crops would not be pollinated.

Is the need for an apocalypse just the fact that newspaper editors like a shocking headline? Is the fear of end times just another form of click bait?

The Clock is Ticking

There is something more mysterious going on here. It is as if we actually need an end of the world scenario to give our lives meaning. We need a focus for our fears. We need something to fight for. We need an enemy.

What is that all about?

I think I know. The fact of the matter is, we are creatures bound by time. History has a beginning, and our world will end one day. To be more specific, each one of our little worlds will end.

In other words, we’re all going to die.

That reality haunts us. We push it to one side. We rarely think about it. We know we are going to die, but we live as if we are immortal. Nevertheless, that nagging truth taps us on the shoulder from time to time. The grim reaper stands waiting at the door with his robe, his hood and his scythe.

Full of fear, we look away and project those fears onto a different apocalypse. Maybe its the rapture and the second coming of the Lord. It could be Armageddon or nuclear disaster. It could be the threat of an asteroid colliding with planet earth. It could be a devastating plague that wipes out the human race. It could be one of a whole range of other disasters, but whatever the apocalypse, that’s not really what its about.

Get Ready, Get Set, Go

Is man made climate change a reality? It could be. I’m not an expert. Certainly we should be more thoughtful and less wasteful. As individuals and a race we should do all we can to protect the natural environment and adapt to change in a positive way.

But beneath all the panic, what I do know is that everybody needs an apocalypse to focus their fear about their own end of life. We all need an apocalypse.

If my theory is right I also have an answer. Each one of us should be realistic. Our world will end one day. It could be after a long, full and happy life or it could be today with a sudden heart seizure, a traffic accident or a moment of unexpected violence.

The mature and realistic person faces their personal apocalypse and is prepared. They strive to live in such a way that they are ready for their world to end. Therefore we should live this life preparing for the next.

Fr. Dwight Longenecker is a Catholic priest, author and speaker. Follow his popular blog, listen to his podcasts, browse his books and be in touch at dwightlongenecker.com.