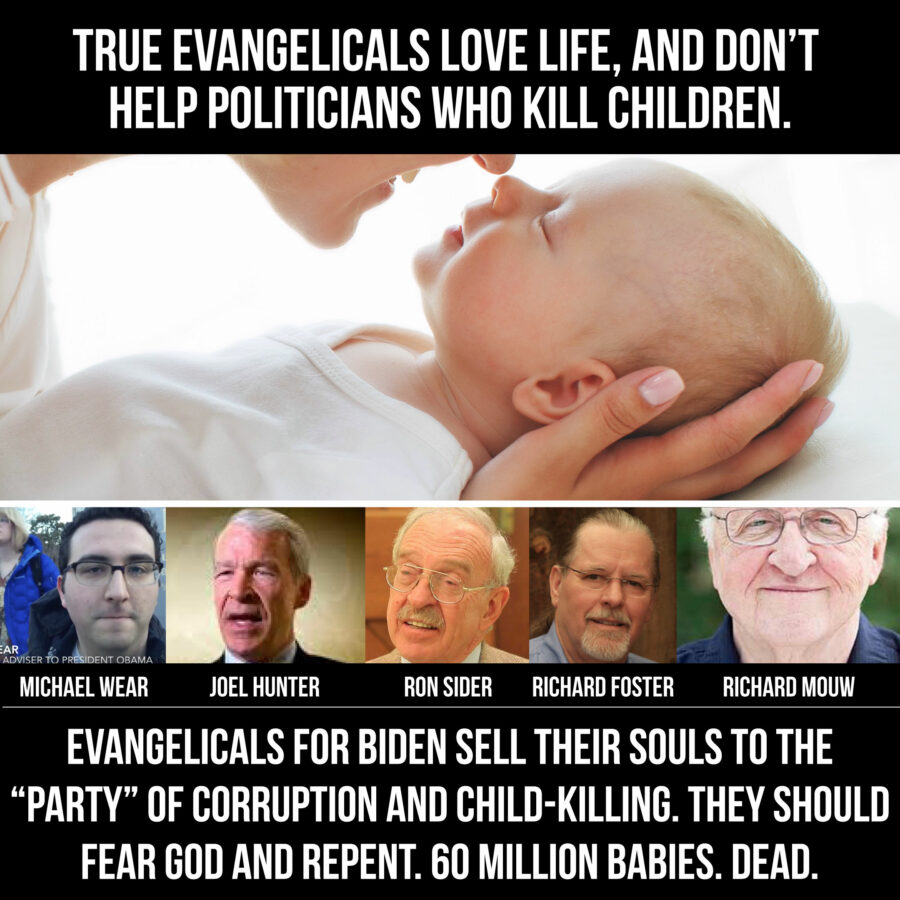 Last week, The Stream ran a sobering, prophetic message from a great Catholic leader, Archbishop Carlo Maria Vigano. It called on Catholics to repent our easy, sleazy acquiescence in the corruption of our Church, so many of whose leaders (including Pope Francis) seem to support Joe Biden’s pro-choice party.

Perhaps they simply carry on the old, tribal loyalties of long-ago Catholic immigrants to the Democratic Party. Or else they’ve been bought by the 40% of bishops’ budgets that come via federal contracts. Maybe they just want to be liked and considered “normal” by their neo-pagan neighbors. But far too many of my fellow Catholics will pull the lever for a pro-abortion, anti-Christian party, and it’s a scandal. It makes me sick.

A Call to Evangelicals

I’m glad to see that evangelical leaders are also stepping up to demand an accounting. Today I’d like to share with you excerpts from a powerful document, “A Call to Repentance.” Its authors belong to the American Association of Evangelicals. Signers include a long list of prominent pastors, authors, and other ministers of the Gospel.

They have been watching carefully as a crucial segment of the American church sat under siege. Bible Christians more than most have suffered unremitting pressure from a hostile, scornful culture. Parents have agonized over how to keep their young people committed. Pastors have fumbled and compromised with the World.

And some have taken what really amount to bribes from frontmen for George Soros and other Progressive dissemblers. The AAE documents the financial links between ostensibly Biblical churches and secular, anti-Christian billion-dollar foundations.

As documents confirm, and as Rev. Jim Wallis of Sojourners eventually admitted, Leftist foundations, following the lead of billionaire George Soros’s Open Society Foundation, fund and “rent”* Christian ministers as “mascots” serving as surprising validators for their causes. The consequent outcomes include harm to countless people, the Church, the family, race relations, the poor, the nation and the global Church including many martyrs.

Though many Christian ministries are struggling, a few of the Soros network “faith” and “interfaith” grantees include Jim Wallis of Sojourners, Richard Cizik’s New Evangelical Partnership, Telos, J Street to malign Israel, Catholics in Alliance for the Common Good, Faithful America and Gamaliel, with PICO and Faith in Action who assisted the visit and priorities of Pope Francis. Billions of additional dollars to “Christian VOLAGs” for large scale “refugee” and migrant resettlement came from the Obama administration. This is a short list.

It’s time to repent, the AAE suggests: “[A]t times, believers who normally turn the other cheek are also called to overturn tables.” We stand on the very eve of an historic U.S. election, when Caesar might turn on all of us with savage, vindictive fury. But millions of believers seem ready to passively vote in favor of their own persecution. We need to know what went wrong within our own churches and communities, to bring us to this pretty pass. AAE’s diagnosis is clinically accurate.

The AAE warns of

“faith leaders” promoting policies and politicians who advance human harms of abortion, threats of unjustly “stacking” our Supreme Court, drug and “sex worker” legalization, open borders, mass amnesty and voter fraud that would end America as a free republic. These projects would “fundamentally transform” our nation into the kind of dystopian “open society” and “permanent progressive majority” that our Founders urged and entrusted us to prevent.

Poignantly, the authors observe, “Americans do not deserve a dark, lifeless monoculture run by unelected totalitarians.”

A times, believers who normally turn the other cheek are also called to overturn tables.

Return the Money and Repent

But that is precisely what we will get, if NeverTrump Christians vote for Joe Biden and his fellow believers in Abortianity. The AAE calls on such wavering souls to change course, while there’s still time.

We urge ‘progressive’ evangelicals and Catholics, and allied anti-Christian activists using biblical language and optics but not biblical meanings and truths, to turn away from work that often advances a harmful political agenda. We ask you, as applicable, to return the money and repent before the Lord. We write as true friends who want the best for you, for Americans and for the world God loves. We ask you to turn from evil and do good. [emphasis added]

To those who use the tired, discredited rhetoric of “systemic racism” and other conspiracy theories, the AAE have an answer.

How ironic and stale for the very leaders whose “progressive” policies are hurting minority communities to falsely label those with political differences as “racists.” Under “progressive” leadership, Hispanics and African-Americans suffer the loss of work and income, rising urban violence and family disintegration including children targeted by abortionists for death. Under conservative leadership, families, religious liberties, second chances, jobs and opportunity zones are restoring countless lives and communities.

The Biden Plan for Babylon

What does a Biden administration really offer the Church in America? The AAE reports, soberly, on what that party’s platform and track record promise:

Vote for a Plan, Not a Person

The AAE authors break the spell cast by some Christians who fixate on aspects of a single man’s private life, often indulging in speculation and gossip. Instead they look to the binary choice Americans face on November 3:

Barna Research indicates that more than 80 percent of all evangelical voters, not just “white evangelicals,” voted for Trump/Pence in 2016. These Christians did not “idolize” Donald Trump, but naturally chose the pro-life, pro-faith and pro-growth Republican platform that was, in fact, honored and advanced over these four years. Nonetheless, evangelical critics curiously refuse to acknowledge the logic of looking beyond two frontrunner personalities, to two very different visions and futures for our nation.

The AAE calls on American believers to follow the obvious, logical implications of Christian principles in the voting booth this year. A spokesman for the group, Dr. Jim Garlow, President of Well Versed and former Senior Pastor at Skyline Church in San Diego, says plainly:

These leaders and I are sending a word of warning for those Christian leaders, and for any person, who votes for any candidate, such as Joe Biden, who supports the murder of babies in the womb. Such a vote means that blood is on your hands, and you stand before God, fully accountable. I say this as an adoptive father of four children. I plead with you, for the sake of your soul, that you cast your ballot on a spiritual basis, for somebody who will stand for the most innocent.

Please go read the full statement, share it with friends, and lift our endangered nation up in prayer at this crucial moment.