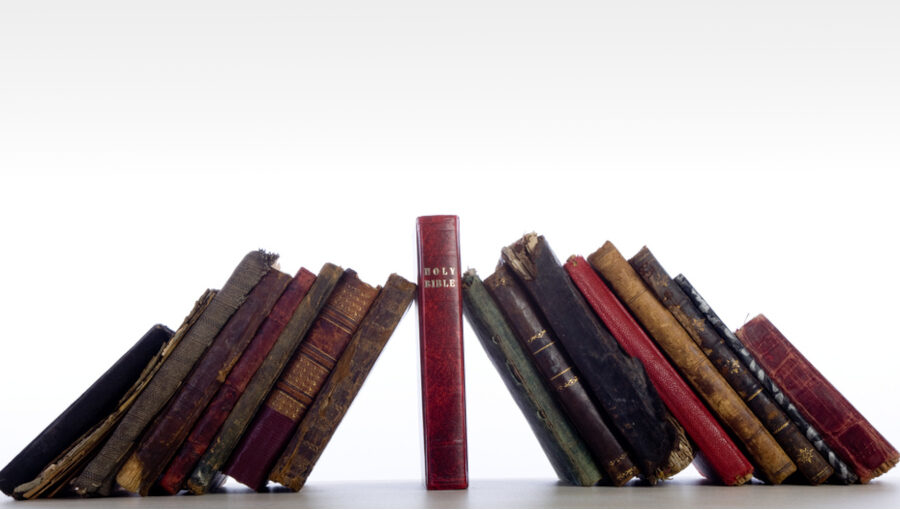 I ran into it again today. Someone had posted a question on Facebook asking for the best books to help understand the Bible. He added, “Please don’t say Bible.” Of course he knew they would anyway and sure enough, some did. Here’s part of one person’s explanation for it:

For anyone who thinks the Bible cannot help one understand the Bible, they are basically saying God’s word is not sufficient enough. … God’s word is sufficient for EVERYONE. Now, if you wish to use inferior means than the Holy Ghost feel free. That is not the case for me nor will I ever tell someone to read an inferior book to explain the word of God.

It’s quite an unfortunate error he’s making there, a rather unthinking one, even. I doubt many Stream readers make that mistake, but you may run into people who do. Here are four ways you can explain to them it’s wrong.

Paul wrote to the young pastor Timothy, “Preach the word; be ready in season and out of season; reprove, rebuke, and exhort, with complete patience and teaching” (2 Tim. 4:2). This cannot mean that Timothy should merely stand in front of the church and read Scripture to them. Paul goes on to warn of people who “will not endure sound teaching.” Paul commended the Colossians for learning from Epaphras (Col. 1:7). Leaders who teach and preach are “worthy of double honor” (1 Tim. 5:17).

What the reformers actually meant, and what the phrase still means, is that Scripture alone holds authority. It was their answer to Catholics who (wrongly, in their view) put Tradition above Scripture. Protestants and Catholics may still disagree on the authority of Tradition, but Protestantism has never said we should ignore tradition.

Yes, that’s right: Protestants have tradition, too, and we must learn from it. Consider just one example, the Christian teaching on the Trinity. The Bible teaches that God is Three in One, right? Right. Absolutely! But where do you find it in there? What does the word “Trinity” really mean? How do the three Persons of the Trinity relate to each other? Is this polytheism? How is it possible to have one God in three Persons without contradiction?

If you think those are easy questions, you’re cheating; you wouldn’t have figured it out on your own, I assure you. Rather, you got your answers from a teacher, who got them from another teacher, who ultimately got them from the early Church Fathers who first struggled to answer them. It took them decades of hard, brilliant work to produce the first solid statement on it, the Nicene Creed. We still rely on it today, though it still provides only part of the answers we need.

We understand the Trinity (and all Christian doctrine) as we do because people did this hard work; and they wrote their explanations in books, by the way, not just in short creeds. This is part of our tradition, and we all depend on it.

Scripture retains the place of authority in Protestant Christianity, but that doesn’t make it our only source of information. Why should every believer have to work it all through for himself or herself, anyway?

Again, this seems so painfully obvious, you’d wonder why anyone would disagree with it. I’m going to speculate now, and suggest two possible reasons.

First, there are people among us who rely on history without knowing it. They just don’t realize the extent to which their beliefs have come to us from books written by other believers since the first century. They search out evidence for the Trinity in Scripture, unaware of how unlikely it is that they’d be doing that if someone hadn’t first told them about the Trinity. They’re lacking both knowledge and self-awareness.

He’s saying, “Listen to my teaching: Don’t listen to anyone’s teaching.” It’s impossible: I couldn’t follow his instructions without disobeying them!

Second, I fear that for some people it’s a kind of hyper-spirituality, which is not really spiritual at all, but is instead a proud display of spiritual pretense. I am not saying that’s case of the person I’ve been interacting with on Facebook, as that’s the sort of conclusion no one should draw quickly, and never without actually knowing the person. Yet there are hints there that make me wonder. “Now, if you wish to use inferior means than the Holy Ghost feel free.”

It almost sounds like he would consider me an inferior person for using “inferior means.” If I’m inferior, fine, let me be humbled before God and others. But if he thinks he’s superior (with emphasis on if), that’s spiritually dangerous for him, especially since he’s not demonstrating much knowledge or self-awareness in the process. Pride is the chief sin; and the one who takes that superior attitude is harming himself before God, and dishonoring God before men.

Finally, it’s an impossible belief to maintain. I mean literally impossible. I’ve asked this person, “Would you also say that a Facebook post is also an inferior method for learning the Bible?”

He hasn’t answered yet, but I think he’s almost going to have to say yes. And then I’ll tell him, “Then by your own principles, it’s my duty as a Christian to ignore everything you’ve told me about the Bible through this inferior means.”

He’s saying, “Listen to my teaching: Don’t listen to anyone’s teaching.” It’s impossible: I couldn’t follow his instructions without disobeying them!

The Bible says we need teachers. We need each other. Scripture holds the place of authority for Protestants, but thank God for books that can teach us the wisdom of centuries. Be very, very cautious around people who say we only need the Bible. Logic, history, and the Bible itself teach us they’re wrong.