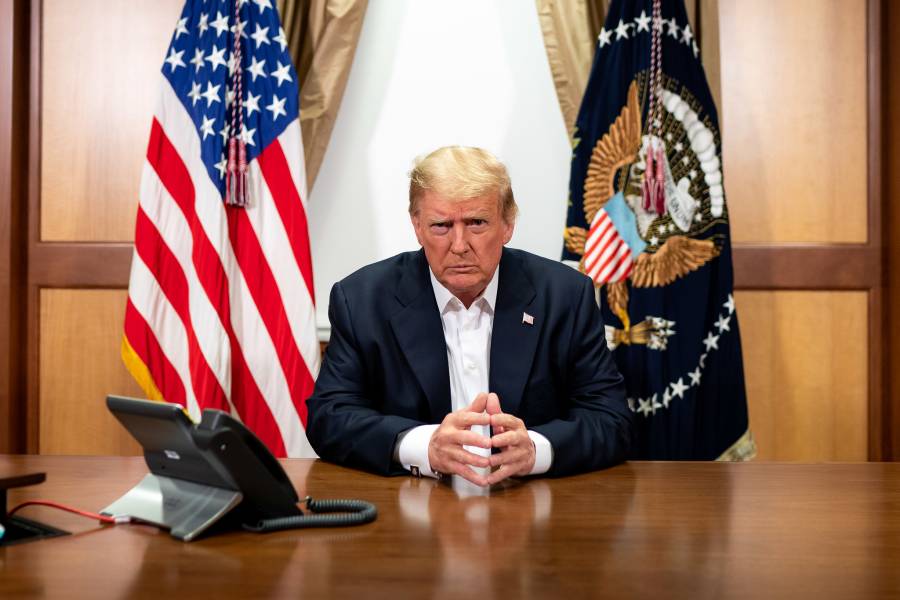 Exactly four weeks remain until America decides its fate. And in the past 24 hours the choice could not have been made any clearer.

Put more succinctly. It’s a choice between a fighting spirit and a fearful spirit. And when has America ever chosen to be fearful?

President Trump Hammered for Saying “Do Not Be Afraid of COVID.”

The media lost its collective mind over Trump saying after leaving the hospital “Do not be afraid of Covid.” (They went extra bonkers over Trump taking his mask off in his own house.)

Oh, how far Democrats have come. In 1933, Democratic icon Franklin D. Roosevelt spit in the eye of the Enemy. He told Americans suffering from the ravages of the Great Depression, “The only thing we have to fear is fear itself.”

Hearing that, today’s media would be knocking FDR out of his wheelchair (if he were a Republican). “He is downplaying the severity of the Depression! How dare he say don’t fear. Doesn’t he know millions and millions of people are suffering? People are jumping out of high rise windows! Losing their homes, their farms, their businesses, their lives! There’s no end in sight! ”

Yeah, Roosevelt knew. And he knew fear created more paralysis than polio could ever imagine. Just as Trump knows that fear can wreak more destruction than a disease.

Both presidents knew our history. Americans didn’t hide in basements in 1775 when the most menacing army on earth came marching across the village green.

Americans didn’t cower in the face of fierce Confederate volleys in the fight to end slavery.

After 9/11, with radical Islamists still gunning for our heads, we didn’t hit the bunkers. We hit the streets and returned to our lives. We kept our eyes open. We took precautions. But we didn’t give into fear.

The Bible is very clear. “For God has not given us a spirit of fear, but of power and of love and of a sound mind.” (2 Timothy 1:17 NKJV)

The choice on November 3 is not between two men. It is between a spirit of fear and the spirit of God. Which spirit promises a stronger, brighter future for America? Which choice reflects the “Land of the Free, Home of the Brave”?

Yesterday, New York Democratic Governor Andrew Cuomo pinned COVID issues in his state on houses of worship. He openly threatened Orthodox Jews and their synagogues. “I have to say to the Orthodox community tomorrow, ‘if you’re not willing to live with these rules, then I’m going to close the synagogues.'”

The First Amendment be damned.

Is there any doubt Joe Biden and Kamala Harris would do the same nationwide if given the opportunity?

Joe Biden during his NBC infomercial — I mean town hall — again tried to socially distance himself from socialism. He repeated his now familiar line: “Do I look like a socialist?” He pointed out, “I’m the guy that ran against the socialist” Bernie Sanders. But he then picked as his running mate a woman who is actually more leftist than Sanders.

As Tristen Justice at The Federalist reminds us, Biden may have ran against Sanders, but he’s embracing him today. As Justice writes, Biden

signed onto the 110-page “Unity Task Force Recommendations” in an agreement hammered out by teams of the two former rivals. Sanders clearly emerged having secured a socialist nominee for the Democratic Party after all by guaranteeing Biden will support fully taxpayer-funded college tuition, tripling the Clinton tax hikes, and threatening officers for securing the nation’s borders.

Biden’s proposals add up to $10 trillion in new government spending.

Biden is a con artist. When Biden is talking to national audiences, as he was last night or in last week’s debate, he denies having anything to do socialism. But when he’s speaking to local groups in swing states, he boasts how progressive he is going to be.

There are Nigerian princes sending you emails who are more honest.

Biden has 14 point lead! Or so scream the headlines. The poll from NBC/Wall Street Journal certainly raises eyebrows, as it shows Joe Biden gaining 53% versus Trump’s 39% in national polling.

One problem, says Breitbart. It over-sampled Democrats. Breitbart looked into the poll and discovered it over-represented Democrats by 6% and under-represented Republicans by 1%. Meaning, the poll is weighted a full seven points toward Democrats. And that doesn’t even take into account the margin of error and the percentage of people who are lying to pollsters.

So what is the status of the race? An IBD/TIPP poll out Friday puts Biden up three nationally and dropping. A Sunday Express/Democracy Institute Poll released Saturday has Trump up one. Both are well within the margin of error. In other words, the race is a toss up.

Finally, Joe Blames Trump for Getting COVID, But Hides His Own Health

Biden was asked if Trump was responsible for catching the virus. Biden responded, “Anybody who contracts the virus by essentially saying masks don’t matter, social distancing doesn’t matter, I think is responsible for what happens to him.” Did you catch that? Trump caught the virus by talking. Joe Biden has absolutely no idea how President Trump caught the virus. Given that some of people wearing masks and social distancing at the Amy Coney Barrett announcement caught it, given the bubble the president is in, given the extensive testing of those coming in contact with the president, given the virus’ highly contagious nature, to say Trump got it because of anything he said … let alone did … is bogus. Biden is saying Trump deserved it.

Meanwhile, Biden is much less open about his own health issues. He admits that this wouldn’t change should he become president. “I can understand there could be certain circumstances relating to national security, where every detail would not be made available in the middle of a particular crisis,” he said, the Washington Examiner reported.

Biden’s already being circumspect. As The Blaze reports, “Biden’s campaign has downright refused transparency regarding COVID-19.” They also refused to allow Biden to take a drug test before the first debate, amid rumors his staff was juicing him up.

And remember, when asked if he had taken any cognitive tests, his response was to ask the black journalist, “Are you on crack?”

While President Trump has to be tied down at the White House — figuratively only at this point — family members and other top surrogates are vowing to up their game with what is being called Operation MAGA.

They’re getting some help from Trump supporters. Some brave soul put up a huge Hollywood-style Trump sign up above L.A.’s 405 Freeway. Not all of Los Angeles is MAGA Country, for sure. But for a while at least, the Sepulveda Pass is.

Someone put up a Hollywood-style Trump sign on the 405 pic.twitter.com/eCqtoIwN5q