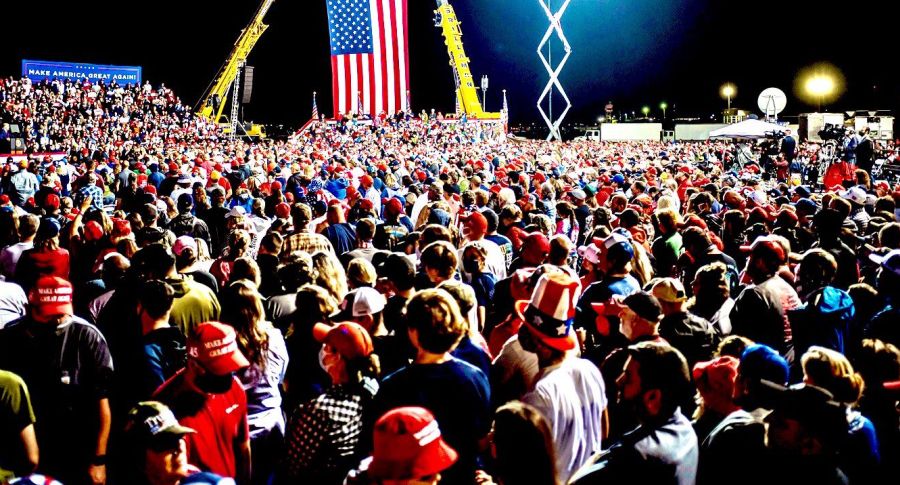 It’s done. It’s over. No need to vote, Trump supporter. Just toss the MAGA hat in the closet and prepare to welcome Queen Kamala. I mean, President Biden. Well, that’s what the mainstream media is trying to tell you: Joe Biden has this election in the bag. “Just look at the polls.”

A much touted NBC News/Wall Street Journal poll has Biden up 14% nationally. CNN has him 16% up. The Real Clear Politics average sits with Biden up 9.6. Joe and Kamala don’t have time tell you how they are going to pack the Supreme Court to ensure that radical justices rule for the next century. They’re too busy picking out curtains for the Oval Office.

Others can take a deep dive into the polling methodology to show you how the polls are skewed. I want to show you three other numbers that suggest something altogether different is going on in the real voting world.

Here’s the first one: A majority of voters say their life has improved under President Trump. In the tight 1980 election between incumbent Jimmy Carter and challenger Ronald Reagan, Reagan asked a simple question to American voters: “Are you better off now than you were four years ago?”

The answer was a resounding “No.” Reagan went on to win.

This year? Despite being in the middle of a pandemic, which gave the American workforce a brutal blow to the gut, 56% of Americans still say they are better off than they were four years ago. No surprise, given the booming pre-COVID economy, expanded opportunity, lower taxes, higher wages, lower drug prices, higher efficiency of government services, etc.

Is it logical to think voters are going to fire Trump — who helped improve their lives since the past administration — to rehire Biden, the #2 person in that previous administration? Are Americans going to go backwards? Are we really Israelites begging to return to the security of slavery in Egypt? (There’s a sermon for ya, pastors.)

In this vicious anti-Trump climate, folks are not necessarily going to tell pollsters the truth about their own voting plans. But they will be more honest about others’ plans. In fact, there is one train of thought that says people are actually telegraphing their own voting preference when they say how they think their neighbors are going to vote.

How big is the so-called “silent majority”? There’s no way to know until Election Day. But it’s there. For example, a Monmouth survey in Pennsylvania over the summer showed 57% of registered voters believe there is a “silent vote” in their community for Trump.

I suspect a lot of Democrats can’t stand Trump, but see the radicals taking over the party, hate the BLM and Antifa rioting, loathe the draconian restrictions Democratic governors and mayors have put on their lives. They’ve been stewing for months: “I can’t go to church or go to my grandmother’s funeral, but it’s fine for ‘protesters’ to tear through the streets?!”

But the thought of voting for Trump has them in a fix. They are like so many evangelical voters in 2016, who couldn’t imagine voting for Big Bad Orange, but in the last weeks bit the bullet and chose what was best for America’s future. That’s the silent vote I’m curious about. “I’ve voted Democrat all my life, but this time I just can’t.”

Know there are conservatives who felt the same way in 2016, Democratic friends. You should read this wonderful article from David Sound in The Federalist. The title says it all: “I Didn’t Vote for Trump in 2016, But I’d Crawl Through Glass to Vote for Him Now.”

Rushing to Hear the President

Did you tune in to hear President Trump’s two-hour chat with Rush Limbaugh Friday? You were far from alone. According to one estimate, 50,000,000 people tuned in. 50 MILLION. Five-Zero. For reference, Rush, by far the most popular radio host in America, averages about 15 million listeners a week.

Look at this another way: In 2016, Donald Trump got roughly 63 million votes. So, Trump drew 80% of his vote total. For a radio show. In the middle of a work day.

Meanwhile, Joe Biden and Kamala Harris had their first joint campaign appearances Friday in Arizona. Check out the size of the crowd in Yuma.

.@JoeBiden and @KamalaHarris bus came through Yuma! So many supporters excited to finally be able to cast their vote for #BidenHarris pic.twitter.com/Bb6eRSUalM

Help me understand this: 50 million people turned into a radio show just to hear Trump jaw-bone with Limbaugh. Biden and Harris together get about 40 people to come out in a swing state weeks before the election. And Trump is losing?!?!?!?

Which gets to a third number that suggests something different is going on in the real voting world: The enthusiasm gap between the two candidates is off the chart. A Fox News survey has 59% of Trump voters enthusiastic about voting for Trump. Only 43% for Biden.

The socialist magazine Jacobin is fretting that this enthusiasm gap could push Trump to victory. The “really scary part”? At this point in 2016, Hillary Clinton was beating Trump when it came to enthusiasm 44% to 43%.

This could be Trouble with a Capital T, as the song goes.

An analysis published in the academic publication Electoral Studies in 2014 suggests how enthusiasm gaps play out in the actual voting booth. Researcher Seth J. Hill at the University of California, San Diego reached three conclusions:

Don’t Let Your Spirit Be Suppressed and Depressed

Please understand what the media is doing when they publish weighted polls showing Biden way ahead. Why 95% of their coverage of Trump is negative. Why last weekend they had Trump at death’s door. Why even when Trump is bouncing off the walls and yapping up a storm, sounding fit as a fiddle, CNN is obsessing that Trump coughed a couple times during an interview with Hannity.

While ignoring Joe Biden not only coughing, but violating COVID protocol, defeating the whole purpose of masks, to remove his mask and cough in his hand during a speech Friday.)

You can't make this up.

Joe Biden just removed his mask to cough in his hand.

As a working arm of the Democratic Party, the mainstream media wants to suppress enthusiasm. They want to suppress the vote.

They want to suppress and depress Americans.

Now that you are on to them, neighbor, you know what to do.