East Bound and Down on Vax Mandates: ‘Freedom Convoy’ Heads to Canada’s Capital 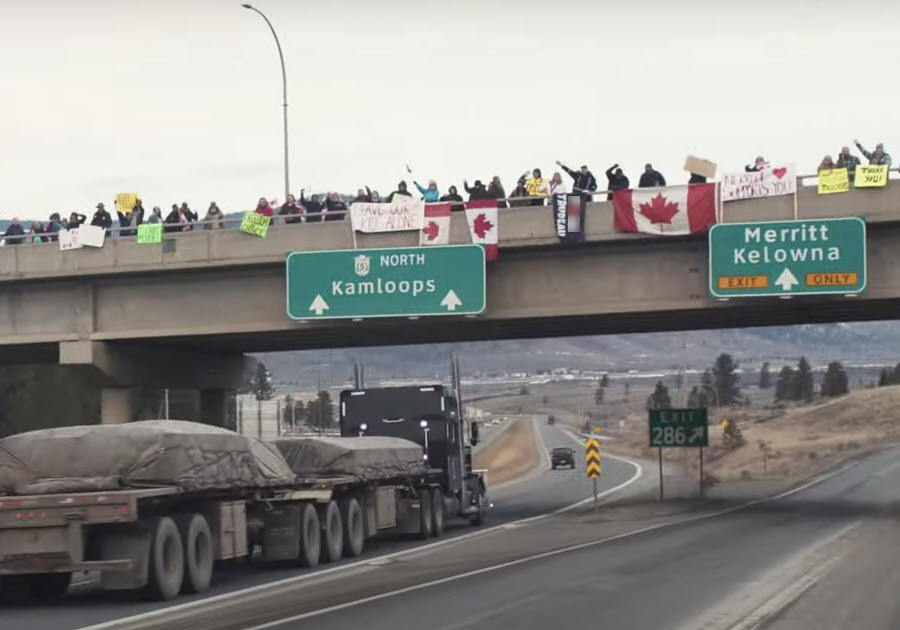 “Eventually, our fuse — our long, long fuse — burns out. And that’s where we are in this country.” So said Canadian hockey legend, Theo Fluery, as an estimated 50,000 truckers head toward Ottawa for a day of protest against COVID-19 vaccine mandates tomorrow, January 29. Fluery, referencing the stereotypical kindness and long-suffering patience of Canadians, expressed his frustration with their government. His ire is aimed especially at Prime Minister Justin Trudeau, who, Fleury claims, is suffering from “Vaccine Derangement Syndrome.”

As of January 15, all truck drivers crossing over the border from the U.S. into Canada must show a valid vaccination card. Currently, unvaccinated or “partially vaccinated” Canadian drivers will be allowed back in, but with hefty requirements:

Transport Minister Omar Alghabra says truckers have had more than enough time to comply since the mandate was passed in November. Both he and Trudeau have said that around 90% of them are already vaccinated, comparable to the rest of the country’s population. The Canadian Trucking Alliance (CTA) suggests that only about 32,000 cross-border truckers will be impacted.

The Boys are Thirsty in Ottawa

So why are so many more truckers — and possibly up to 2 million people — en route to Canada’s seat of government? Maybe, as Jordan Peterson recently wrote, it’s because they’re exhausted by officials blaming supply chain issues on the “pandemic,” rather than on the “unending and unpredictable stream of restrictions, lockdowns, regulations and curfews.” Maybe it’s because the “science” touted by the government doesn’t seem to match the reality of the situation. Peterson again:

The cure has become worse than the disease … . The idea that Canadian policy is or should be governed “by the science” is not only not true, it’s also not possible, as there is no simple pathway from the facts of science to the complexities of policy. We are deciding, by opinion poll, to live in fear, and to become increasingly authoritarian in response to that fear.

Alghabra states (in the same interview linked above) that the vaccine provides a 50% better chance of keeping COVID patients out of the hospital. That’s great! But it’s a lot different than saying it prevents infection and transmission. Truckers typically lead mostly solitary lives. The vast majority of their work hours are spent in their truck cabs. That makes their danger of transmission minimal compared with other professions.

We Got a Run to Make

As frustrating as all the regulations must be, there may be a deeper, more personal motive for the convoy. Like us “deplorables” here in the U.S., these truckers (and others) are sick of being denigrated and marginalized by their elected leaders.

The CTA released a statement of objection to the Freedom Convoy; that it’s “not how disagreements with government policies should be expressed.” It goes on to state that “displeasure over government policies” should be expressed through an “organized, lawful event on Parliament Hill” or by contacting local government representative. But isn’t that the point? These people no longer feel that their “representatives” care about their legitimate concerns. Even more provocatively, Trudeau himself called the convoy a “fringe minority” with “unacceptable views” that do not represent Canada. Trudeau’s comments would be amusing (considering he lost the popular vote) if they weren’t so condescending.

Prime Minister Trudeau says the “small, fringe minority” on their way to Ottawa “hold unacceptable views” and are undermining the rights, freedoms and values of Canada.

Trudeau and other government officials imposing vaccine mandates have a problem of optics, and it’s growing. Despite how they would like to paint the convoy as a small, racist, alt-right group of agitators, this “fringe minority” is increasing. Quickly.

What They Say Can’t Be Done

Perhaps the most surprising theme one finds recurring in the thread, #TruckersForFreedom2022, is not anger, but joy. There’s celebration, camaraderie, and yes, hope. It’s reminiscent of the Trump rallies of 2020.

It’s truly amazing to see so much patriotism, unity and energy coming from Canadians. The light of this seems even brighter after two years of such collective depression and division #TruckerConvoy2022 #TruckersForFreedom2022 https://t.co/rvfOIYLRk4

Even Elon Musk is getting in on the fun:

Ol’ Mounties Got Them Ears On

Of course, comparisons are already being made to January 6, with Canadian Security Intelligence Service (CSIS) closely monitoring the event. Some are concerned that “extremists” within the movement intend to use legitimate and focused protest as a cover to commit violence. Canada Unity, the organization behind the rally, is making every effort to prevent it from being hijacked by provocateurs. They recognize what strategic advantage January 6 became to the Democrats in America. On Thursday evening they posted a long list of “rules” to their Instagram page about how to act, what to say, what not to say, and what not to bring. Most telling is this one:

Once in Ottawa, under no circumstance should anyone enter a federal building. If they open the doors and invite you inside DO NOT ENTER; it is a trap! If they offer cash money for you to enter don’t go inside; that is what they want you to do. They want a repeat of January 6th but in Canada so that it gives JT the justification he needs to call in the military and build a fortress around the capitol.

Two of the organizers of the event set up a GoFundMe page to raise funds for fuel, food and lodgings. As of Thursday evening, they had raised nearly all of their $7 million goal. Earlier in the week, however, GoFundMe refused to release those funds until a “clear plan” had been established. It now appears that they have come to a mutually agreeable solution. GoFundMe will directly pay bulk fuel suppliers, and “Any left over donations will be donated to a credible Veterans organization which will be chosen by the donors.”

Long Way to Go, Short Time to Get There

I reached out to an old friend in Canada, an Ottawa native, to get his perspective on this. He said most people he’s spoken to are in support of the truckers. He even joked about getting a t-shirt that says, “I’m vaccinated and I support your right not to be.” He’s on to something there. Given just how many people are now expected to arrive in Ottawa by Saturday, I would bet a significant portion of them are vaccinated. They just oppose the mandate.

So as the convoy of vehicles, from Peterbuilt to Prius, gathers in full this weekend, my prayers are with them. May God protect and bless all our dear friends to the north. And may He lead them to that wonderful table of reason together.

Note: If you missed the cultural references in the title and subheads, or are just feeling nostalgic, do yourself a favor and enjoy this timeless Jerry Reed classic. It’s been in my head since I first heard about the convoy. Fitting, I think.

John Melton is the Editor-in-Chief of The Stream. He has worked for LIFE Outreach International, The Stream’s parent organization, for more than 16 years. He has a background in theology, philosophy, and music. Most of his professional career has been spent in non-profit administration, marketing and event planning.