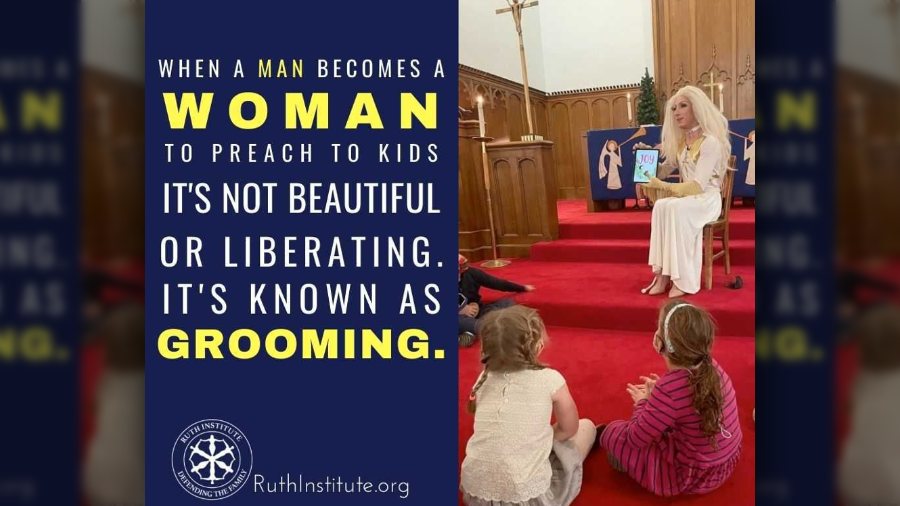 St. Luke’s Lutheran Church of Logan Square in Chicago recently had a “Drag Queen Prayer Hour,” where a newly ordained pastor, Aaron Musser, in a dress and wig led a service for children.

The Post Millennial reports: “‘I have an awesome story to share with you today,” Musser told the children, flipping his long blonde hair off his shoulders. He asked the children if they’d ever seen a drag queen before, and they had not. He offered surprise at this fact. ‘I am also a boy most of the time when I’m here,’ he told them, ‘but today,’ he said, flipping his hair back and forth, ‘I’m a girl.’ After reading, he led a prayer.”

“The Sexual Revolutionaries seem to be daring us to say something,” she added. “So, I’ll say something. This is wrong. If a man needs to put on a dress in order to be joyful, he is not well.”

“Clearly, Aaron Musser rejects God and God’s creation, in favor of himself and his self-creation. This group of people that calls themselves a Christian congregation, in a building they call a church, has made a mockery of God, His church and His people.”

The Ruth Institute has opposed Drag Queen Story Hour in libraries and transgender indoctrination in children’s television. The Institute also has a Transgender Resource Center with more information.

Helping the Victims of the Sexual Revolution

When Dr. Jennifer Roback Morse of the Ruth Institute decided in 2013 to focus on the Survivors of the Sexual Revolution, she had no idea where God would take her work. She just knew that millions of people had been harmed, and millions more were being seduced every day.

Catherine Glen Foster is one such person who was harmed by the Sexual Revolution. She got pregnant as a teenager. Listen to how she was pressured into an abortion she didn’t want.

Millions of children are killed in their mothers’ wombs, and millions lose their homes, their routines, their connections with one of their parents due to divorce. Kids aren’t as resilient as we’ve been led to believe. Listen to Dan and Bethany Meola talk about how their marriage was affected by the divorce of Dan’s parents when he was a child.

A family’s routine can also be turned upside down by abuse. Learn from Alex Peyton how the abuse of his younger brother affected the entire family.

Some abuse is self-inflicted. Listen to Billy Burleigh describe his attempt to become a woman and the irreparable price he paid with his body.

Also included in this video:

Are Conversion Therapy Bans Based on Lies?

The newest video release from the Ruth Institute’s Summit for Survivors of the Sexual Revolution features body language expert and Human Behavior Lab founder, Susan Constantine. In this video, Constantine describes her three-pronged approach to analyzing the testimony of Sam Brinton, who gained international acclaim for saying he was tortured during conversion therapy for same-sex attraction. What Constantine’s team discovered, however, is that Brinton’s story is primarily a fabrication. Legislation banning conversion therapy (or Sexual Orientation Change Efforts) was based on his string of lies. Listen as Constantine breaks down the deception evidenced in Brinton’s false testimony.