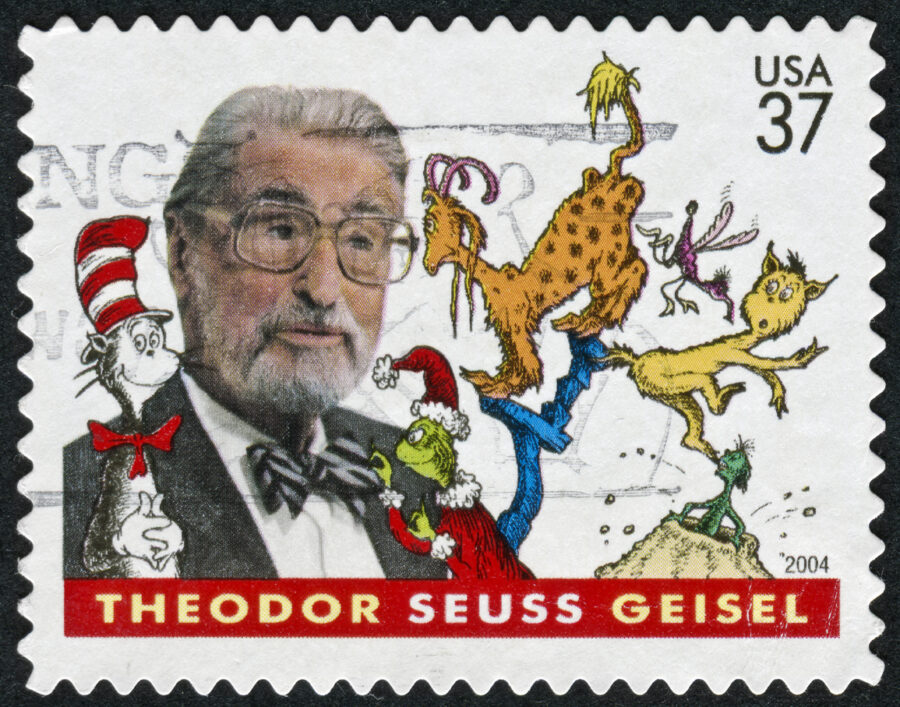 A 2012 stamp featuring "Dr. Seuss," Theodor Geisel. Appropriate, given recent events, it is a cancelled stamp

Want to guess what will next be targeted for destruction by the Fanatical Leftist Cancel Cancer? Think “What has been enjoyed by generations of Americans of all stripes? What has bound us together as Americans through times good and bad? What do normal people love?”

But who would have thought they’d come after Dr. Seuss? Last week, could you have found a liberal in American who didn’t love Dr. Seuss’s books? The Grinch? Horton Hears a Who? Green Eggs and Ham? That Dr. Seuss?

What could he have done? The legendary children’s book author committed the great sin of being of his time. In six of his books the Woke Police find images it declares are offensive caricatures of Blacks and Asians. As if everything Dr. Seuss drew wasn’t a caricature of something. The Woke Police have no problem with vile, trashy, racial stereotypes in current popular music — Hello, Carli B. — but a racial stereotype from 60 years ago must go.

Even Joe Biden, who’s made a career of offensive racial stereotyping, has joined in the cancelling of Dr. Seuss.

They started with six books, but where will they stop? How soon before Whoville is cancelled because it’s not a sanctuary city? Before Woke Vegans and Muslims go on the march over “Green Eggs and Ham”? Before the Grinch is seen as a hero for trying to wreck a Christian holiday? Before “A person’s a person, no matter how small” is an attack on abortion rights?

The Woke Police are also not happy that, of Dr. Seuss’ human characters, only a small percentage are people of color. And yes, it is true that the few human characters of color are in stereotyped subservient roles. Not good. But not surprising for the times.

But isn’t that our first clue to how far into the surreal their hunt goes for the scalp of Dr. Seuss?  They have to distinguish “human” characters in his fantastical works from animals and creatures in order to cancel him. (While ignoring his consistent message that all should be treated as equals.)

Maybe the Cat in a Hat gets a pass because he’s black and white.

Is All Entertainment from the Golden Age in Danger?

We joke. We see the absurdity and silliness of targeting Dr. Seuss, of all people. But we cannot laugh it off. Because the Woke Police aren’t joking. They’ve got their standards and they’re going to try to enforce them on everything that doesn’t meet them. No matter how good, how funny or insightful or wise — no matter how liberal. If it’s not woke, eventually the Woke Police will get to it, and then it’ll have to go.

Yeah, it’s a shame Hollywood was lily white. But do we kick the shows of that era off cable? Burn the tapes? Give up TV westerns? Your Show of Shows? Perry Mason? Declare Dennis a true White Privileged Menace? Cancel such TV luminaries as Jackie Gleason, Milton Berle and Lorne Greene?

How about canceling The Dick Van Dyke Show’s creator and co-star Carl Reiner … or does he get a pass because his son Rob Reiner is a famous Hollywood liberal?

But wait. By the new Woke standard, Rob Reiner himself should be on the target list. His first movie didn’t have any major black characters. In fact, Spinal Tap famously went through how many dozens of drummers … and no blacks.  His second movie The Sure Thing didn’t have any black stars. Worse, it featured a heterosexual romance. How exclusionary.

Then came The Princess Bride. No blacks. A heterosexual romance.  And what about that stereotype of witches being old, wrinkly and ugly? All totally unacceptable. Allowing Princess Bride to be broadcast? Inconceivable!

Exaggerations? Do you think so? They just cancelled Dr. Seuss!

If television’s golden age will have go, classic movies will have to go too. Already, perhaps to ward off its whole network being pressured off the air, Turner Classic Movies (TCM) will now air a series on “problematic” classic films. Gone With the Wind — only the most popular and one of the greatest movies of all time — already gets the Woke treatment, with disclaimers running before the flick.

But where does it stop? What will we lose? Tuesday night, I watched for the first time, the 1948 classic Judy Garland-Fred Astaire musical Easter Parade.

All the characters are white, but one. A young black woman who catered to entertainer Nadine Hale’s every whim, told her everything she wanted to hear. “Oh, Miss Hale. You’re waaaay better than she is.” The character was barely a step up from Prissy in Gone With the Wind.

In this great number, Fred and Judy as “Hannah and Hewes” audition for Ziegfeld’s Follies. Do you enjoy the razzle-dazzle? The unmatched grace of Astaire? The booming voice of the incomparable Judy Garland? Or do you get caught up in the fact that all the performers sitting around the stage are white? (FYI: The film is set in 1912.)

Let’s find another red flag for the ravaging, fanatical leftists. One of the film’s most famous scenes: the number “A Couple of Swells.”

For generations, movie fans of all colors and stripes have been delighted by the number. And treasured the fact it features two of the greatest entertainers our nation’s ever produced teaming up and having the time of their lives.

But in the bitter, joyless Cancel Culture mindset, the radical, fanatical Woke would only see two famous rich white people making fun of poor people. They’ll see class prejudice. They’ll fret that the movie teaches people to look down on the homeless. “Steppin’ Out With My Baby”? Baby demeans womxn! And don’t forget the one subservient black character.

At some point, unless they’re stopped, the Woke Police will demand that as harmless a film as Easter Parade be taken offline. Gone will be the joy of watching two great performers at the top of their game, the pleasure of a good story, the enjoyment of a beautifully made movie. A life-affirming story. And an American classic, one of the works that tells us who we are. But not Woke. Out it goes.

You can almost hear Judy Garland respond, “Toto, we’re not in America anymore.”

But we are still America. We still have a voice. There are still vastly more people who believe in common sense over cancel culture. Which is why from Broadway to Kansas to Mayberry to the Twilight Zone to Whoville, we must fight to support and protect the creative treasures of our past.

As Astaire famously sang during another moment of American trial, “Let’s face the music, and dance.”