Charges that Dr. Oz is an "Islamist" or a puppet of Turkey are false. 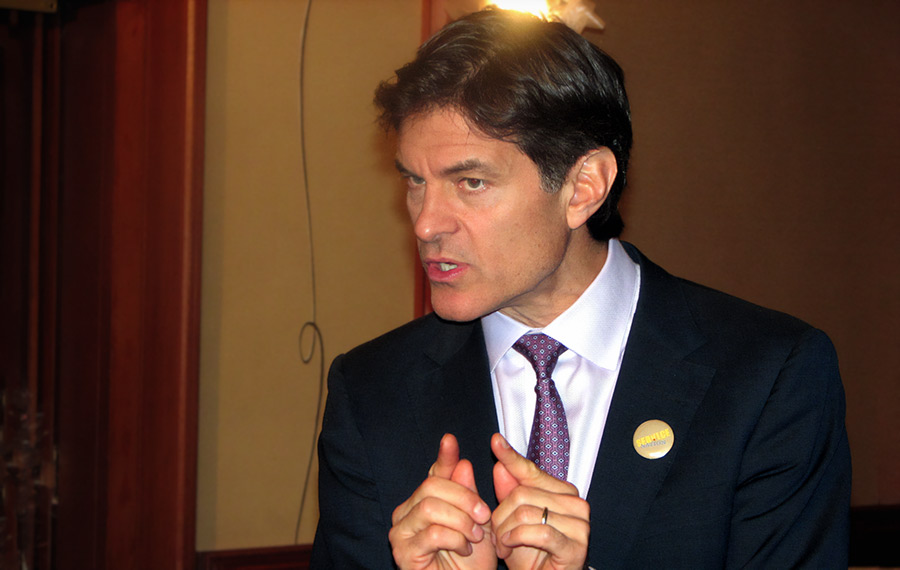 There are currently three Muslims in the U.S. Congress. All are in the House. All are Democrats. Two, Ilhan Omar and Rashida Tlaib, are practically household names. No U.S. Senator is a follower of Muhammad. But Dr. Mehmet Oz hopes to change that. As a Republican. Oz is a heart surgeon, multimillionaire, TV celebrity and best-selling author.

He is thus a formidable candidate in the Pennsylvania Senate race. The latest polls have him slightly ahead of former Bush Treasury official and hedge fund manager David McCormick. And just last week, former President Donald Trump endorsed Oz, which some analysts see as “risky.”

An Impressive Background — But Not Without Flaws

Oz does have an impressive bio. His parents were Turkish, his father a cardiothoracic surgeon. Mehmet was born in the U.S. (so he’s not technically an immigrant), but lived in Turkey for much of his childhood. He went to high school here, then to college at Harvard where he played football. Oz then earned both a M.D. and MBA from the University of Pennsylvania. In-between he did a mandatory two-year stint in the Turkish military to retain dual Turkish-American citizenship.

His medical career included assisting with a heart transplant of Joe Torre’s brother Frank, then a professorship at Columbia University medical school. Oz also patented several cardiac medical devices. He then began appearing on Oprah Winfrey, eventually getting his own show in 2009. He has written eight books that made the New York Times’ best-seller list.

Oz used to bill himself as a “moderate Republican” (like Arnold Schwarzenegger), but upon announcing for the Senate that became a “conservative” one. He has been criticized, however, for his sympathy to transgenderism and his Clintonesque position on abortion.

Guilt by Association With Erdoğan?

Dr. Oz has come under heavier fire, however, for his alleged political allegiances. Primarily to Turkish President Recep Erdoğan, but also to the Communist Chinese dictators. The first salvo against Oz was launched last December by Benjamin Baird in National Review. (Baird works for “Islamist Watch,” created by Dr. Daniel Pipes.)

Baird’s indictment of Oz is, however, largely of the “guilt by association” variety. For example, he claims that

the doctor’s ties to Turkey extend beyond family relations and citizenship status to the highest reaches of government office. This includes a 2014 encounter with President Recep Tayyip Erdoğan.

But the link to this encounter simply goes to a November 9, 2021, article entitled “Dr. Oz Prepares to Jump into Pennsylvania Senate Race.” Which includes an undated picture of Oz shaking hands with Turkey’s President. Not exactly damning.

Baird also lambastes Oz for linking arms with prominent AK Party politician Abdulhamit Gūl at a Turkish heritage parade in Brooklyn. But AK is the ruling party in that country — which is, still, a member of NATO and U.S. ally. Baird also excoriated Oz for serving as a spokesman for Turkish Airlines. Why? Because that airline is state-owned, and “staffed by leading AKP figures close to the Erdoğan family.”

The NR piece also questions Oz’s attendance at a Diyanet Center of America mosque in New Jersey. Because its “ownership, administration and control is subordinate to the Presidency of Religious Affairs of the Republic of Turkey.” Well, yes. Turkey’s government, like that of many majority-Muslim nations, supports Islam. The government branch which does that is Turkey is known as the Diyanet Işleri Başkanlığı, or “Directorate of Religious Affairs.” This department finances mosques both in Turkey and overseas.

Non-Muslims may not be comfortable with this. But there is nothing nefarious about it. Baird’s attempted take-down of Dr. Oz gets ever sillier. He maligns Oz for frequenting a Turkish restaurant in Manhattan where an employee, five years ago, “claimed that he was fired, assaulted and called a ’terrorist’ after the establishment’s owners learned he was a Kurd… .” That’s hardly evidence of any neo-Ottoman inclinations on Oz’s part.

Baird’s whole approach is basically “When did Dr. Oz stop beating his wife?” It’s quite unconvincing, and frankly should embarrass NR.

A Sounder Critique of Oz

At least Josh Rogin’s WaPo critique of Oz (February 16, 2022), “Would Turkey’s President have Leverage over ‘Senator Doctor Oz?’,” is presented as “opinion,” not factual news. One of its major points is Oz’s dual citizenship. But this is now moot, as last month the candidate said he would renounce his Turkish citizenship if elected.

Rogin trots out several of the same criticisms as Baird, which start to look like cavils. Mainly interactions with top Turkish business and government officials who, unsurprisingly, belong to the AK Party. This article also quotes Turkish NBA player Enes Kanter Freedom to the effect that Oz is “in Erdoğan’s pocket.” But there is no proof presented.

After a thousand or so words impugning Oz, Rogin ends with this quote from Steven Cook, senior fellow at the Council on Foreign Relations. “Is [Oz] really an agent of the government? There’s not really any evidence of that.” And to be fair to Rogin, he does note that

Erdoğan likely doesn’t like some of the stands Oz is taking during this campaign, including his defense of Gulen and his opposition to Turkey’s purchase of advanced missile systems from Russia.

(Fethullah Gülen is a Turkish Sufi leader, who has lived in the U.S. for decades. Erdoğan has accused him of being behind the abortive 2016 coup there.)

Just last week, Jacob Bliss at Breitbart went after Dr. Oz for Chinese, not Turkish, connections. “Mehmet Oz’s China Ties Deepen: Financial Disclosures” accuses Oz of being the Mike Lindell of the PRC. He is said to have “a partnership with ‘Utah-based Malouf Companies that used his name and identity on numerous sleep products that were made in China which netted Oz between $1 million and $5 million last year.”

Last month Bliss claimed that Oz was “kowtowing” to China. How? Via involvement in a multilevel marketing plan with Usana, another Utah-based company that produces vitamins and nutritional aids. And by saying in a 2018 interview in China that he “did not think trade wars are worth it.” Again, much ado about very little.

Undoubtedly Turkey’s President has been a bad hombre in a number of ways. One can plausibly argue that he wants to resurrect the Ottoman Empire. He has been horrible to the Kurds. And Erdoğan arguably allowed ISIS to target the Christians of northern Syria — if he didn’t actively encourage it. These are still damning, even if his more recent actions — rapprochement with Israel, helping the Ukrainians vis-a-vis Russia — appear more reasonable to the West.

But No One Has Tied Dr. Oz to Him Yet

But no one has proved that Dr. Mehmet Oz is sympathetic to Erdoğan. Much less that he’s “in his pocket.” In fact, Oz stood up for the Turkish President’s most hated enemy — Fethullah Gülen. Also, indications are that far from being a hardcore Sunni Muslim, Oz practices Sufism, or Islamic mysticism. Leavened with the Christian mystical teachings of Emanuel Swedenborg.

Dr. Oz certainly has a penchant for making money, self-promotion, and questionable, quasi-legitimate therapeutic medical remedies. But he’s smart, famous and Republican. As long as no solid proof surfaces that he’s in league with Erdoğan, the GOP could do worse than electing him as the first Muslim to the U.S. Senate.