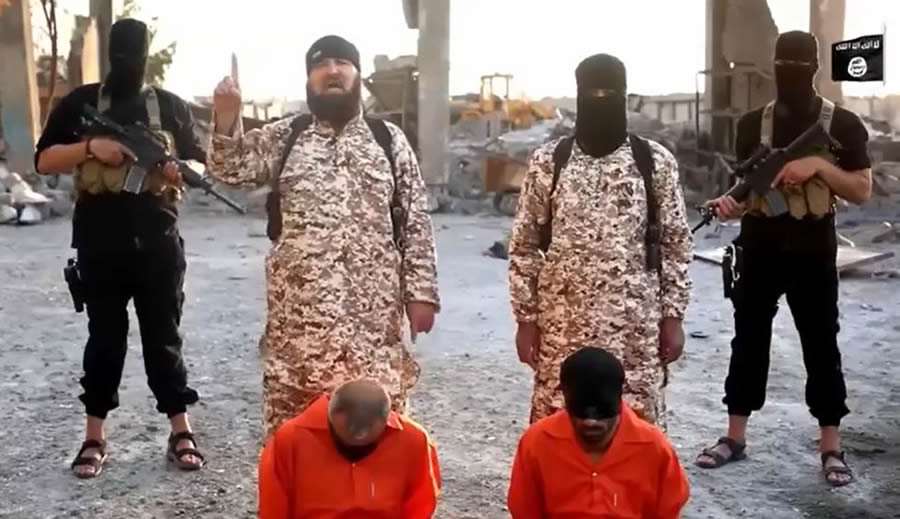 The U.S. raid was aided by our much-abused allies, the Kurdish-led Syrian Democratic Forces (SDF). The attack led Baghdadi to ignite his suicide vest, killing himself and several of his children.

The Washington Post made a fool of itself by changing its headline —apparently to avoid offending ISIS supporters.

They had it right the first time.

The Washington Post changed the headline on its Al-Baghdadi obituary from “Islamic State’s terrorist-in-Chief” to “austere religious scholar at helm of Islamic State.” pic.twitter.com/cs243EVz7W

In the course of its obit, The Post actually referred to Baghdadi as a “conservative academic.”

No Dignity Deserved in Death

President Trump was right to crow about this accomplishment. And he was right to speak scornfully of Baghdadi even in death, noting that he died like a coward. Remember that this “austere scholar” oversaw rape camps, sex trafficking, and the burning of prisoners alive in metal cages. The group he led, ISIS (or the Islamic State) adopted all the most barbaric practices of early Muslim conquerors in the seventh and eight centuries. They reasoned that this constituted a return to primitive, “pure” Islam.

The “dignified” disposal of Osama bin Laden’s corpse under the Obama administration was morally inappropriate and strategically counterproductive. In an “honor” culture such as prevails among many Muslims, heaping humiliation on a defeated enemy offers a strong deterrent to those who would emulate him. (For more on Arab male “honor” and the toll it imposes on innocents, see Honor Killing, by Islamic scholar Daniel Akbari.) But we need to ask some tough questions about this happy event.

Will the Death of Baghdadi Lead to the End of ISIS?

Probably not. It might not even change the frequency or savagery of ISIS-affiliated terror acts around the world. Terrorism scholar Max Abrahms wrote the magisterial study of terrorist motivations and organization Rule for Rebels. I reviewed it here at The Stream. In it, he makes a key distinction. That is, between non-conventional warfare aimed at military or government targets, and “terrorism.” The latter rightly refers only to attacks against ordinary civilians.

Abrahms explains that groups which engage in “terror” attacks tend to fail at obtaining their political objectives. It turns out that people of every race and creed resent the murder of civilians, whatever the cause. Smart guerrilla groups impose firm control over their fighters, to minimize such counter-productive actions.

ISIS Was Always Out of Control

But ISIS did just the opposite. It reveled in torture and slaughter of civilians. And it gave murderous psychopaths around the world license to do the same, and give ISIS “credit.” Abrahms dubbed ISIS the “stupidest” militant group active today, and noted that it has failed at every one of its stated objectives.

So will removing a leader whose “stupid” policies didn’t impose any restraint on random killers around the world make much practical difference? Abrahms told The Stream what he thinks.

Baghdadi was never a strong leader even at ISIS’ height. He never did what strong militant leaders do. Specifically, he didn’t screen members for joining or tell them what countries not to attack or which targets to avoid. He had a hands off approach, empowering operatives and even lone wolves to make these decisions themselves. So the nature of ISIS violence will not change. Neither will the amount. This isn’t the type of group that kept its violence in reserve. It struck whenever it could.

So I was wrong. It’s NOT a new shoe line by Ivanka Trump. But that would have had more effect on the lives of Americans. https://t.co/kfAcuBxyXn

It’s no coincidence #Baghdadi was found in #Idlib, the remaining pocket of the Syrian opposition in the country. ISIS was always part of the opposition to Assad, the most extreme group but one which shared some ideology and members with Al Qaeda, the leading rebel group.

Why Was Turkey Sheltering Baghdadi?

Idlib, where Baghadi found refuge, was occupied by the al Qaeda-linked “Free Syrian Army.” This group is funded and controlled by … our “NATO ally,” Turkey. It’s the same group which John McCain, Mitt Romney, and the rest of the Neocomintern called “moderate rebels.” They wanted the U.S. to help it overthrow the Assad regime in 2016 by threatening to shoot down Russian planes. Had these “moderates” conquered Damascus, they would have purged a million Syrian Christians, and countless other religious minorities. We know that because it conducted such purges in Afrin, Syria. That’s the last place the Turkish Army handed it control.

It is absolutely beyond dispute that Idlib is largely under Turkish control. Turkey does not even deny its involvement in the region. There are Turkish observation posts (military camps) in Idlib. The Turkish jihadists are controlling it. Turkey regularly patrols through Idlib. Baghdadi, like many other ISIS terrorists, probably was regularly in and out of Turkey for medical care. Or else got it from Turkey while he was in Idlib. Of course President Trump knows this. He actually acknowledged during his campaign that Turkey supported ISIS.

Was Baghdadi’s Head the Payment for Trump’s Pullout from NE Syria?

According to the SDF, the U.S. has suspected Baghadi’s location for months, and known for weeks. Who held the operation up? Apparently, the Turks. CNN reports:

“In the past few days we confirmed where he was … and the information was shared with the US, especially with CIA,” he added.

The raid was the result of five months of joint work and coordination with American intelligence, but was delayed due to the “Turkish aggression,” he added.

Was Trump’s sudden decision to pull out of NE Syria, and let the Turks shatter the autonomous enclave where religious freedom prevailed, the price Erdogan demanded to let the U.S. act? Is one dead terrorist’s head (and a stupid one’s) worth creating 250,000 refugees? And ending U.S. influence in Syria? Perhaps only time will tell.